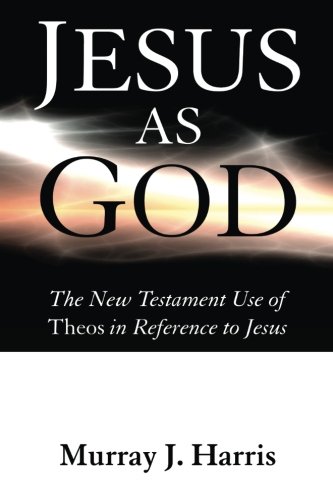 Jesus as God. The New Testament Use of ‘Theos’ in Reference to Jesus

Interest in the subject of Christology has seen something of a revival in the last ten years, in part spurred on by the ‘Historical Jesus’ seminar of the SBL. Very little attention has been paid in these meetings, however, to the NT application to Jesus of the Greek terms theos or to the definite article ho theos, both of which mean ‘God’ in some sense. Into this void comes Murray Harris’s helpful and detailed study.

This book is the fruit of long study and interest in the subject at hand, as is shown by the fact that it incorporates and updates in Chapters 7–9 material that Harris had previously published as articles. In this book one finds the sort of detailed exegesis, reflecting a precise knowledge of Greek grammar and syntax, that is all too rare in recent works on the NT. Nowhere is precision more needed than in dealing with as delicate a matter as the understanding of the term theos in relation to Jesus.

The basic thesis and indeed conclusions of the book may be summed up as follows: (1) while the NT generally reserves the term theos for God the Father (and apparently never uses it to speak of more than one member of the Trinity at a time, just as Yhwh and elohim in the OT do not refer to the Trinity), on seven occasions it uses the term, both with and without the definite article (‘the’) of Jesus (Jn. 1:1; 1:18; 20:28; Rom. 9:5; Tit. 2:13; Heb. 1:8; 2 Pet. 1:1); (2) when the term is used with the definite article, as it always is, except in John 1:1, 18 and Romans 9:5, it has a titular sense. When it is used without the article, the generic sense is stressed; (3) ontological Christology is both the basis and zenith of NT Christology. While the Christology of the NT is predominantly functional, except in the aforementioned seven verses, the functional Christology necessarily presupposes and is based upon ontological Christology; (4) ontological Christology is not a late NT development, as it is found immediately after the resurrection in the confession of Thomas recorded in John 20:28 and is also found in the mid-50s in the doxological statement in Romans 9:5; (5) ontological Christology is not limited to one author or regional development of early Christianity since it is found in the Pauline, Petrine and Johannine corpora as well as in Hebrews; (6) the terms theos and ho theos were frequently interchangeable in the NT.

Most scholars, of whatever theological stripe or degree of orthodoxy, will find Harris’s study both judicious and fair in its balanced treatment of most of the evidence. As Harris rightly admits, the heart of his case rests with the Johannine evidence, which is least disputed of all the texts cited, and except for John 1:18 has the fewest textual problems or ambiguities. For many, however, Harris will be thought to have placed too much weight on John 20:28, on several counts.

In the first place, the fourth gospel is the most disputed of all the gospels in regard to the amount of historical substance it conveys, and intends to convey. Harris by no means provides an adequate argument for the historical substance even of the crucial text in John 20:28, never mind in regard to the character of the gospel in general. In short, his arguments about this crucial material are not likely to convince any but those who are already convinced of the historical veracity of all or most of the fourth gospel.

In the second place, his argument that Thomas must have received the Holy Spirit in order to have made his confession, even though he was not present when Jesus is said to have spoken ‘Receive the Holy Spirit’ (Jn. 20:22), is exceedingly weak. It is not even clear that the rest of the 11 had yet received it either, as they were still huddled in the upper room behind closed doors (Jn. 20:26). It is much more probable that if John 20:22 records an historical occasion, it refers to Jesus’ prophetic promise of the Spirit through a symbolic prophetic gesture, not an actual bestowal of the Spirit. Otherwise, it is difficult to explain not only the sequel in John 20:26ff. but also in John 21, where the disciples are not out spreading the good news, but rather have gone back to their prior profession of fishing!

Thirdly, in regard to those texts which seem to be part of early christological hymns (e.g. the logos hymn in Jn. 1, the hymn fragment in Heb. 1), Harris fails to do justice to the sapiential character of this material, and in particular the close affinities it has with the material in Wisdom of Solomon and Sirach. It seems to me inadequate to argue that the resurrection appearances by themselves produced the high christological confessions of Thomas and others, especially in regard to Jesus being God. One must ask why Jesus’ resurrection must necessarily produce such a confession when previous acts of God by means of Jesus, when people were said to be brought back from the dead (e.g. Jairus’ daughter, the widow of Nain’s son, Lazarus), did not do so. Paul, in any case, is in no doubt that such a confession, if it is a true one, is possible only when one has the Holy Spirit in his or her life (cf. 1 Cor. 12:3b). And according to Acts 2, the Holy Spirit was not given until Pentecost.

I would urge that at least three factors led to the confession of Jesus as divine or as God: (1) the development of early Jewish sapiential thinking, which is reflected both in the teaching of Jesus and other early Jews as well as in the christological hymns in Philippians 2; John 1; Hebrews 1 and elsewhere (cf. my The Christology of Jesus, and my forthcoming work Jesus the Sage and the Pilgrimage of Wisdom, both by Fortress). One may also point to the development in Judaism of thinking about divine agents. The christological confessions of early Jewish Christians were not examples of creatio ex nihilo, nor even creations simply as a response to a resurrection appearance. There were important antecedents and mental resources in early Judaism that the first Christians could draw upon to express their faith. In fact, certain sapiential things Jesus himself said and did to identify himself as God’s Wisdom in the flesh helped encourage these later, post-Easter developments; (2) the resurrection appearances; (3) the reception of the Holy Spirit.

Despite these, and a few other inadequacies, Harris has I think established in admirable fashion his major conclusion that Jesus was confessed as God well before the second century ad. This can be seen in Romans 9:5, but it is surely already implied in the even earlier modification of the Shema in 1 Corinthians 8:6 (cf. now N.T. Wright, The Climax of the Covenant), as well as in the marana tha prayer (1 Cor. 16:22). There is a great wealth of valuable material in this study, which should give anyone pause before they urge that ontological Christology is necessarily late, or is necessarily a development of functional Christology. I commend it to all who want to understand both the basis and the apex of all NT Christologies.