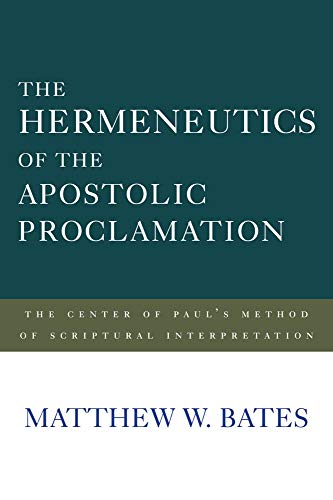 The Hermeneutics of the Apostolic Proclamation: The Center of Paul’s Method of Scriptural Interpretation

That the Old Testament Scriptures play a central role in the development of Paul’s theological discourse is obvious. The logic that undergirds Paul’s specific employment of the OT Scriptures is, however, not nearly as clear. Is there any fundamental coherence between Paul’s theological commitments and his scriptural interpretation? Some of the most recent and influential proposals have answered this question in the affirmative. One thinks, for example, of Richard B. Hays who has suggested that Paul’s scriptural interpretation is indebted to a specific narrative about Israel’s Messiah as well as Francis Watson who, quite differently, has argued that Paul’s scriptural citations must be understood as Paul’s own reading of the Pentateuch as a sequential and antithetical narrative of unconditional promises and conditional stipulations. While Bates applauds recent attempts to find coherence between Paul’s hermeneutics and Paul’s theology, he argues that scholarship has failed to see Paul as a distinctly Christian interpreter of the OT and has, therefore, neglected the way in which early Christian authors such as Justin Martyr, Tertullian, Origen, and others interpret the same OT texts and thereby provide important insights into how Paul interpreted the Scriptures. Likewise, scholars have underplayed Paul’s explicit statements regarding his own method for scriptural interpretation. Bates’ primary argument is that “Paul received, utilized, and extended an apostolic, kerygmatic narrative tradition centered on certain key events in the Christ story as his primary interpretative lens—a narrative tradition that already contained a built-in hermeneutics” (pp. 56–57). This apostolic and kerygmatic narrative is the center of Paul’s thinking and provides the coherence for his employment of Israel’s Scriptures.

In chs. 2–3 Bates argues that Paul’s interpretation of the OT must be situated within Paul’s kerygmatic hermeneutic which is found in “protocreedal” texts such as 1 Cor 15:3–11 and Rom 1:1–6. Paul declares that these statements provide the content of early Christian proclamation and center upon a coherent narrative regarding Christ’s death, resurrection, exaltation to heaven, his apostolic appearances, and his commissioning of the apostles to extend the gospel to all nations. This tradition is explicitly spoken of as in accordance with, or promised by, the OT Scriptures, and therefore, “The result is that Paul himself testifies that his scriptural hermeneutic is grounded in Christocentric protocreedal narrative sequences that can be identified as both kerygmatic and apostolic in nature” (p. 60). The tradition is kerygmatic because it forms the content of early Christian proclamation, and it is apostolic since Paul claims that he and many other Christian missionaries proclaimed the tradition. This apostolic kerygmatic tradition is the center from which Paul generates his innovative reading of the OT. Thus, for Bates it is a mistake to give hermeneutical priority to a certain trope such as allegory or typology given that rhetorical conventions subordinate arrangement and expression to invention. In other words, these tropes “are better viewed not primarily as first-stage generative techniques for Paul, but rather as subsequently chosen verbal vehicles that were carefully selected to achieve a rhetorical style” (pp. 116–117). Bates then examines some Pauline texts, including 1 Cor 10:1–13, 2 Cor 3:12–18, and Gal 4:21–4:31, in order to demonstrate that the apostolic kerygma is the hermeneutical framework that generates Paul’s readings of the OT and that Paul subsequently uses the tropes of typology and allegory to convey his new interpretations of the OT.

In chs. 4–5 Bates seeks to remedy the lack of attention given to situating Paul’s scriptural hermeneutic within early Christian exegesis by demonstrating Paul’s use of “prosopological exegesis,” a technique that was widespread in the early church, and was used to explain “a text by suggesting that the author of the text identified various persons or characters (prosopa) as speakers or addressees in a pre-text, even though it is not clear from the pre-text itself that such persons are in view” (p. 183). Bates marshals numerous sources to show how non-Christian rhetoricians, Philo of Alexandria, and Justin Martyr employed this technique by placing words or speeches in “the mouth of a character in order to evoke an emotive response” (p. 198). Prospological exegesis is employed when the identity of the speaker of the divinely inspired text is not obvious, thereby enabling the interpreter to resolve the tension of the speaker’s identity by assigning the words to an appropriate speaker. Bates suggests that a handful of important Pauline texts should be understood according to this exegetical technique (e.g., Rom 10:6–8; 10:16; 11:9–10; 15:3, 9; 2 Cor 4:13). For example, Bates argues that the difficult verses of Rom 10:6–8 can be understood more precisely when it is recognized that Paul is employing prosopological exegesis. Against the framework of the apostolic kerygma, Paul assigns the words of Deut 9:4 and 30:12–14 to “the Righteousness of Faith” who testifies to Christ’s death, resurrection, and announcement of the gospel. Paul interprets the words of the character “Righteousness of Faith” by his interpretive summaries that construe the speech according to the apostolic kerygma (e.g., “this refers to Christ being brought up from the dead” in 10:6b). Thus, Paul understands the voice of Deuteronomy as speaking “in the character of the future Christ, who then from within this dramatic setting could speak about” the events of Christ (p. 333). Bates provides copious evidence that the church fathers employed the same technique in a way that was also indebted to the apostolic kerygma.

Bates has made a valuable contribution to a topic within NT scholarship that many, I would presume, feel is currently overworked. Bates is well-versed in ancient Hellenistic rhetorical conventions and early Christian exegesis, and this enables him to situate Paul’s scriptural interpretation in its historical and theological context. While I often wanted to see more of the pay-off in terms of overall meaning for reading Paul in light of the technique of prosopological exegesis, this insight does have the potentiality to lead to fresh exegetical observations. Likewise, his insistence upon the apostolic kerygma and the protocreeds as the center that generates Paul’s reading of the OT enables one to find the glue that holds together Paul’s hermeneutics with his theology. While his proposal may not have the simple elegance, clarity, and total explanatory power of some of the more well-known articulations of Paul’s interpretation of Scripture, the contributions just mentioned should give the work lasting significance.