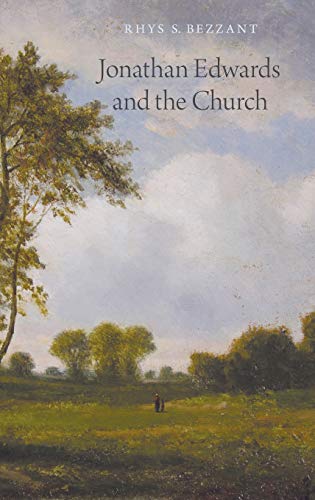 Jonathan Edwards and the Church

With all the recent scholarship devoted to Jonathan Edwards, it is a wonder that there would be any kind of gaping holes in the coverage of his doctrinal content, even taking into account his extensive corpus of writings. To be sure, there are still areas in Edwards studied that need to be covered in greater detail, but it is surprising to think that there has been a genuine neglect of an extensive study of Edwards’s ecclesiology amongst scholars. This, however, is no longer the case due to Rhys Bezzant’s recent work Jonathan Edwards and the Church. The author gives a telling account of Edwards’s ecclesiology that is “orderly but not ordinary” (see Chapter 6).

Bezzant is the Dean of Missional Leadership and Lecturer in Christian Thought at Ridley Melbourne. The author works diachronically through the years of Edwards’s pastoral leadership, supplying an understanding of his ecclesiological development. Alongside of this analysis Bezzant also offers helpful systematic formulations addressing the nature and significance of Edwards’s doctrine of the church. This approach supplies the reader with an exploration of several of Edwards’s major writings and sermons, with an eye to their ecclesiological implications.

In regards to the thesis of this work, Bezzant maintains that for Edwards, “The church is not an afterthought in the otherwise individualistic plans of God, but is the focused domain where God’s promises, presence, and purpose are to be discovered” (p. ix). More specifically, Bezzant claims that Edwards held fast to “fundamental Protestant convictions while creating space for fresh expressions of church life” (p. xi). This renewal in ecclesial life came about through various means, such as revivals, itinerancy, concerts of prayer, missionary initiatives, and doctrinal clarification.

The first chapter sets Edwards in his historical context, noting several key features regarding the New England ecclesiological order. Dating back to the Reformation, debates raged regarding the relationship between the church and state, and within the Puritan context of New England a new concern arose concerning the membership and disciplinary procedures of the church. With the rise of articles establishing New England ecclesiology, such as the Saybrook Platform and the Half-Way Covenant, Edwards sought to bring about an “ecclesiological recalibration.” Bezzant avers, “Not only did Edwards face the challenge of providing for the already-conflicted Puritan church in New England renewed clarity, stability, and unity, but he had to do this in the midst of revivalist fervor and new fissures within the received polity” (p. 11). As seen throughout this work, Edwards always sought to balance and find the good in two diverging strands of ecclesiological thought.

The majority of the book concentrates on tracing Edwards’s ecclesiological development in a chronological fashion, asking at each juncture what his writings contribute to this topic (chapters 2–4). Within each chapter the author focuses on several of Edwards’s major writings or sermons, explicating from each their overall ecclesiological content. As one traces these writings diachronically, one can see that during the period of the revivals (mid 1730s to the early 1740s) Edwards centers his attention on the church as the necessary framework for understanding and channeling spiritual ardor. The latter part of his ministry coalesces around the international and eschatological shape of his ecclesiology (p. 257). After this treatment of Edwards’s works, Bezzant offers a synthetic summary of his ecclesiology, centered on three specific areas: worship, discipline, and polity. It is here the reader sees not only a theological summary of the previous chapters, but also the practical ways in which Edwards’s ecclesiology shaped the actual life of the church. The work concludes with a chapter summarizing how in fact Edwards’s ecclesiology is rooted in Reformed tradition, and yet innovative in developing an evangelical ecclesiology with “revivalist tendencies at its core” (pp. 256–57).

This is an outstanding work on a topic that has not received the attention it rightly deserves. Bezzant is right to highlight the work of Schafer, Sweeney, Plantinga Pauw, and Hall throughout his books, as these writers have contributed to this topic in meaningful ways. The author, however, certainly goes beyond them in this monograph, and at points diverges with their scholarship, suggesting Edwards was a pastor-theologian with a robust evangelical ecclesiology.

One great strength of this work is the way in which Bezzant outlined the New England historical context whilst also focusing so readily on Edwards’s original writings. With this dualistic focus, Bezzant was able to highlight to a great degree the ways in which Edwards’s ecclesiology developed in his own mind, but also in relation to the constraining forces of society and church tradition. As such, the reader experiences theological vigor alongside of a nearly biographical approach that produces a robust depiction of ecclesiology that shaped several generations in America.

Bezzant sheds light on several facets of Edwards’s life and career throughout the work. Perhaps one of the more surprising to the average reader would be his accounting of Edwards’s dismissal from his church in Northampton. Many may argue that Edwards was ejected from his pastorate due to his attempt to reestablish an ossified, authoritarian form of leadership that simply did not comport with his present milieu. Bezzant argues, to the contrary, that the real issue was his biblical understanding of the church and the way in which he sought to see the gospel transform church and society in very specific ways. This is the case, as Edwards’s ecclesiology was shaped by a certain eschatological understanding, which gave rise to a particular view of church life and the pursuit of virtue.

Bezzant’s work is an outstanding example of how one can delve into historical theology, offering up both biographical insights as well as astute theological promulgations. It also demonstrates that ecclesiology should not be thought of as a mere secondary doctrine; rather ecclesiology should be seen as connective tissue, demonstrating how the various loci of theology are intimately linked. Pastors, scholars, and seminary students alike will benefit greatly from this work, one that is truly a contribution to the field of Christian scholarship.