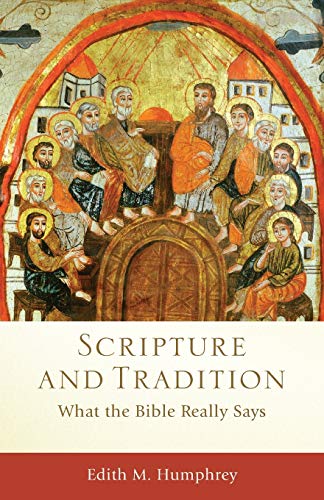 Scripture and Tradition: What the Bible Really Says

The title of Edith Humphrey’s book—which began as lectures given in Acadia Divinity College, Nova Scotia in 2010—is one that beckons the reader. After all, one cannot be engaged in biblical and theological study today and be unaware of the groundswell of interest in “theological exegesis,” the interpretation of Scripture in reliance on expositions provided by revered past “doctors” of the church. Simultaneously, one cannot avoid hearing ongoing lament over idiosyncratic interpretation of the Bible within evangelical Christianity. Thus, the theme of Humphrey’s book is timely.

This Canadian-born professor of New Testament at Pittsburgh Theological Seminary is frank in admitting that the lectures reflect a quest on which she was spurred by her upbringing in the Salvation Army (a movement she still holds in esteem and to which she dedicates this book). Her upbringing left her with unresolved questions about that movement’s connection to the “church of the ages.” Her subsequent sojourn in Anglicanism—beset as it is with theological polarization—left her as perplexed as she had been one stage earlier. Did the Anglican Communion’s theological center of gravity in fact lie in the “faith once for all delivered to the saints?” As she witnessed irresponsible handling of Scripture in that communion, it did not appear to her that this was so. Now received into the Orthodox Church, she believes that she has found a theological footing that will not crumble. Yet, she lectures in a setting no less polarized, theologically, than one which she earlier abandoned; her PCUSA seminary allows that she may teach with an “anchor” in Orthodoxy.

The interesting introduction to Scripture and Tradition decries the lack of theological consensus in the modern Christian world; today’s Christianity appears in many respects “rudderless.” Humphrey in part faults the astonishing decline in biblical literacy in church and society. Further, as chapter I relates, the Scriptures indicate that the church of the apostolic age was concerned for the intact handing-down of the teaching of Jesus and his apostles. But, alleges Humphrey, this emphasis on handing down has been muted by various Protestant Bible translations which have tended to translate παράδοσις as “teaching” rather than as “tradition.” She therefore contends that Protestantism’s quarrels with medieval Catholic tradition have obscured an important principle and at a real cost. Mainline Protestantism’s theological “drift” is the outworking of the forsaking of “holy tradition.”

Yet if a Protestant reader would retort—to such a suggestion—that we honor this tradition supplied by Jesus and his apostles just to the extent that we honor the written Scriptures, Humphrey demurs in chapter II that “we must take care not to overvalue the role of the written Word” (p. 52). She insists that she is not seeking to disparage Scripture, but sees that a “precisionist” approach to the Bible will yield a Pharisaic literalism. She means to contend for the advantages of transmitted oral tradition as supplement to what is written.

But the question remains, have Jesus and his apostles indeed conveyed this to us? She demonstrates in chapter III that there were oral, unrecorded, instructions provided by Paul to the churches indebted to his missionary labors (pp. 85, 86). His written instructions regarding women in the church and regarding the Lord’s Supper assume the existence of these earlier spoken communications. But we are, in acknowledging this, far from being in a position to affirm that we have any actual access to such unwritten instruction today. Humphrey is more enamored with the “idea” of oral tradition as interpersonal exercise than with the actuality of what might have been transmitted.

In chapter IV, she points approvingly to the example of Papias (c. 60–130), who insisted that he preferred the words of the Lord that he had received orally from eyewitnesses over the written memoirs [ἐκ τῶν βιβλίων], which Humphrey interprets as a reference to the increasingly-circulated gospels (p. 113). But the exalting of Papias in this way again begs the question of whether the kind of oral communication which his generation was evidently the last to receive from eyewitnesses, is in any equivalent sense available to us now. After her best efforts, Humphreys has not shown that it is.

Her final chapter is especially notable in that it takes up the issue of discerning which ancient Christian traditions are of divine and which of merely human origin. There is a sensitive discussion for example of the Sabbath principle; she asks whether it is not the case that our change of day is rooted in some oral instruction from Christ and the apostles which was never recorded. There is an equally good discussion of clerical celibacy. The careful reader will observe Humphrey using post-apostolic and Patristic texts to affirm the legitimacy of practices which go beyond those explicitly mandated in the New Testament. However, the theory of theological development on which this method depends is not openly articulated. Are practices and doctrinal emphases from the second century onward necessarily trustworthy? It is not difficult to find examples of an opposite kind.

An admiring writer said of John Henry Newman (1801–1890) that he took with him, into the Church of Rome in 1845, very much of his Anglicanism. He was always, after 1845, some kind of amalgam of his life up to and after the year of his reception by Rome. Edith Humphrey cannot conceal and does not care to conceal her roots in evangelical Protestantism even while she commends the use of theological tradition about which evangelicalism has long been wary. She is not always fair to her past; for example, she asserts that Protestants optimistically believe that the words of Scripture are transparent in their meaning as soon as they are read (p. 72). Yet, this is not the same as to say that she writes with animus. She has, one could say, one foot still planted in the Protestant world, as a professor in a Presbyterian seminary, and one foot in Orthodoxy, where one assumes that she would not be functioning as a theological professor. Scripture and Tradition has this same amalgam-like quality.

It also has idiosyncrasies. All Scripture renderings in the volume are identified as the personal translations of the author. Is this not awkward in a book that urges an expanded role for tradition? Her text still contains many asides, which, while they would have a place in a lecture hall, do not read well. Here is an interesting and a stimulating book on Scripture and tradition. But as to its sub-title, “What the Bible Really Says,” one must insist “case not proven.”