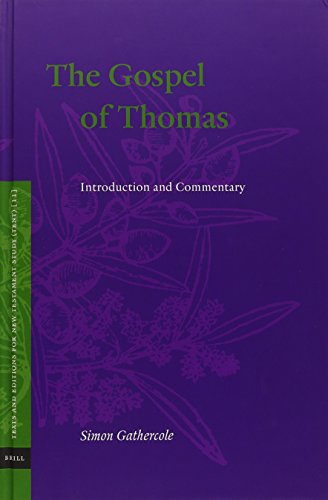 The Gospel of Thomas: Introduction and Commentary

Commentaries can be like recipes: We tend to think that the best one is whichever we encountered first. That’s why, amid the ever-growing list of commentaries on the Gospel of Thomas, some will remain partial to the previous ones written by Ménard, Nordsieck, Plisch, Pokorný, Grosso, DeConick, et al. Now an attractive new commentary has arrived, and it will gain its own adherents. But the truth is that such a plenitude of commentaries can coexist happily because, at the very least, the approaches vary.

In The Gospel of Thomas, Simon Gathercole, Senior Lecturer in NT Studies at the University of Cambridge and one of the newest members of the Committee on Bible Translation behind the NIV Bible, differs from other commentators in his tight focus on “the meaning of the sayings of Thomas in its second-century historical context” (p. ix).

The volume is divided into two sections: Introduction (pp. 1–186) and Commentary (pp. 187–618). The first section sticks to the usual historical turf but divides the topics into 12 chapters. Along the way, Gathercole presents the manuscript evidence of Thomas, which amounts to three Greek fragments, and one Coptic codex. This amount of evidence is fortunate, especially given the fact that it is currently more than the Gospel of Mark, 1 Corinthians, and 1 and 2 Timothy during the same timeframe. When the four Thomas manuscripts are compared, he makes a compelling case that scholars should treat them as witnesses to the same work and not as different recensions.

Gathercole then offers the most extensive list of references to Thomas and the contents of Thomas catalogued to date. He rightly claims that the 48 textual references to Thomas and over two dozen possible allusions to the contents of Thomas in late antiquity and beyond are evidence of the work’s broad footprint of influence, even if some of the references and allusions are not as clear as others. The original language of Thomas was almost certainly Greek, he argues, and written by an unknown author probably in Syria or Egypt sometime between 135–200 CE. He agrees with the scholarly consensus that Thomas is not a particularly well ordered collection or list. Yet he views the structure of Thomas as reasonably unified with a mixed genre. Similarly, he interprets the religious outlook of Thomas as relatively coherent with an inherent adaptability, especially as evinced by its use within many different groups (Gnostics, Manichees, etc.). Thus, it is not “Gnostic” in any conventional sense of the term, nor does it seem to align well with any particular movement. One noteworthy similarity with other second century literature, however, both Christian and non-Christian, is the tendency to see Jesus as a teacher.

Before moving on to the core of his work, the commentary proper, Gathercole sets out to answer a question that has been lurking in the shadows ever since page one: Is Thomas useful in historical Jesus research? His short answer would be no. His more drawn-out response—especially in light of his examination of Thomas’s historical proximity to Jesus via cultural and chronological factors—is that “as scholarship currently stands, and with the primary sources that are available to us at present, the Gospel of Thomas can hardly be regarded as useful in the reconstruction of a historical picture of Jesus” (p. 184).

Against the introduction’s sweeping backdrop, Gathercole centers on the text of Thomas, sticking to the well-established division of 114 sayings. In detailing the advances, setbacks, collaborations, and conflicts surrounding each logion, he provides fascinating insights into their interpretation, especially in light of Thomas’s second-century context. For example, it is not that the author of Thomas necessarily made a mistake when numbering prophetic books (logion 52.1) or referring to a certain medium of exchange (logion 100). Rather, Gathercole utilizes these types of “oddities” to support his larger argument that Thomas provides a unique window into a second-century—not first-century—milieu. He is reasonably optimistic, then, about the possibility in most cases of interpreting the meaning of the logia, especially when viewed according to their second-century context.

Less understandable is Gathercole’s attitude toward memory studies. It would have been good for Gathercole to state his views on the limitations and/or uses of memory studies in historical Jesus research, especially given his strong emphasis that Thomas’s overall picture of Jesus is “historically very implausible” (p. 183).

In addition, Gathercole fails to acknowledge that syntax has contributed in some significant ways, not just in relation to the original language and transmission of Thomas, but also for determining where there may be substantive links in meaning. Take logion 2.1. First, it contains a rare classical Greek construction which cannot derive from an Aramaic origin that shares the same syntax: the aorist third person negated imperative. Second, only Jesus used this unusual syntactical construction in the synoptic gospels. Third, there is another construction in the same logion that only Jesus uses according to the synoptic gospels: ἕως followed by εὕρῃ (Luke 15:4, 8). Yet neither of these syntactical observations or potentially significant NT links was included in Gathercole’s treatment.

The same holds true for other logia, such as 62.2. It is quite possible that certain syntactical constructions did not merely escape modification through memory, oral, or performance channels. Rather, they demonstrate that the author probably consulted one or more Greek manuscripts, most likely the synoptic gospels or some compilation of them. These further considerations would strengthen Gathercole’s view of a Greek original, increase the number of substantive links in meaning to consider, connect in some helpful ways with Gathercole’s summation that all four manuscripts were privately copied, and be consistent with what other papyrological evidence of gospel traditions in the second century suggest. (See especially Scott D. Charlesworth, “The End of Orality: Transmission of Gospel Tradition in the Second and Third Centuries,” in Between Orality and Literacy: Communication and Adaptation in Antiquity, Volume 10, ed. Ruth Scodel, Mnemosyne Supplements 367 [Leiden: Brill, 2014]: 331–55.)

At the end of the day, writers write to be heard, and the author of Thomas is no different. Gathercole rightly wants to move the meaning of the text in its second century context from the outer margins of discussions of Thomas to the heart of the discussions about it. There is no doubt that Thomas is a fascinating artifact from the second century and has important implications regarding second-century debates about Jesus, the nature of Christianity, and the transmission of gospel tradition.

For the reader who is in the habit of underlining, be prepared to have a second pen on hand, as your ink will run dry by mid-volume. The sheer lucidity and precision of Gathercole’s writing leads readers to see, confront, and challenge the presuppositions of their own studies regarding Thomas and its second-century context. This is a reliable, insightful and admirably evenhanded examination of Thomas. Every theological library should own this path-breaking book.