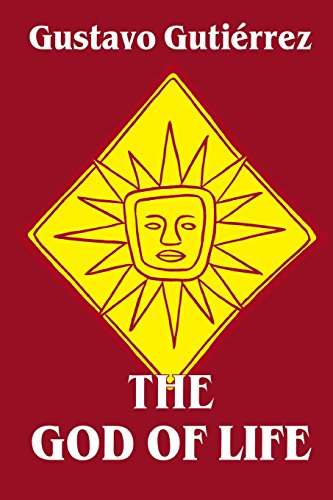 The God of Life

This is Gutierrez’ most comprehensive spirituality of liberation to date, and confirms his growing concern for reflective engagement with suffering that is free of political theorizing or Marxist rhetoric. He integrates commitment to justice with faith in God’s love, in the context of contemplation, worship, and reflection on the Scriptures in what the cover describes as a simple Bible study.

The book has a systematic structure, broadly Trinitarian in outline. In Part I God’s love (as both Father and Mother) is shown to be revealed in his justice, holiness, faithfulness, grace, and life for those who struggle in the face of death. Part II opens up the theme of God’s presence in the kingdom which Jesus proclaimed. Part III answers the question, ‘How are we to speak of God in the context of poverty?’ by using a general framework of the inspiration of the Spirit of prophecy. The theme of the book is ‘life’, which implies the rejection of death and all oppression which leads to it. Liberation brings life, and God is the God of liberation and life, acting in history to set the poor free. At the same time he demands the risk of our faith-commitment to those on the margins of history, for whom he has shown his preferential love. The God of life contradicts death in the resurrection, and calls us to choose life and to do justice. Gutierrez’ dislike for metaphysics is as committed as ever: talk about God always presupposes action.

‘Life’ is described as ‘life in all its fulness’ in freedom and communion with God, not otherworldly of course, but immersed in the historical process in which the church prolongs the liberating action of God. This avoids individualism since it reincorporates people into social relationships in covenant together with God. The church thus acquires its integrity as a sign of the kingdom as it defends the poor, who are the privileged members of the kingdom.

The themes are familiar, and so are the theological tendencies which make it difficult for me to travel all the way with Gutierrez. There is the tendency to reduce salvation to justice; the emphasis on sin as a manifestation of injustice rather than an inner, moral problem; the special presence of God in the poor; history as revelation; following Jesus as the basis of Christology, and other characteristic themes of liberation theology. Catholic themes are there also: deeds as the way to holiness; the universalism of grace; Mary as the perfect Christian (Rahner); the church as sacrament; and conversion as a transformation of a faith already present.

But Gutierrez does attempt to balance the immanence of God with his transcendence. There is a real recognition of the sovereignty of God, although he works essentially with a dialectic between God present and absent, revealed and hidden, gracious and demanding. Grace is not opposed to the quest for justice but gives it meaning when God is understood in history as well as ‘wholly other’.

Bible passages are quoted and expounded some 500 times. But does this go beyond seeing Scripture as the inspiration for the liberative project to a more profound acceptance of its final authority? I fear that Gutierrez sometimes reads into his texts, and often reads too much out of them. We are still in the business of ‘theological reflection nourished by the Word of God’, which is Gutierrez’ model for the ‘rereading’ of Scripture. His desire is to let Scripture speak, allowing it to read us as we read it. But the enterprise is more of a dialogue with Scripture, using a ‘pre-text’ which always tends to make the exercise selective and reductionist.

On the other hand, the context and commitment brought to the text often illuminate new and challenging layers of meaning. We surely need to allow these texts to challenge us to a faith which truly engages with suffering and responds to the cry of the poor. Gutierrez is right to call us to the demands of discipleship in the kingdom as at the same time we accept its grace as a gift. He has a pastor’s heart and a deep love for his suffering people which obliges us to listen. He has a way of expressing profound reflections in simple, ‘prophetic’ style, which I find very readable.