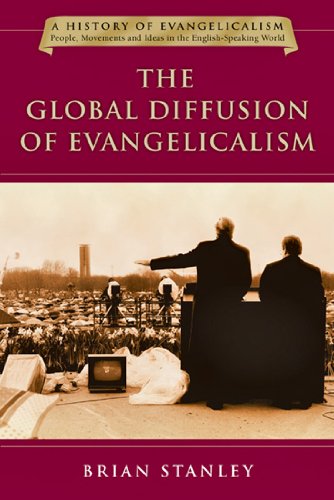 Brian Stanley’s Global Diffusion of Evangelicalism offers the assessment that “Evangelical expressions of Christianity were by 2000 far more prominent within the world Christian movement than they had been in 1945” (p. 235). This claim will not surprise readers of Themelios. It has been reported for some time that evangelical Christianity is globally on the ascent. Yet we will have two main questions regarding Stanley’s assessment: first, what (and who) were the primary means by which this global ascendancy advanced and second, what does this global “reach” of evangelicalism mean for the future direction of this expression of Christianity? Stanley, professor of World Christianity in Edinburgh University, is an author we have learned to respect on the basis of his earlier writings such as The World Missionary Conference: Edinburgh 1910 (Grand Rapids: Eerdmans, 2009).

Recently, Mark Noll has argued that for more than a century American evangelical Christianity has been leaving its own imprint on emerging forms of world Christianity (The New Shape of World Christianity [Downers Grove: IVP, 2009]). Stanley, while affirming this North American role in the expansion of evangelicalism, shows how simultaneously extensive British evangelicalism’s influence was in this same expansion. Having done so, he demonstrates how in recent decades evangelical influences—instead of flowing from Western Europe and North America to the rest of the globe (as formerly)—have come to flow from “everywhere to everywhere.”

Stanley’s focus is upon the post-WWII world; he allows that for both Britain and America, the pre-war decades had been times of “sifting” for evangelical communities. Great strides had been made in making Christianity a global faith in the pre-1914 period. Yet the inter-war period was an era in which western Christianity was unsettled both at home and overseas by the advance of theological liberalism. The shaking of confidence in the Scriptures, the advancing of the idea that Christianity could now, at best, enter into dialogue with the great religions of the world, and pro-independence agitation in the colonies combined to undermine the certainty which had undergirded earlier missionary effort. Thus, the end of war in 1945 found the missionary efforts of the historic denominations needing a new justification: they now opted instead for strategies of “development.”

And yet, on both sides of the Atlantic, the 1940s marked a period of renewed evangelical energy. The story of the American resurgence heralded by the founding of the National Association of Evangelicals (1943) has often been highlighted because it provided a springboard for the launch of post-war international initiatives including Youth for Christ, Campus Crusade, the Greater Europe Mission and broadcast ministries such as Trans-World Radio. In the same decade, as Stanley shows, the British discipleship ministry, Scripture Union, began to devolve leadership of its international ministries into the hands of Christian nationals. SU took these steps foreseeing that the political independence of Britain’s former colonies would require this. During this same era, the British Inter-Varsity movement had replicated itself in North America and the Antipodes. In the post-war period it replicated itself in the developing world under the umbrella of the International Fellowship of Evangelical Students (1947).

To all this was added in the postwar years the international ministry of evangelist Billy Graham. His ministry on five continents—while not the primary factor in the rapid proliferation of global evangelicalism in the post-war period—was symptomatic of and an accelerating force in it. Global evangelical networks emerged not only through Graham’s crusades, but also through his organization’s financial support for the launch of the World Evangelical Fellowship (1951) and eventual congresses on evangelism at Berlin (1966) and Lausanne (1974). These shadowed the existence of the doctrinally comprehensive World Council of Churches (founded 1948). In sum, deliberate strategies and initiatives pursued in the three decades after WWII helped to bring the global evangelical movement to the current ascendancy.

Yet Stanley’s treatment encompasses a second broad issue: the “what,” i.e., what is to be the future posture of this global evangelicalism? Stanley contends that transatlantic evangelicalism’s existence presupposed the existence of older, less vital forms of Christianity; it has also stood in reaction to the anti-supernatural tendencies unleashed by the Enlightenment era. By contrast, the evangelicalism of the majority world has not generally stood apart from long-existing, less vital forms of Christianity; it has not either stood in reaction to the Enlightenment’s corrosive effects. As he puts it in closing this work, “The battle for the integrity of the gospel in the opening years of the twenty-first century is being fought not primarily in the lecture rooms of . . . seminaries, but in the shanty towns, urban slums and villages of Africa, Asia and Latin America” (p. 247).

To these differences of historical context, Stanley properly adds the challenges currently facing Western evangelicalism in Britain and North America: the expanded role of hermeneutics, ferment over gender and sexual ethics, and the emergence of “post-conservative” evangelicalism. As for the “majority world,” various expressions of Pentecostalism and articulations of the gospel’s relation to social justice have played an ever-larger role. Strong differences of opinion, having come to the surface as long ago as the Lausanne Congress of 1974, were still alive and well when the World Evangelical Fellowship convened its large-scale congress at Cape Town (2010).

For such reasons, the old transatlantic evangelicalism cannot permanently stand “at the helm” of things, for networks of evangelical influence now extend from “everywhere to everywhere.” Stanley demonstrates this by pointing to the influence upon the global mission agency, Operation Mobilization, of themes from the 1930s East African Revival. This reviewer, while pondering Stanley’s description of this trend, received a missionary newsletter reporting that Christian literature for West Africa is now being printed in India. Old conceptions of unidirectional missionary influence are now past their “sell-by” date.

Today’s global evangelicalism is thus a bigger and more diverse family than almost any of us can fairly describe. Within the editorial limits imposed on Stanley, he has masterfully surveyed this movement. Some readers will be forced to reflect on the question of whether the boundaries of today’s evangelical world are exactly as Stanley has drawn them. Yet here is a “must-read” for denominational leaders, mission directors, theological educators, and pastors.