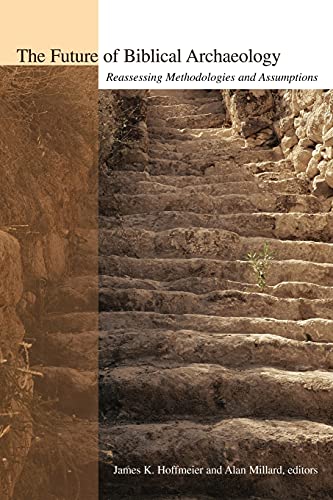 THE FUTURE OF BIBLICAL ARCHAEOLOGY: REASSESSING METHODOLOGIES AND ASSUMPTIONS

The relatively small physical size of The Future of Biblical Archaeology; Reassessing Methodologies and Assumptions and its paperback form is deceptive. In reality, the book contains as much material as some other books twice the apparent size. The book is a conference publication, a collection of nineteen papers presented at the Trinity International University in 2001. The papers have been divided into four categories: ‘Biblical Archaeology: The Recent Debate and Future Prospects’. ‘Archaeology: Approaches and Application’, ‘Using Tests in Biblical Archaeology’, and ‘Hermeneutics and Theology’. These categories are somewhat loose and many of the individual essays under them could be categorized slightly differently. Zevit discusses the history of biblical archaeology in America and the convolutions relating to the term biblical archaeology. T. Davis and D. Merling’s essays discuss about the relationship of archaeology and textual evidence. R. Younker describes the way Andrews University has approached the archaeological enterprise and lessons from it. Hoffmeier speaks about North Sinai excavations. Yamauchi descibes the advances of Homeric scholarship and archaeology and their implications, and Scolnic talks about the identification of Migdol. Ortiz presents evidence against the new low chronology. Millard discusses examples of invaders who have not left a trace in the archaeological record. Hallo shows parallels from Sumer, Hoffner from Anatolia, Fleming from Syria, and Hess from Emar. Younger speaks about the identification of the gods of the Samaritans (2 Kgs 17) in relation to evidence from surrounding areas outside Israel. C. Miller discusses about reconstructing ancient languages. Monson describes the history of taking the ancient context into account in biblical interpretation. Averbeck considers the cosmic battle with Rahab and Leviathan in its ancient context. Weisberg sketches about the relation of ANE texts with the study of the Bible. Vaughn sketches a way of how a history of Israel could be written today, in interaction with some of Brueggemann’s work.

As a whole, the essays are of high quality and intended mainly for an academic audience. There is some superb material here of which even a number of biblical scholars may not be aware, and only a few articles which seem of lesser quality. The evidence presented is, as is usual for the ‘maximalists’, mostly indirect, simply indicating plausibilities rather than certainties. However, some essays present direct evidence, such as the one by Ortiz who argues against Finkelstein’s low chronology, and the one by Younger which presents direct parallels in order to try to determine the gods of the Samaritans.

As a whole, the book addresses issues which biblical scholars need to know about. While some may argue for seeing ancient Israel in isolation from its surroundings, this book gives a glimpse of the overwhelming evidence for a common background to the ancient world and to the Hebrew scriptures. As the book argues, biblical archaeology at its best takes into account texts and artefacts both from ancient Israel and its surroundings which can illuminate the Hebrew Bible. While it is likely that it very much depends on the reader to which aspects he or she pays attention in this collection of essays, for this reviewer, one issue to note is that there is a lot of material presented in the book which relates to the second millennium bc, and such material simply shows (reiterates!) how life was just as sophisticated in the second millennium as it was in the first in the ancient Near East. From this angle, when life went on as usual in sophisticated organised societies during the second and first millennia bc, surely there was not a void in Israel in the meantime?