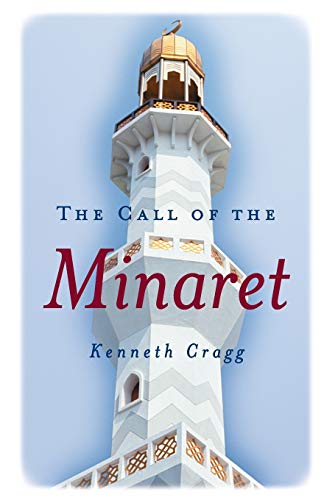 The Call of the Minaret

I am very grateful for this revised, enlarged edition of Bishop Cragg’s book first published in 1956. He concludes both editions with words which will speak to every generation: ‘We who, in our generation, listen to the call of the minaret may hear it most compellingly from the muezzin over Gethsemane. There we shall best understand wherewith we must answer—and how, and why’ (p. 326). It is not surprising, therefore, that Cragg, after describing Islam at the beginning of its new century (1979) in change and continuity and having presented a sympathetic and thought-provoking account of Muslim beliefs and practices, discusses that how and why. He notes that ‘renewed and effective politicization of Islam is the most important single fact of the new century’ (p. 8). However, he does not ignore the folk Islam of the ordinary, often illiterate, people with their prayerful visits to the tombs of saints. He describes as a double insurance the blessing of the holy man corroborating the skills of the technician (pp. 23 and 23).

In Part II of his book Cragg asks what the minaret says to the Muslim. He maintains that both Muslims and Christians believe in one supreme, sovereign Creator-God but describe him differently (p. 30). ‘Revelation is conceived of, not as a communication of the divine Being, but only of the divine will. It is a revelation, that is, of law, not of personality’ (p. 41). The Qur’an gives men enough knowledge to relate to God as servants but not as sons. Historically, Islam begins with the Hijrah in ad 622 when Muhammad and his followers emigrated from Mecca to Medina. At that point Muhammad decided that prophethood must be successful. ‘The Muhammadan decision here is formative of all else in Islam. It was a decision for community, for resistance, for external victory, for pacification and rule. The decision for the Cross—no less conscious, no less formative, no less inclusive—was the contrary decision’ (p. 85). In chapters 4 and 5 Cragg discusses Prayer and Religious Life in Islam and the Islamic Order for Human Society.

Part III discusses what the minaret says to the Christian. It is firstly a call to understanding. The writer describes the place of the Qur’an in Islam—its chanting, its calligraphy, its centrality. In the call to participation (ch. 8) Cragg notes that many of the old forms of Christian action have been taken over by the Muslim state or rejected. His remarks on ‘tentmaking’ are pertinent: ‘It is important that there be no subterfuge in Christian relationship. The ‘tents’, whatever skills they entail, must be real’ (p. 202). He observes that much has changed in the last 30 years with regard to the possibilities for participation. In some parts, especially in Africa, the doors are wide open for doctors and teachers prepared for long-term commitment, but where this is not so, intelligent and sensitive Christian ministry is needed through presence and identification (p. 217).

Writing on the call to retrieval, Cragg pithily sums up the situation. ‘The Muslim sees Islam as correcting Christian “distortion” of Jesus and of God. Christians see Islam as disqualifying the heart of their understanding of both’ (p. 219). He says: ‘Let it be clear that the retrieval is not territorial. Christianity is not a territorial expression. The retrieval is spiritual. It aims not to have the map more Christian but Christ more widely known’ (p. 230). About the Qur’anic picture of Jesus, Cragg notes that the vetoes are worse than the silences (p. 234). Chapter 10 deals with the call to interpretation especially of the Bible, the Person of Jesus, the Cross, the Christian doctrine of God and the Church and a Christian Society. Cragg calls for new understanding: ‘As for the sacraments themselves, how little they have been interpreted to Muslims! Islam, in its own way, is sacramental. Washing before prayer, posture in prayer, the qiblah toward Mecca, pilgrimage, and Ramadan—all these and much more are examples of material expression and spiritual meaning’ (p. 299).

The last chapter deals with the call to hope and faith. Cragg’s final message is much needed today when the church sometimes falters in its mission to Islam or turns elsewhere where there are more responsive groups of people: ‘It should be plain to all in either faith-community that Christian mission is not a calculus of success, but an obligation in love. Statistics do not make it, nor can they unmake it’ (p. 305). Cragg does not see baptism as ‘extractionism’—extracting someone from their culture and community. He states: ‘Baptism, bringing persons within the Church, means their incorporation by faith into the supranational fellowship of Christ. It does not, properly understood, deculturalize new believers; it enchurches them … New Christians become responsible to Christ for their old setting and to their old setting in the new truth’ (p. 306). Later he comments: ‘The problem is not whether baptism should be withheld, but whether it should be encouraged or invariably sought on our part’ (p. 317). ‘Let it be clear that no sincere seeker will be hidden and unknown’ (p. 318). Cragg has often been quoted on the subject of religious freedom: ‘The Muslim concept of toleration has been, from the beginning, that of freedom to remain what you were born or freedom to become a Muslim. It has never yet meant freedom of movement of conscience, or freedom to become …’ (p. 306). ‘It is assumed that Islam is a faith that no Muslim would ever conceivably wish to question. Consequently the option to do so is neither valid nor feasible … that which one is not free to leave becomes a prison, if one wishes to do so’ (p. 307). He also points out that full freedom would involve alternative procedures in matters of personal status laws which otherwise can have a stranglehold on their members (p. 310). Another incisive comment is found on p. 321 to the effect that Christianity in the eastern mind is primarily represented by the ancient churches and so a sympathetic knowledge of them is indispensable to the western Christian.

Cragg is not easy reading but his works are infinitely worthwhile. One needs to read slowly, reflectively, realizing that here is a writer who has immersed himself in his subject and who towards the end of life has preserved and deepened that compassion which first bade him make known to Muslims the Christ in whom God reconciled the world unto himself. Cragg is philosopher, theologian and evangelist and his book will never really be out of date.