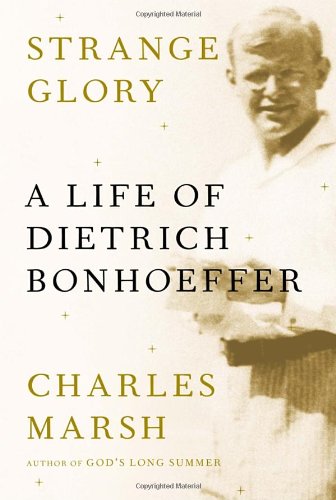 Strange Glory is surely one of the biographical events of the year for Christians. Its shimmering prose and deft depictions of Bonhoeffer’s theological and personal developments are as riveting as they are bold. The book is nearly always a page-turner; however, certain elements mar its virtues.

Marsh follows Bonhoeffer through his precocious upbringing among the Berlin intelligentsia, focusing on the bright lights all around in family and classmates. Already at age thirteen Bonhoeffer revealed his decision to become a theologian, which met with approval from his mother and derision from his older brothers, who remarked, “one can hardly imagine . . . a more paltry institution” than the church. Unmoved, Bonhoeffer replied, “In that case, I shall reform it!” (p. 17).

The volume is peppered with scenes like that one, which bring the reader delightfully close to Bonhoeffer’s life. Bonhoeffer’s trip to northern Africa with his brother Karl-Friedrich, for example, in the middle of his semester in Rome, elicits a fascinating depiction of his encounters with Islam. But Marsh truly shines whenever he reports on Bonhoeffer’s theological developments. These reflections alone are almost worth the price of the book.

Marsh offers new lenses for Bonhoeffer’s year at Union Seminary in New York. Whereas other biographies have focused on his discovery of African-American spirituality and the love he developed for the Sermon on the Mount, Marsh insists that it was Bonhoeffer’s encounter with concrete social ethics, especially through Reinhold Niebuhr, that effected his “signal transformation in the course of that year” (p. 125). Thus the American journey was, for Bonhoeffer, less an inward spiritual awakening and more a growing awareness of the social problems around him.

Bonhoeffer returned to Germany to study briefly under his most formative theological influence, Karl Barth. Marsh describes the mingling of Barthian theology and Niebuhrian “Christian realism” as an entirely new event in the young Bonhoeffer, one for which Barth was quite unprepared. While Bonhoeffer’s view of grace had been “too transcendent” for Niebuhr, it was not nearly transcendent enough for Barth, whom Bonhoeffer deemed “impervious to the ethical and social dimensions of doctrine” (p. 139). Yet Bonhoeffer continued to grip these two poles of thought and action firmly as he returned to Berlin to teach, and to electrify the ears and minds of his sleepy liberal students.

At this point, Strange Glory begins to present Bonhoeffer much like other biographers—except in one area. Marsh gives an entirely new interpretation of Bonhoeffer’s relationship with Eberhard Bethge, the student who became his best friend (and later biographer). This is sure to become the defining feature of this book. As Marsh describes it, Bonhoeffer fell completely in love with Bethge as he took the young man under his wing at his Confessing Church seminary in Finkenwalde. Whatever the merits of Marsh’s interpretation may be, he introduces the hypothesis in a remarkably surreptitious manner. Marsh never argues the case that Bonhoeffer had homosexual feelings toward Bethge, making his case instead by insinuation. In light of the novelty of this interpretation, the special pleading is intellectually reprehensible. After portraying their first meeting with the flourishes of a love-at-first-sight romance, Marsh remarks that other students wondered “whether Bonhoeffer had fallen in love with the boyish country pastor” (p. 236). He then briefly catalogues the extent to which the two men came to share their lives together over the next eight years, and remarks that Dietrich’s family “kept any reservations they had about the duo to themselves, and soon welcomed ‘Herr Bethge’ into the family circle” (p. 237). The arguments from silence found here, together with suggestive quotation marks around “Herr Bethge,” are the hallmarks of the next eighty pages of the book. Marsh extracts expressions of affection and appreciation from Bonhoeffer’s letters, and plasters them together to form an impression of Bonhoeffer as a manipulative lover.

It would be easy to simply regard the treatment of Bonhoeffer’s sexuality in this biography as evidence that our age insists that all ages must be equally sex-obsessed. Even if there is truth to this claim, it leaves an unnerving strain in Marsh’s portrait unexamined. By Marsh’s lights, Bonhoeffer is not only a homosexual; he is also an immature twit, which Marsh takes pains to demonstrate throughout the book. For example, Marsh describes a postcard Dietrich sent to his parents during an internship in Spain, wherein Bonhoeffer’s face was transposed on the body a bullfighter in action. On the back Bonhoeffer wrote, “Greetings from the Matador.” It’s a funny, playful postcard from a twenty-two year abroad, but Marsh describes it as “typical of the unchecked braggadocio of [Bonhoeffer’s] reports to Grunewald” (p. 74). Thus, an amusing gesture from Bonhoeffer is scolded by his biographer, and its humor becomes grotesque.

Throughout the biography, in fact, we are given only muted glimpses of the magnetism, liveliness, and wit that were remembered by many who knew Bonhoeffer. Marsh’s prose, dynamic and glistening to be sure, seems not to be that of an understanding poet. In spite of its many virtues, I would not recommend Strange Glory as an introduction to Bonhoeffer, because it would not make anyone want to know much more about the man. It is an important book for those who are interested in Bonhoeffer’s reception and summaries of his theology, but one hopes its influence will not linger long.