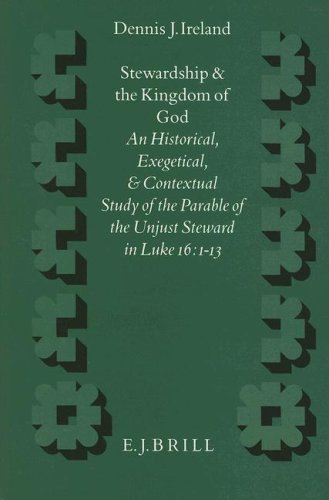 Stewardship and the Kingdom of God: An Historical, Exegetical and Contextual Study of the Parable of the Unjust Steward in Luke 16:1–13

When I wrote my PhD thesis on the Lucan parables, I expected to see, and indeed found, a vast bibliography on such beloved parables as the Prodigal Son and the Good Samaritan. I was unprepared, however, for the equally voluminous literature on the Unjust Steward. As my study progressed, however, the surprise quickly wore off. Though much less well known, this parable probably contains more exegetical and theological perplexities than any other. At that time the only book-length history of interpretation on which I could draw was in German (by M. Krämer); future generations of students will be greatly indebted to Ireland for making a comparable work accessible to English readers.

The revision of a PhD dissertation at Westminster Seminary in Philadelphia, this book contains four major sections. First, Ireland surveys the last two centuries of study of this parable. He divides interpretations into those which see the steward’s action of reducing the various debts as dishonest and those which see it as honest. Under the former heading appear ‘monetary’ and ‘non-monetary’ views. The first of these is best illustrated by the ‘traditional’ interpretation which finds the steward commended for his prudence or shrewdness in the use of material possessions but for nothing else. The second most commonly develops the lesson of resolute action in the face of crisis. A notable variation of the ‘non-monetary’ approach is the ‘negative example’ perspective, which sees the apparent commendation of the steward as in fact irony, sarcasm, a rhetorical question, or the result of textual confusion. Finally, Ireland reviews the common, recent perspective in which the servant’s action is seen as just, perhaps eliminating his typical ‘cut’ in these deals, so as to try to atone for his past mismanagement.

The second section presents a detailed exegesis of the parable section by section. After noting that the basic story-line of the narrative (vv. 1b–7) is relatively uncontroversial, Ireland turns to spend more time on the framing material. The audience identification in v. 1a is shown to be appropriate. ‘The lord’ (ho kyrios) of v. 8 refers to the master in the parable, not to Jesus. The commendation in v. 8a refers to the steward’s shrewdness and does not affirm his honesty. Vv. 8b–9 are authentic in this context. V. 8b offers an ironic but often true observation about the comparative prudence of disciples and unbelievers and forms a natural bridge to the positive application of v. 9. This latter verse, in turn, confirms the monetary interpretation: Jesus is encouraging his disciples to give alms to the poor. If the third person plural reference ‘they will receive you’ is not merely an idiomatic allusion to God, then it refers to poor Christians who will greet their benefactors in heaven. Vv. 10–13 may or may not be original in this context but they fit well and are almost certainly authentic. Vv. 10–12 provide three parallel ways of contrasting earthly and heavenly riches. V. 13 provides a final generalization on the mutual exclusivity of one’s two potential masters in this world. Together, vv. 10–13 enforce vv. 1–9 by warning of the consequences of neglecting those in need.

Part Three turns to the literary context of this parable, moving increasingly outward from the immediate context. First, 15:1–32 and 16:14–31 are discussed. Ch. 15 explains how the Pharisees can reappear in 16:14–15 and demonstrates that 16:1–13 presents no arbitrary lesson. Disciples must guard against imitating the bad example of the Pharisees. 16:19–31 clearly furthers the theme of stewardship. 16:16–18 are admittedly difficult but probably link 14–15 with 19–31 by explaining that the Pharisees have also erred in not recognizing the new era in salvation history Jesus brought and that this new era is nevertheless not antinomian. Ireland then surveys the broader context of Luke’s central section (Lk. 9:51–18:34). He does not find any of the major suggestions for outlining this section as entirely convincing, but opts for a ‘didactic-paraenetic’ approach which sees key themes repeatedly addressed. This enables the interpreter of the Unjust Steward to utilize other key texts such as Lk. 12:13–34, 18:18–30, and especially 14:25–35, to help make sense of the parable. In so doing, further corroboration emerges for the view that Luke is commending charity for the poor.

Finally, Ireland considers the still larger theological context of Luke-Acts as a whole, under two heads: (1) riches and poverty; (2) eschatology. Luke’s negative statements about material possessions warn against greed and self-indulgence; his positive statements enjoin good use of money in the service of love. An inaugurated understanding of Lucan eschatology makes ethics a natural outgrowth as the ‘anticipatory realization’ of the values of the kingdom’s coming fullness. The crisis of our parable, in turn, most likely reflects the coming eschaton—salvation for God’s people and judgment for those who have demonstrated through their wrong use of wealth that they are not disciples.

Ireland’s book is impressively argued and documented. His thorough defence of the ‘traditional interpretation’, which has fallen on hard ground in recent years in favour of views which try to see the steward as making amends in lowering the creditors’ bills, is highly convincing. One could, of course, offer a few quibbles. It is not clear why K.E. Bailey is not grouped with the ‘honest action’ view, inasmuch as he is one of its major proponents (he is mentioned rather under ‘eschatological non-monetary’). More attention to broader hermeneutical debates regarding parable interpretation could have alerted Ireland to views which would not require him to choose between the disciples and the Pharisees as the primary audience (particularly if parables can make more than one main point). His categories of views on the outline of Luke’s central section seem to mix apples and oranges: it is not obvious how ‘theological’ and ‘practical’ interpretations necessarily affect structure in the way in which ‘chronological’ and ‘literary’ interpretations do. A chiastic, literary structure, for example, could easily fit in with the didactic purpose he discerns. As with many conservative Western writers, Ireland seems to pass too glibly over the hard Lucan sayings on the renunciation of wealth and probably overestimates the degree to which Luke’s community was actually rich! And for a survey of studies which purports to be up-to-date as far as 1989, there are some surprising omissions of recent works on this parable (e.g. the journal articles of Austin, Molina, Merkelbach, Steinhauser and B.B. Scott, or the major monograph of Schramm and Löwenstein). But these criticisms are minor. Numerous essays have continued to appear since 1989; several have re-argued the negative example views with barely a passing glance to the traditional interpretation (e.g. Porter, Parrot, du Plessis). This approach is surely unwarranted even without Ireland’s study, but with it no future writer dare ignore its perspective, however unfashionable ‘traditional’ interpretations are in certain circles.