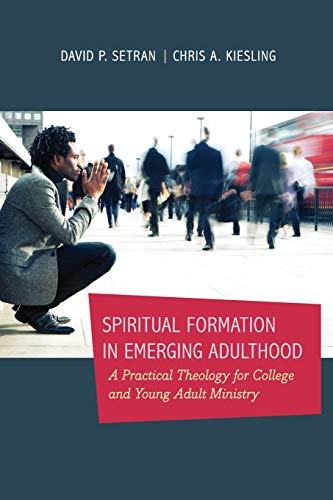 The topic of emerging adulthood has received increased attention from sociologists and psychologists in recent years. Jeffrey Arnett, in his 2004 work Emerging Adulthood: The Winding Road from the Late Teens through the Twenties (Oxford: Oxford University Press), identifies emerging adults as those between the ages of 18 and 29 who have not yet become fully independent; as a result they delay marriage, having children, starting careers, and more. This changing demographic has resulted in increased attention from Christian researchers and scholars, as this age group possesses particular spiritual needs that the church has not yet dealt with in significant fashion. Sensing the need to explore the spiritual lives of emerging adults and to craft corollary ministry practices that meet those needs, David Setran and Chris Kiesling have authored Spiritual Formation in Emerging Adulthood, in which they hope to provide guidance for “Christian thinking about emerging adulthood and for walking alongside emerging adults in their faith journeys” (p. 10).

Drawing on the work of Christian Smith (particularly Souls in Transition: The Religious and Spiritual Lives of Emerging Adults [Oxford: Oxford University Press, 2009]), Setran and Kiesling begin their work by describing the lackluster spiritual engagement of emerging adults, particularly in the area of ecclesial participation. While attributing the spiritual malaise of emerging adults to a blend of developmental and cultural influences, the authors use Smith’s concept of Moralistic Therapeutic Deism (MTD) as a means of understanding emerging adults’ spiritual lives. Seeking to counter the pervasiveness of MTD and its corollary effects, the authors seek to move beyond moralism, beyond therapy, and beyond deism in order to craft a robust practical theology for ministering to emerging adults. This paradigm of stretching beyond moralism, therapy, and deism lays the critical foundation for understanding the rest of Setran and Kiesling’s work.

Exploring the notion of vocation in theological perspective, Setran and Kiesling conclude that the notion of emerging adults’ purpose within God’s providence “become two central domains” for countering cultural ideas of vocational selection (p. 136). Their chapters on morality and sexuality are complementary; the rampant sexualization of Western culture and the so-called “hook-up” culture pervasive among emerging adults can be attributed to the privatization of morality. The final chapter on mentoring emerging adults engages the work of spiritual theologian Adrian Van Kaam and envisions an inter-generational ecclesial culture where seasoned believers mentor emerging adults through this season of their lives.

Spiritual Formation in Emerging Adulthood stands out among similar works on ministering with emerging adults in that it puts emerging adulthood into conversation with theological wisdom and insight. While Setran and Kiesling draw from recent scholarship in developmental psychology, educational theory, sociology, American religious history, and philosophy, they find frequent conversation partners in C. S. Lewis, Dietrich Bonhoeffer, Karl Barth, James K. A. Smith, and Dallas Willard. In this way, the authors demonstrate their theological fluency and prowess as practical theologians concerned with bringing theological realities to bear on cultural and ecclesial realities. In addition, their conclusions on how to best minister to emerging adults are grounded in their work as former campus ministers, observers and researchers of emerging adult culture, and scholars in the areas of Christian education and formation.

While this book is a useful contribution into the ever-expanding literature on the spirituality of emerging adults, a few concerns do exist. The authors could have put forth a more workable model for ministry with emerging adults. Their theoretical groundwork and ecclesiological vision are refreshing and compelling; however, a practical model would be of more immediate use to those in ministry contexts already. In addition, the book does not address the influence of media on the American life course. The proliferation of social media, the ease of access to entertainment sources such as Netflix, and the culture of image-consciousness have all affected emerging adults in significant ways. A chapter examining these cultural phenomena would have been welcome.

Overall, Spiritual Formation in Emerging Adulthood is an important book for college pastors and those ministering to and with young adults. The book will significantly impact those studying the phenomenon of emerging adulthood, and will certainly become a staple text in coursework on campus ministry, young adult ministry, and even Christian cultural engagement. It will also be of use to Christian college and seminary professors interested in understanding the unique developmental and cultural space their students inhabit.