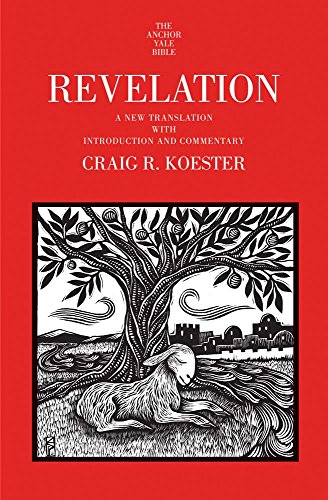 Revelation: A New Translation with Introduction and Commentary

This is the most important commentary on Revelation published in English in more than a decade. It is meticulously researched and elegantly written, masterfully situates the Apocalypse in its Greco-Roman and Jewish-Christian context in the late first century, and demonstrates unsurpassed grasp of the history of interpretation of this important and enigmatic book. Craig Koester is Professor and Asher O. and Carrie Nasby Chair of New Testament at Luther Seminary. His previous publications include the Anchor Bible commentary on Hebrews (New York: Doubleday, 2001), Revelation and the End of All Things (Grand Rapids: Eerdmans, 2001), and several noteworthy books on the Gospel of John. Koester’s fine commentary replaces the weak earlier volume by J. Massyngberde Ford in the distinguished Anchor Bible series, and it belongs on the shelf of every pastor, student, and scholar studying Revelation.

Interpreters are often labeled futurist, idealist, historicist, or preterist, but Koester considers such categories problematic and unhelpful. Instead, he prefers to “identify the social, political, and theological factors” that shape interpreters’ views (p. xiii). Koester reads Revelation “as a forward-moving spiral in which scenes of conflict lead to celebration in heaven over and over again, until ‘all is done’ in New Jerusalem” (p. xiv). He relates the book to the various social, political, economic, and religious settings of Christianity in Asia Minor in the late first century. Koester’s own approach might be classified as preterist-idealist, but he engages widely and fairly with a broad range of ancient and modern interpreters. Unsurprisingly, the most frequently cited modern author is David Aune, followed by Heinz Giesen, G. K. Beale, Richard Bauckham, Grant Osborne, Stephen Smalley, Frederick Murphy, Robert Mounce, and Adela Yarbro Collins.

The commentary opens with the author’s own fresh translation of the Apocalypse (pp. 3–25), followed by a thorough yet accessible introduction (pp. 27–150) and a substantial bibliography organized by time period (pp. 151–206). Koester understands “John” to be an early Christian prophet (not an apostle) writing during the final decades of the first century. The book combines features of three genres (apocalypse, prophecy, and circular letter) and is structured around six vision cycles framed by an introduction (1:1–8) and conclusion (22:6–21). Perhaps the most distinctive and valuable contribution of Koester’s introduction is the remarkable thirty-seven-page treatment of the history of interpretation and influence of Revelation.

The commentary proper adapts the typical Anchor Bible format with four elements: (1) the author’s own translation, (2) “notes” on one or more key phrases in each verse, (3) a select bibliography, and (4) “comments” that lucidly synthesize the passage’s message. Koester moves through the book in forty-three sections. These sections include valuable overviews treating the book’s title and six visionary cycles, as well as focused discussion of text units between four verses and twenty-four verses in length. The bottom of each left-hand page indicates the larger unit (e.g. First Cycle), and the right-hand page includes the passage number, summary heading, and verses (e.g. “4. Christ Commissions John to Write [1:9–20],” p. 239). This is a noticeably improvement over earlier Anchor Bible print volumes that include only the name of the larger unit and do not specify the specific verses being commented on.

Koester’s treatment of Rev 1:9 illustrates his priorities and strengths as a commentator. The notes section includes a thorough four-page treatment of John’s exile to Patmos, including a map and a black and white photo of a grave stele from the island. Koester discusses the social and religious life on Patmos, which centered around the family and the goddess Artemis, respectively. He argues that “Roman authorities probably relegated John to Patmos as a punitive action” and clarifies that “relegation to an island” was temporary and did not entail loss of property like the more severe punishment of permanent deportation (p. 242). In the comments section, Koester explains that John’s situation on Patmos fits his self-presentation as “your brother and companion in the affliction and the kingdom and the endurance that we have in Jesus.” John like his readers faced the challenges of “maintaining a distinctive Christian identity in a social context that did not support it” and of “making a living without undue entanglement in the Roman economy” (p. 251).

Koester situates difficult texts in their literary and socio-historical contexts and summarizes the principal ancient and modern interpretations before reaching a measured conclusion. For example, he argues that the scenes of the 144,000 and the great multitude in Rev 7:1–17 provide two perspectives on a single group, followers of Jesus (p. 424). In 11:3, the two witnesses are representatives of the whole church, and the 1,260 days is “a period of oppression in Daniel” and signifies the time from Christ’s ascension to his return at the end of the age (pp. 497–98). In 12:1, the woman refers to God’s people before and after Jesus’s birth (p. 542), while the dragon’s expulsion from heaven (vv. 7–9) results from Jesus’s death, resurrection, and exaltation and does not refer to primeval history or the end of the age (p. 550–51). The beast in Rev 13:1 weaves together allusions to the final beast in Dan 7 with elements from Roman imperial practices such as emperor worship and stories about Nero coming back to life, making the beast “the demonic counterpart to the Lamb” (p. 571). Koester explains that the number 666 (Rev 13:18) challenges readers to see the beast as John sees it. John’s riddle uses gematria, and the Hebrew spelling of Nero Caesar best fits the number and characteristics of the beast (p. 606).

Koester’s general comments on the sixth cycle (19:11–22:5) illustrate his approach to larger overview sections. Koester opens with a succinct two paragraph summary of the text that focuses on the defeat of evil, the vindication of the faithful (represented by the martyrs), and the New Jerusalem as the splendid foil to Babylon the prostitute. Next, he surveys the history of interpretation of this controversial section. Early interpreters in the West, including Papias, Justin, and Irenaeus, emphasized a future millennium. Tyconius (d. 400) and Augustine after him identified the millennium with the church’s present reality, which became the dominant perspective of early medieval interpreter and the Protestant reformers. Koester discusses the futuristic interpretations by Bede (d. 735) and Joachim of Fiore (d. 1202) and the rise of postmillennialism in Britain and North America in the eighteenth and nineteenth centuries. He also surveys the premillennialist interpretations by William Miller and John Nelson Darby that exerted significant influence on Seventh Day Adventists and dispensationalists, respectively.

According to Koester, “modern historical interpretation shifts the focus from the future to Revelation’s ancient context,” but he argues that scholarly comparisons of Rev 20:1–6 to Jewish apocalyptic writings such as 1 Enoch and 2 Baruch obfuscate the vision’s literary function in the book’s stylized presentation of divine triumph over evil (pp. 748–49). While interpreters since the second century have commonly linked the millennium to OT prophecies of the earth’s transformation, such transformation occurs in the new creation, not the millennium. The millennium is connected to the theme of divine justice and reminds readers that God “will bring the activity of evil to an end for the sake of those who are now its victims” (p. 749). Koester argues that “John’s readers would have seen themselves living in the time when Satan and the beast where at work, and not in the millennial age,” though he notes that “the visionary world does not outline a chronological sequence of events that can be correlated directly with the readers’ world” (p. 782).

Themelios readers may dispute Koester’s rejection of the traditional identification of John the apostle as the author of Revelation and may quibble with some of his interpretive decisions. But overall, this is an outstanding commentary that will prove to be one of the most significant treatments of the Apocalypse in this generation. I warmly commend this volume to anyone engaged in serious study of Revelation, and I hope the publisher will soon release a more affordable paperback edition so that Koester’s remarkable commentary can receive the wide readership it deserves.