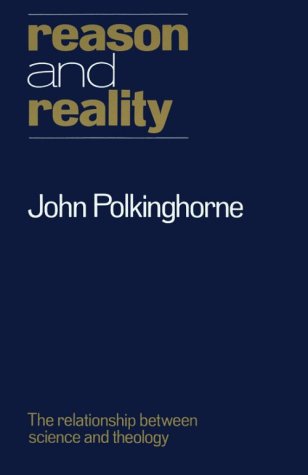 Reason and Reality—The Relationship between Science and Theology

This is Polkinghorne’s fourth book on the relationship between science and theology. In chapter 1, he lays down the outlines of his position: ‘critical realism’ which is committed to the rationality of the world and its intelligibility. This means that by seeking the best explanations of empirical phenomena, we can arrive at verisimilitudinous descriptions of the world. Polkinghorne also rejects foundationalism, ‘the Cartesian search for a totally secure basis on which to construct knowledge’. He thinks that epre and interpretation are inevitably intertwined and rational inquiry is ultimately circular. Nevertheless, we are justified in accepting the circle which possesses the most comprehensive explanatory power.

In chapter 2, Polkinghorne proceeds to discuss the marks of rational discourse. Though he insists that models in physical science are only heuristic devices and the language of science is essentially mathematical, he admits the legitimate place of metaphors in science. In general, metaphors and symbols yield ‘a creative flexibility’ which make them ‘essential for the discussion of those realms of epre which cannot be dispassionately objectified’ (p. 30). Polkinghorne applies the same model of rationality to both science and theology. Theology exactly reflects the unrestricted search for intelligibility which underlies science. Moreover, it ‘is not ungrounded speculation but the attempt to reflect upon the encounter with the divine’ (p. 19). True, science is much more successful but this is due to ‘its self-limiting definition as concerned with certain impersonal and largely repeatable aspects of epre’ (p. 8). Contrarily, theology deals with the more intractable realm of the personal and the infinite.

Polkinghorne offers arguments against ‘the cognitive-propositional view’ of theology which asserts that we have access to divinely guaranteed propositions. Firstly, ‘Because revelation is the encounter with a Person and not the deliverance of a set of propositions …, the Bible is not our divinely-guaranteed textbook but a prime means by which we come to know God’s dealings with humankind and particularly his self-utterance in Christ’ (p. 62). Secondly, this view is undermined by the presence of contradiction within the Bible. Nevertheless, he does not go to the other extreme of a cultural-linguistic view of theology (Lindbeck) and he holds on to the historical nature of incarnation and the evidential role of the NT.

So what is the cross-traffic between science and theology? Theology offers science the possibility of an answer to those meta-questions arising from the latter. Science, on the other hand, offers theology knowledge about the physical world, thereby imposing conditions of consonance which theology must respect. He illustrates the former by arguing that theology can answer two meta-questions raised by modern science: the intelligibility of the world and the fine-tuning of cosmic laws and initial conditions so as to make the emergence of life possible. Both can be rendered intelligible by explaining the cosmos as God’s intelligent creation. He also discusses the recent work on dissipative structures and chaos, and argues that the world is characterized by the interplay of chance and necessity/order. This is consonant with the world as created by a Creator who is both loving and faithful. Similarly, ‘the quantum world is partially dissolving yet also structured, and this dual character corresponds more closely to the Near-Eastern balance between the nature of God in his immanence and his transcendence’ than to the Whiteheadian God or Eastern mysticism (Capra). Nevertheless, modern science does demand a reinterpretation of Scripture, especially the story of the fall which implies a sharp discontinuity in the course of cosmic history (p. 99). He offers some ingenious mythical interpretations in chapter 8.

Polkinghorne himself comments that evangelicals are prone to complain of his ‘insufficient attention to the Bible’ (p. 60). Now he has written on the use of the Bible, probably there will be a new complaint of his ‘insufficient attention’ to the foundational role of the Bible. His first argument against the cognitive-propositional view is not persuasive. It is a non sequitur to argue from the fact that revelation is a personal encounter to the fact that it is not propositional. Instead we can argue that since revelation is personal, it is also propositional because speech is central to personal encounters. Polkinghorne’s second argument can only be replied to by an elaboration of a credible evangelical approach to the Bible, but perhaps there are more resources to deal with those ‘contradictions’ than Polkinghorne would tend to think. In discussing the nature of the world, Polkinghorne toys with the idea of downward emergence: ‘quantum theory itself was the emergent … as the simplified microscopic approximation to a more richly structured reality’ (p. 91). I find this idea rather obscure.

Despite these reservations, I warmly recommend this lucidly written book which manages to combine expert knowledge of science with theological and philosophical insights, while steering away from some extreme positions.