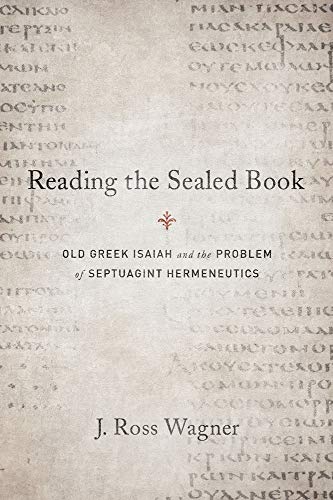 Reading the Sealed Book: Old Greek Isaiah and the Problem of Septuagint Hermeneutics

Ross Wagner, associate professor of New Testament at Duke Divinity School, has produced what can only be described as a tour de force. With a display of great scholarly skill he has tackled what some would consider an intractable problem in Septuagint studies and has demonstrated a methodology which, if carefully applied to other biblical books, could go far toward offering a solution. The problem, as the author defines it, has three aspects, all of them related to the relationship between the source text (Hebrew) and the target text (Greek). The first aspect is the degree to which the source is thought to have dictated the textual/linguistic elements of the translation. The second aspect is the degree to which the translation is dependent on the source, namely, is the translator seeking to present the source to the reader with a minimum of interpretation, or is he self-consciously interpreting the source for the reader? The third aspect of the problem is whether the translation must always be interpreted in the light of the source, or whether it is to be “interpreted solely within the target language and culture” (p. 4).

The methodology that Wagner employs is Descriptive Translation Studies as adapted and developed by Cameron Boyd-Taylor in his book Reading Between the Lines: The Interlinear Paradigm for Septuagint Studies, BTS 8 (Leuven: Peeters, 2011). Wagner discusses this methodology at length (pp. 6–28), showing how it enables one to arrive at the “constitutive” character of the text (i.e., its unique and defining features). He then explains how this approach might be helpful in solving the dispute over the character of the Old Greek (OG) translation of Isaiah. That dispute centers around the proposal that one of the chief purposes of the OG translator(s) was to “actualize” Isaiah’s prophecies for his/their contemporary audience (pp. 31–34). Wagner then turns to the work of Umberto Eco with his concepts of “the model translator” and “the model reader” who share “the cultural encyclopedia” within which both work and read (pp. 37–63). To make this approach workable, the author proposes both a “narrow” and a “wide angle.” He thus proposes to analyze Isaiah chapter 1 in great detail (pp. 64–226), while keeping an eye on how his detailed discoveries appear elsewhere in the book.

It is not possible in a short review of this nature to enter into the details of the analysis. Matters such as word order, sentence structure, word usage, verb forms, cultural implications, and patterning are examined, to name a few. Suffice it to say that the work is done with impressive care and voluminous research. On most pages as much as half of the space is given over to footnotes. One example of the depth of investigation is that ten pages are given to the study of the significance of the Greek “the great day” as a translation of the Hebrew “the calling of assemblies” (Isa 1:13). In this reviewer’s judgment the narrow/wide-angle approach is successful. The detailed work is compelling as regards the character of the translation in chapter 1, and when the findings are applied elsewhere in the book, they are not forced but seem very natural.

The author’s conclusions are these: 1) while G (i.e., the translator[s]) produced a well-formed piece of Greek literature, there is still remarkable faithfulness to the form and structure of the source; 2) G worked hard to produce a text that was coherent, cohesive, and rhetorically powerful; 3) the thematic coherence of the text is enhanced through careful lexical replacements; 4) G used all the devices available in the Greek language to make the message of Isaiah even more powerful to its Hellenistic hearers (e.g., resolving difficulties, explaining ambiguities, making accusations more vivid); and 5) while there is every evidence that G had the Hellenistic “cultural encyclopedia” well in mind, there is no evidence of an attempt to specifically “actualize” the ancient prophecies for the Jewish diaspora of the Ptolemaic period. When OG Isaiah was “[h]eard and studied in the synagogues of second-century Egypt, Isaiah’s sweeping vision . . . required no ‘actualization’ to articulate the living faith and enduring hope of the translator’s community” (p. 237).

As Wagner points out, the conclusions drawn from this detailed study of Isaiah 1 will need to be tested further throughout the book. But I predict that those studies will confirm the validity of the conclusions drawn here, with only some nuancing. This is a model piece of work that will have to be referred to regularly by any one working in Septuagint studies, and indeed, in Isaiah studies.