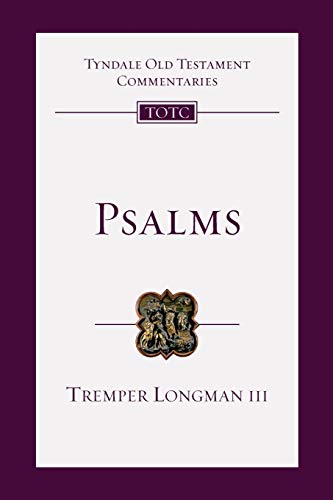 Psalms: An Introduction and Commentary

Tremper Longman’s Psalms is a two-volume commentary (though bound as a single book) in the ongoing revision of the very successful Tyndale Old Testament Commentaries (TOTC) series. This commentary replaces the classic two-volume work on Psalms written by Derek Kidner (1973). Longman, a prolific writer whose incisive scholarship has virtually spanned the scope of OT studies, particularly wisdom and poetry, provides an introduction (pp. 23–54) that deals with the basic issues, and includes a brief statement on the theology of the Psalms. For the most part, he lays out his view of the importance of the historical setting of the Psalms (p. 50)—a plus, in my view—and their adaptation for different and later worship settings without overburdening the reader with the weight of the critical issues, especially the form-critical issues, though he is certainly aware of them. For that perspective students of the Psalms will still have to consult other commentaries, like the three-volume Word Biblical Commentary (Peter C. Craigie, Psalms 1–50 [Waco, TX: Word, 1983]; Marvin E. Tate, Psalms 51–100 [Waco, TX: Word, 1990]; and Leslie C. Allen, Psalms 101–150 [Waco, TX: Word, 2002]) or the Continental Commentaries volumes by Hans-Joachim Kraus (Psalms 1–59 [Minneapolis: Fortress, 1993]; and Psalms 60–150 [Minneapolis: Fortress, 2000]).

Longman treats each psalm under the rubrics of context, comment, and meaning. By context he seems to have in mind the historical and textual contexts, and includes the particular psalm’s connection to neighboring psalms and larger collections in the Psalter, even while he states unequivocally that he does not believe the book of Psalms has any “overarching or systematic structure” (p. 54). Thus in the beginning, he parts company with such studies on intertextuality as that of Gerald Wilson (The Editing of the Hebrew Psalter, SBLDS 76 [Chico, CA: Scholars Press, 1985]), as well as the more current work of Frank-Lothar Hossfeld and Erich Zenger (Psalms 2: A Commentary on Psalms 51–100, Herm [Minneapolis: Fortress, 2005]; and Psalms 3: A Commentary on Psalms 101–150, Herm [Minneapolis: Fortress, 2011]; Psalms 1 is still available only in German). While the broader audience of the TOTC series will not see this as an inadequacy, many Psalms scholars will object to this view—I think justifiably—and insist that much evidence can be found in the book to support the intertextual studies of the Psalter. Thus more advanced students of the Psalms will need to consult Wilson’s 1985 work and his volume in the NIV Application Commentary (Psalms: Volume 1 [Grand Rapids: Zondervan, 2002]), or go beyond Wilson’s work by consulting the Hossfeld-Zenger volumes. Longman further takes advantage of this rubric to identify the literary type (i.e., genre) of the psalm and other contextual matters that bear on the interpretation of the psalm under discussion.

The comment rubric is the place where the author discusses the text of the psalm, highlighting the interpretive issues, including textual and theological insights, as well as difficulties that might pose problems for the general reader. The commentary follows both a sectional and verse-by-verse format. Being the astute scholar that he is, Longman has a knack for sorting out the issues for his target audience, mercifully leaving the more complex issues to other commentaries.

The rubric of meaning is where this commentary shines. There Longman’s perceptive reading of the text becomes the benefactor of his clear and succinct summary of the psalm’s meaning, particularly as a practical guide for how believers should conduct their lives, and an index to the messianic or new-covenant interpretation of the Psalms, both of which are special interests of this commentary. For example, to illustrate the latter interest, the author comments on Psalm 16:10–11: “Even in the Old Testament context, the idea of not seeing decay and enjoying eternal pleasures in God’s presence seems to point to something beyond the grave” (p. 106).

For all the good qualities of this commentary, it will have to stand alongside Derek Kidner’s commentary rather than replace it, but that is the way of commentaries, even in a revised series—some never lose their value (compare Charles Spurgeon’s The Treasury of David, repr. ed, 3 vols. [Peabody, MA: Hendrickson, 2011]), even as they may not be readily available. Kidner’s way of turning a phrase and thus shining a light on the other side of a biblical truth can have no substitute, and his serious engagement with the text at least matches Longman’s, even as we admittedly appreciate the light new discoveries and interpretations can shed on the biblical text. Many thanks are thus due to Tremper Longman and InterVarsity Press for this installment in the revision of the TOTC series. Now we have Kidner’s and Longman’s insightful readings of the Psalms to illumine the world’s most powerful book of prayer. And that means just a little more light to show the way as we walk through life’s valleys, looking to the hills where our help comes from.