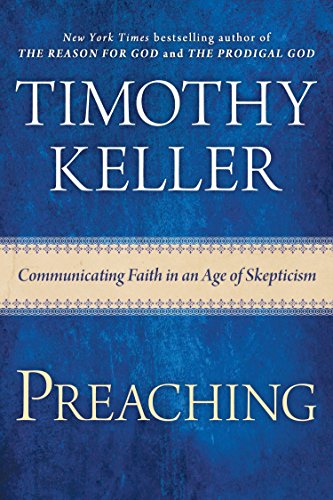 Preaching: Communicating Faith in an Age of Skepticism

Tim Keller got a C in preaching at Westminster Seminary in the early 1970s (p. 211). For those who know his preaching today well enough to pick up this book, that in itself is testimony to the possibility of growth as a preacher throughout one’s life. This book will be a catalyst for many of today’s preachers to take a big step forward in their own growth in preaching. For some, it will be the most important book on preaching they ever read.

Tim Keller is not known publicly for his praying, though his recent book on prayer (also reviewed in this issue of Themelios) is being warmly welcomed. He is not widely known for suffering, though his book on that subject is filled with rich insight. He does not have a famously healthy marriage, though his work on that subject is equally helpful. If he is known for anything, it is his preaching. If any of Keller’s books are to be warmly received by the church and by Christian leaders in particular, therefore, I believe this is it. Reading the book confirms that belief.

It is difficult to assess comprehensively a book that brings together such a variety of strengths into a single volume. Perhaps this observation itself is the first thing to note about the book. That is, one reason this book is so compelling (and Keller’s preaching so persuasive) is that he is able to bring together what are often polarizing approaches. Keller reflects at length on what it means to preach expositionally, for example, and then at equal length on what it looks like to engage the culture. Very few of us push equally hard in both directions. Many of us emphasize biblical faithfulness to the neglect of deep probing of the assumptions and belief structures of our culture. Others of us seek to engage the culture and win a hearing with unbelievers to the neglect of deep biblical study.

This ability to wed what are often held apart is perhaps the key contribution of this book. Throughout, Keller brings together the objectivity of exegetical study and the subjectivity of felt affection; the need for pleading persuasiveness and also for reliance upon the Lord’s power; the need for the rationality of logical deduction and also awareness of the pervasive irrationality of the human heart; deep reading in ancient church history and also in contemporary secular periodicals; preaching the gospel in every sermon and also attending to the shape and tone of the text at hand in every sermon; the appropriateness of carefully thought through methods to preach Christ well and also the importance of instinct in preaching Christ well. This refusal to latch on to one truth at the expense of another lends credibility and persuasiveness to his writing on preaching. Perhaps at times Keller and those who follow his lead should be aware of the temptation to avoid coming down clearly on one end of a spectrum when that is called for. But I believe this ability to be non-parochial and non-polarized is one reason—to bring together yet two more generally polarized clumps—that an ordained minister in one of the most conservative denominations in the world can be a New York Times bestselling author.

How is the book shaped? Keller’s opening premise is that he can help preachers go from bad to good, but not from good to great. This is because “the difference between good preaching and great preaching lies mainly in the work of the Holy Spirit” (p. 11, emphasis original). Keller suggests therefore that it is the preacher’s responsibility to make his preaching good, but only God can make his preaching great. This is a wise and solid foundation on which to build a book on preaching, especially a book by one whom many deem a “great” preacher, because it is both optimistic yet realistic. It brings together human responsibility (working hard to be a good preacher) and divine sovereignty (leaving greatness in God’s hands). It is therefore a truly Calvinistic homiletical approach, neither Arminian (emphasizing human responsibility to the neglect of divine sovereignty) nor hyper-Calvinistic (emphasizing divine sovereignty to the neglect of human responsibility).

From there Keller goes on to three basic areas of attention for the preacher: the text (Part One, “Serving the Word”), the listeners (Part Two, “Reaching the People”), and the preacher himself (Part Three, “In Demonstration of the Spirit and of Power”). Readers familiar with Keller’s ministry will find in the book a fascinating inside look at the mechanics of Keller’s own preaching. Those who have heard him teach on preaching will find much of that material here, though freshly articulated.

Part One deals with the Scripture itself. Chapter 1 argues that preaching is an unfolding of the Bible, not the preacher’s own thoughts. Keller argues for an expository approach, though acknowledges the propriety of occasional topical messages. One distinctive is that he believes it is simplistic to assert that every text has one main point. Chapter 2 then encourages preachers to make sure they preach the gospel in every sermon. Keller explains that this does not mean that every sermon should be evangelistic, because not only unbelievers but believers too need to hear the gospel—unbelievers to be converted, believers to grow. Chapter 3 is related to this and exhorts us to preach Christ from every text. Building on the work of writers such as Sidney Greidanus and Graeme Goldsworthy, Keller outlines a series of ways to legitimately connect the text at hand with Jesus Christ. The chapter wisely closes by pointing out that preaching Christ requires a certain instinct: “Though you should employ many of these ways to preach Christ from all of Scripture, too rigid a formula (or set of formulas) results in being predictable. Often the line from the text to Christ is best perceived by intuition rather than composed by a defined method” (p. 86).

Part Two moves to the listener. This part of the book contains guidance that is harder to find in other homiletical resources than Parts One and Three. In chapter 4 we are helped to preach to the culture not by choosing between adapting and confronting but rather by adapting to the culture in order to confront it. Chapter 5 helps us to engage what Keller calls the “deep narrative structures” of the late Modern mind (Keller avoids the label “postmodern” as he believes Modernism and Postmodernism fundamentally agree on the assumption of individual human autonomy [pp. 122–23]). We are instructed in how to preach to the heart in chapter 6, being reminded (largely via Jonathan Edwards) that the heart is not a matter of emotions only but the animating center of all human thought, feeling, and action. Keller explores six aspects of preaching to the heart.

Part Three is a single chapter on preaching that is fired by the Spirit. This is a return to Keller’s opening premise that the final effectiveness of our preaching is in the Lord’s hands. Preachers will do well to ponder Keller’s solemnizing reflection in this chapter on the tendency for ministers to confuse natural gifting with spiritual grace.

In this summary of the book’s content I have skipped over much of what Keller says, so perhaps I can close by identifying a few further strengths to the book. I will not identify weaknesses, not because I found none, but because a book of such singular helpfulness and insight ought not to be nitpicked; to do so would be disproportionate.

The book, first, is well written. The style is crisply moving prose that covers the territory effectively and then quickly moves on. The tone is informal and engaging without becoming cutesy or distractingly colloquial.

Second, one finds a unique wisdom in this book. Consider the following, as he explains how one can do expository preaching and engage the cultural mindset at the same time.

It is . . . wrong to think that Bible exposition can’t have a very strong focus on human need. Nearly all Bible texts do address such existential issues directly or indirectly. However, if we start with our questions and look only to the Bible for answers, we assume that we are asking all the right questions—that we properly understand our need. However, we need not only the Bible’s prescription to our problems but also its diagnosis of them. We may even have maladies we are completely unaware of. If we don’t begin with the Bible, we will almost certainly come to superficial conclusions, having stacked the deck in favor of our own biases and assumptions. (p. 97).

In this paragraph Keller goes deeper than most of us in both directions—both in the direction of acknowledging that the Bible does address felt human needs, and in the direction of recognizing that our own innate perception of our needs will invariably fall short of Scripture’s revelation of who we really are and how deep our deficiencies really run. This is an example of the wisdom, balance, shrewdness, and maturity that Keller brings to this book on preaching.

Third and finally, I celebrate the note on which Keller concludes the book, a theme that is sprinkled throughout the book but is most clearly articulated at the end: the crucial intersection in preaching of human weakness with divine power. This is doubly needed in a book on preaching from Keller. On the one hand, to welcome our weakness is so deeply counter-intuitive, something so strongly and deeply resisted by the flesh—this inescapably apostolic notion that it is in my weakness that the power of Christ rests upon us. We yearn to preach well, even as we find within us a yearning to be impressive. But the two are mutually exclusive; we cannot preach a Christ worthy of our adoration when we do so with a subtext that communicates the desire for our own adoration. On the other hand, to close the book in this way is needed in a Keller book on preaching. This book is so brimming with penetrating insights worthy of immediate integration into one’s preaching that toward the end of the book one might easily begin to feel overwhelmed. It was wise of him therefore to address this directly. After summarizing that preaching Christ from the heart means to preach powerfully, wondrously, affectionately, authentically, and Christ-adoringly, he remarks: “Feel overwhelmed? Me too. However, a key to developing these traits is not to directly try to have them. Instead, glory in your infirmities so his power may be made perfect in weakness (2 Corinthians 12:9)” (pp. 206–7).

And it is on this note, liberating for all preachers who long to preach in the power of the Spirit, that the book ends in its final paragraph. “If you proclaim Christ and not yourself and let God’s Word come to people through you, you can also become a voice, like John did. It doesn’t matter if in yourself you feel weak. All the better” (p. 210).