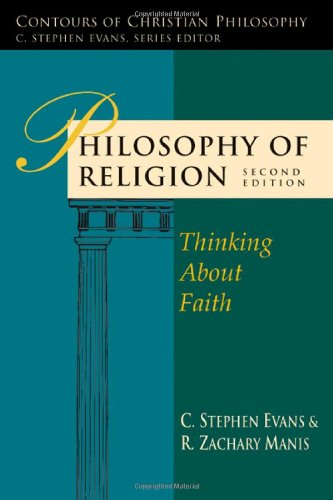 Philosophy of Religion: Thinking about Faith

This is the fourth book in a very helpful series of short introductory-level textbooks, written from an evangelical perspective on various aspects of Christian philosophy. C. Stephen Evans, who teaches philosophy at St Olaf College in Minnesota and is the series’ general editor, has exchanged hats to write this lucid book which should be of interest not only to the would-be philosopher of religion, but to anyone who wishes to think about his or her faith. The book is admirably accessible to the non-philosopher, presuming little acquaintance with philosophical jargon and carefully defining technical terms as they are encountered.

The book consists of six chapters on the classical loci of philosophy of religion (i.e. the arguments for God’s existence, religious experience, miracles, the problem of evil, religious language) bracketed by two chapters on faith and reason. These two chapters, though first and last, are actually the core of the book, for in them Evans explains and justifies the particular kind of thinking about faith which he employs throughout his study.

The pages on argumentation (pp. 40–44) should cure anyone still looking for that irrefutable ‘proof’ of God’s existence. Evans claims that no arguments for God’s existence are ever rationally convincing to all sane people because of prior commitments they bring to arguments (cf. the author’s Subjectivity and Religious Belief, 1978). Again, this need not lead to relativism so long as one is willing to put one’s belief to the test.

Chapters 2–7 rehearse familiar debates in the history of the philosophy of religion, from Aquinas’ arguments for the existence of God to Hume’s treatment of miracles, and from the problem of evil to the logical positivists’ attack on the meaningfulness of religious language. Evans also includes a small section (pp. 126–130) on the objections to religious belief from the social sciences (sociology, psychology) which many textbooks in this subject overlook.

The last chapter returns to the ever-present theme of the relation of faith and reason. Evans denies that the only choices open to the believer are either deductive certainty or an irrational leap of faith. Evans seeks a middle way, that of the interpretive judgment. (He mentions as instances of this kind of reasoning historical scholarship and literary criticism, but he could well have included the natural and social sciences, as these too are increasingly being seen to be ‘hermeneutical’.) The first and last chapters converge in Evans’ central thesis that ‘an interpretive judgment is reasonable when it can survive the process of critical testing’ (p. 169). There is a pertinent reminder that, while we may hold our beliefs with a certain degree of uncertainty, no such halfway house is possible when it comes to day-to-day living.

This is a good book for getting oriented in the discipline, but the student whose appetite is whetted will want to use the bibliography at the end for further reading. Evans might have strengthened his case for the critical dialogue model of reason by explicitly linking it with wider contemporary discussions about the nature of rationality in the sciences. Evans’ model of critical dialogue is best exemplified, for instance, in the work of Karl Popper, the philosopher of science, whom Evans fails to mention. Evans’ introduction to the philosophy of religion comes, however, with a rare bonus: throughout the book he draws out the practical implications of various theistic and atheistic arguments, thereby doing apologetics rather than simply theorizing about it and thus challenging the reader to examine the premises which give direction to his or her own life.