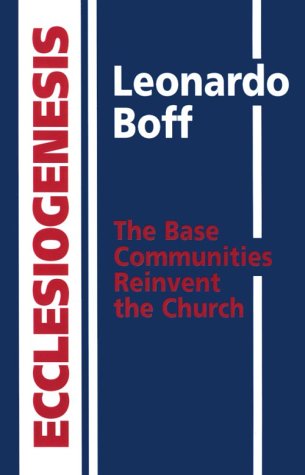 Ecclesiogenesis: The Base Communities Reinvent the Church

In spite of the grandiloquent title, this book is not really announcing the birth of a new church. Rather, it is about church renewal within the Roman Catholic Church through the Comunidades Eclesiais de Base (CEBs). True, the reader will recognize the strident tones so characteristic of revolutionary fervour, but even this is attenuated in the hope that the CEBs will gain a hearing from the Catholic hierarchy, with its centuries-old views of what it means to be church. Boff is appealing for the CEBs to be accepted as legitimate expressions of church, in spite of the absence of priest, bishop and sacraments.

Before Protestant students dismiss out of hand such a seemingly distant concern, they should consider what the clamour is all about. Some Protestant observers (for example, Thomas Hanks, God So Loved the Third World; Guilhermo Cook, The Expectation of the Poor, both published by Orbis Books) have compared the ferment in the Catholic Church in Latin America to the turmoil of the 16th century European Reformation. Boff and other Catholic theologians may begin with ecclesiology rather than with soteriology, but as they gain a more biblical perspective of the church it affects their conclusions on many other basic doctrines. The result has been a profound rethinking of what it means to be the people of God in an antagonistic world.

Protestants will be enthusiastic about Boff’s reflections on biblical passages dealing with the nature of the church as a faith community, the primary role of the Holy Spirit in the life of the congregation, the priesthood of believers (i.e. the role of the laity) and the importance of the exercise of spiritual gifts. Pastors and denominational leaders would do well to learn from his observation that to the extent that any church crystallizes decision-making in its hierarchy and organizational structure, it tends to dry up community. By contrast, Boff’s sociological analysis seems insipid and unconvincing, in spite of a transparent burden for the plight of the oppressed.

Boff calls on Roman Catholic structures to accept the dynamic social expressions of the CEBs as the natural outgrowth of a vibrant faith: ‘One need not be a Christian to be a good politician.… But to be a good Christian, it is necessary to be concerned with social justice, and social justice is a political reality.… Christians in the Brazilian reality who oppose qualitative changes in society are not just conservative citizens. They are Christians disloyal to the gospel, since they are being deaf to the cry of the oppressed that rises up on all sides’ (p. 38).

In the second part of the book Boff deals with topics which emerged from an early ‘Inter-Church Meeting’ held in Itaici, Brazil. Here he deals with questions concerning the institutional form of the church, the ministry of the Lord’s Supper by laypersons and the possibility of ordination for women. This section makes it clear that the book is basically only one part of a family debate which has been going on for the 10 years since this book was written in the halls of seminaries and bishops’ councils. Protestants will not identify with Boff’s views of faith, salvation, evangelism, the mediation of Mary or perhaps even with his idea of the church itself.

It would be a mistake for Protestants merely to observe this discussion from afar, or to denounce unbiblical emphases. Opportunities abound for authentic biblical reflection on the nature and mission of the church, and all those who can contribute to a greater understanding of the revitalization going on throughout the world should be welcome. While Ecclesiogenesis may be easily dismissed as not contributing profoundly to the discussion, it serves to set an agenda to which Evangelicals can respond, if they are willing not only to talk about, but also become, God’s church.