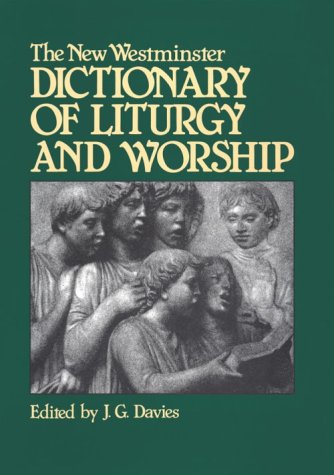 A New Dictionary of Liturgy and Worship

Worship is an activity common to all Christians. It should, therefore, be the great unifying experience between Christians of all types. Sadly, it is not, and one of the main reasons it is not is quite simple—we all tend to assume that normal Christian worship (and by ‘normal’ we often implicitly mean ‘that which God prefers’) is the worship that we are used to in our local church (or that we wish existed in our local church’). Our worship is the norm—everybody else’s is a deviation. It is surprising how many intelligent, reasonable, committed Christians find it difficult to see their worship against a wider perspective than that of their own limited experience, ‘taste’ or prejudice. Here, however, is a book that, sensibly used, should go some way towards correcting such narrowness. This Dictionary supersedes A Dictionary of Liturgy and Worship, published in 1972. It is half as big again as its predecessor and, so rapid have the changes and developments in worship been world-wide since 1972, it has been necessary to add nearly 50 completely new entries, as well as rewriting some of the original ones. It is published in hardback, though a cheaper paperback version is much to be desired.

The entries are clearly set out in two columns per page, are cross-referenced to other entries both within the text of each article or section and frequently at the end, and nearly always have a bibliography. They tend to fall into a number of types, and the reader needs to be aware of this.

Some are short, factual definitions: so that if you look up ‘Apse’, for example, you will find a straightforward eight-line definition with no interpretation on the part of the contributor. Descriptive articles of this kind need not be short: looking up ‘Liturgies’ will bring you to 25 pages of general descriptions of the rites of Baptists, Brethren, Orthodox, Old Catholics, Jehovah’s Witnesses, Anglicans, and so on.

Other entries, particularly ones with a doctrinal edge, reveal the beliefs or preferences of the author. Thus, for example, the writer of the article on ‘Oblation’ concludes: ‘Only the doctrine of the identification of the oblation of the Church, and of the individual member of it, with the oblation of Christ in the celebration of the eucharist as the divinely-appointed anamnesis of the latter is able to safeguard the uniqueness of Christ’s oblation on the one hand, and provide for man’s desire and need to offer all that he is and has to God on the other.’ Such a statement may be capable of being squared with Scripture, but it is at face value not self-evidently so to many Evangelicals and needs to be treated cautiously.

While an issue like that raised in the last example is sufficient of an ‘old chestnut’ to be detectable by most Evangelicals, some, because of their very newness, are in danger of being swallowed uncritically. The article on ‘Inclusive Language’, for example, sets out in one and a half pages an at first sight very persuasive argument for the removal of male-dominated ‘sexist’ language from worship. It is only on reflection that you realize that the article makes no mention of the points that conservative Evangelicals and others would want to make about the ‘givenness’ and authority of Scripture, the nature of revelation, the God-given role of gender, headship and so on. On the contrary, the article gives the impression that opposition to inclusive language comes only because it ‘strikes deeply at people’s emotional feelings about their sexual and social identity’.