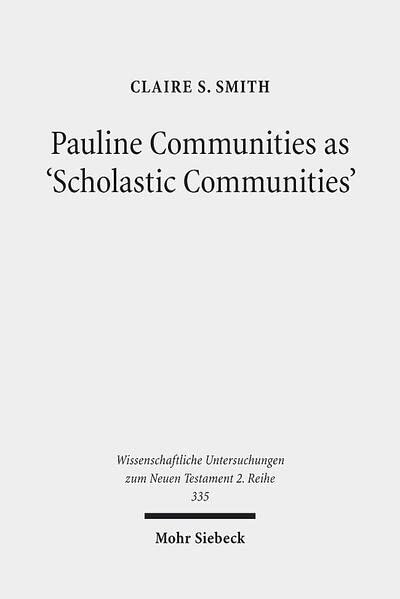 Pauline Communities As ‘Scholastic Communities’: A Study of the Vocabulary of ‘Teaching’ in 1 Corinthians, 1 and 2 Timothy, and Titus

This revised doctoral dissertation, supervised at Moore Theological College, Sydney, presents a development of Edwin Judge’s largely neglected 1960–1961 thesis that Christian communities were characterized by a greater focus on ‘learning’ or moral training than on corporate cultic or ‘religious’ practices. (His work has recently been reprinted: E. A. Judge, ‘The Early Christians As a Scholastic Community: Part I and II’, in The First Christians in the Roman World: Augustan and New Testament Essays [ed. James R. Harrison; WUNT 2.229; Tübingen: Mohr Siebeck, 2010].) Smith adopts a very different approach, but nonetheless reinforces Judge’s essential conclusions. She examines ‘teaching’ as a semantic domain in 1 Corinthians and the Pastoral Epistles, in order to establish the practice and contribution of teaching in these communities—although not its content. This is not, then, a theological study; rather, it is descriptive, focusing on how this particular vocabulary may reflect emphases and patterns of ecclesiastical practice.

In choosing these letters, Smith does not assume a homogeneity between them, but seeks to compare the findings in each. The methodological weaknesses identified by James Barr of those word studies that focus on etymology, history of usage, or otherwise assume a word’s continuity of meaning despite being located in differing contexts or genres, are described, but expressly avoided. In large measure this is achieved by investigating similar words together (identifying degrees of synonymity, antonymity and complementarity), limited to nine semantic domains; by noting when a given word does and does not have connotations of teaching/learning (e.g., λέγω, ‘I say’, may or may not refer to teaching); and by limiting the study to four broadly contemporaneous texts).

Although a few distinctives are noted, mostly between 1 Corinthians and the Pastoral Epistles, these tend to be downplayed as probably situationally explicable. However, the greater frequency of ‘traditioning words’ in 1 Corinthians than in the Pastoral Epistles is noted as unexpected. This contrasts with the traditional view that the Pastoral Epistles depict a greater concern for the establishment and maintenance of a body of teaching against the significant challenge of false teaching. However, little is concluded from this finding. Rather, the similarities are considered to be of greater significance. This shared focus contrasts with the practices understood within the voluntary associations and mystery religions, which have very little focus on education.

Although it is recognized that Judge’s description of ‘scholastic’ communities creates problems, Smith nonetheless adopted it in the title of her monograph; however, the descriptor ‘learning communities’ is recognized as a more accessible alternative. Text-focused study was not the goal of these communities. Rather, the focus was on character formation in contexts where ‘texts’ were largely oral/aural, rather than written, and where close, authoritative relationships invited the imitation of modeled lives, and not merely attendance at formal discourse. This impinges, of course, on the range of physical contexts for educational activities. None of this relegates the role of God as the prime teacher and revealer, the supreme source and authority. As a consequence, the human teacher would do well to model ongoing learning, rather than be seen as one who has mastered, and therefore hands down, a fixed and acquired curriculum.

In terms of our understanding of early church practices, it is perhaps surprising that such a small subset of epistles in the Pauline corpus reveals so many words that focus on the activity and contribution of teaching. By comparison, these letters, indeed the wider Pauline corpus, reveal far less in regard to the early church’s practices of worship, mission or social action. Furthermore, where we do find reference to these, and other, activities, they often presuppose a context in which they are being taught. That is, ‘educational activities’ shaped all aspects of community life. It is important to weigh, however, to what extent the focus on teaching in these letters is descriptive of an early Christian focus on education or was expressly intended to correct a lack of emphasis on this.

In view of present day views of pedagogy, it would also be interesting to explore in even greater detail the relationship within these texts between teaching and learning, especially in terms of formation. How significant is it that so many of the words focus on the dissemination, rather than the acquisition of learning? To what extent might contemporary church communities focus additional energy on educational activities that are not teacher-centred, are rather more relational, and perhaps more effective in Christian formation than traditional, didactic methods?

The conclusions of this study eloquently justify a return to exploring Judge’s argument from a number of additional perspectives. This is a prestigious monograph series, and the study thoroughly deserves its place within it.