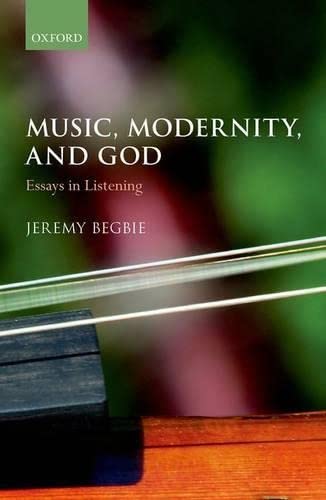 Jeremy Begbie has for many years had a unique voice in theological scholarship. Begbie’s extensive training and contributions in the areas of music, the arts, and theology give him insight into discussions that most theologians and most musicians have only limited access to.

Music, Modernity, and God adds another helpful volume to Begbie’s fascinating body of work. Put simply, “this book is an invitation to theologians, and to any with a lively interest in theology, to listen to music—to its sounds, to those who make and enjoy them, and to the extraordinary literature this beguiling art form has generated” (p. 1).

Modernity, Begbie argues, has been greatly influenced by music, and vice versa. Yet music and its contributions have been largely ignored in theological discussions relating to modernity, which Begbie understands to be both “a cluster of attitudes or mindsets inextricably bound up with social and cultural practices” and a somewhat loosely defined period of history—“the modern era” (see pp. 4–5).

In many ways, this neglect of music in theological discussions is understandable, and Begbie does not begrudge theologians their typically word-focused approach. He does, however, suggest that giving attention to musical theory, practice, and language can enrich our theological explorations: “My aim is to demonstrate that the practices of music and its discourses can bear their own kind of witness to some of the pivotal theological currents and counter-currents that have shaped modernity. . . . I hope to show that the world of music is capable of yielding highly effective ways of addressing and moving beyond some of the intractable theological aporias that modernity has bequeathed to us” (p. 1).

Music, Modernity, and God offers a handful of essays designed to model this type of discourse and explore the unique contributions music can make in some fascinating areas. Chapter 2 examines John Calvin’s views on music in the life of the church, concluding that while Calvin often unnecessarily denigrated music as a mere servant of religious words, he provided some helpful concepts in seeing the relationship between these expressive realities. Chapter 3 explores key features in Bach’s compositions, showing how his approach to music interacts with modernity. Here Begbie draws out some illuminating themes from Bach’s body of work.

Chapter 4 looks at the differing views of two key French figures: the composer Jean-Philippe Rameau and the philosopher Jean-Jacques Rousseau. Begbie uses this dialogue (Rameau seeing the foundation of music in the design of the universe; Rousseau seeing the foundation of music in human passions) as an opportunity to explore the concept of “natural theology,” focusing on the value of this enterprise and the importance of carefully defining “natural” in such discussions. Chapter 5 analyzes the exalted claims made by the German Romantics with regard to the nature and power of music. It then addresses the unwarranted modern suspicion of Romanticism, exploring what may helpfully be gleaned from this movement.

The book concludes with three chapters that tie these varied discussions together and present Begbie’s overall aim in providing these examples of musical/theological discourse: “In certain respects at least, music may actually be better equipped than language to allow some dimensions of the theological realities in question to disclose themselves” (p. 205). As one example, Begbie explains music’s ability to transcend spatial categories. Visually speaking, two objects cannot fill the same space—one either sees one object or the other, or perhaps a translucent blend of both. But musically, two notes can sound simultaneously and each fills all of the available aural space—not as a composite, but as unique yet interpenetrating sounds. Here is one way that music can provide a helpful model for thinking about the triune relations or the dual natures of Christ, for example.

The careful qualifications in the previous quotation (“in certain respects . . . may actually be . . . some dimensions”) are characteristic of Begbie’s argumentation overall. This caution in making assertions may strike readers as needless hedging, and certainly makes the book more tedious. Virtually every significant concept, however familiar to the reader, receives a carefully nuanced definition and in some cases a brief discussion before Begbie even begins to explore his point about theology, music, language, etc. While this does impede the flow of Begbie’s arguments, his attention to detail and precision are strengths. Many readers will prefer stronger statements and reduced technicality, but Begbie’s consistently scholarly approach provides a foundation for more popular treatments of these important yet complex concepts.

Begbie’s proposal is that we take some unique features of music (shared aural space, mutually resonating tones) and “make them available” to our theological conceptualizations and discourses. As it stands, our theological language tends to adopt spatial metaphors: God is “above,” God is “immanent,” etc. By contrast, musical language could lend further depth and insight to our ability to think about and discuss theology, as concepts like “resonance” and “harmony” become available to the theologian in addition to the standard theological phrasings (p. 208).

In the end, Begbie’s argument is exceedingly practical. He does not merely wish to leave us with a better understanding of the contours of modernity; he offers these essays as examples of the type of discourse that would be opened up if theologians take seriously his call to engage with music (p. 9).

What Music, Modernity, and God offers is an opportunity to interact with crucial theological realities in fresh ways—not denying the language and tradition in which these realities have been explored for hundreds of years, but opening new possibilities for discussion, understanding, and enjoyment.