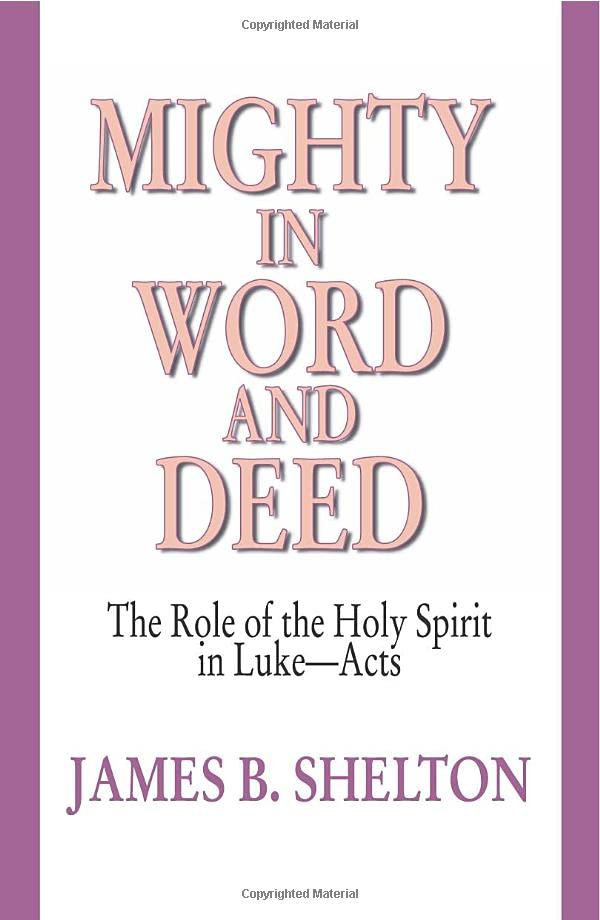 Mighty in Word and Deed: The Role of the Holy Spirit in Luke-Acts

Written by James B. Shelton Reviewed By Joel B. Green
New Testament

Although the more immediate setting-in-life of this study is the author’s doctoral research under John Drane (University of Stirling), it is manifestly with the life of the church and its mission that Mighty in Word and Deedis most concerned. Indeed, the bulk of this redaction-critical examination of the role of the Holy Spirit in the Lukan corpus is set within an inclusio provided by Shelton’s reflections, first, on ecclesial and academic controversy regarding the person and activity of the Spirit, and, last, on the ‘ramifications and applications’ of this study for both academy and church. For Shelton, ‘In order to accomplish its mission, the church today needs to rediscover the joy and power contained in Luke’s message of the Holy Spirit’ (p. x).

Shelton’s primary methodological stratagem is to insist on letting Luke be Luke—not using Paul (especially Rom. 8:9) or John as a lens through which to read Luke-Acts. ‘Clearly, the major pneumatological systems in the NT are not intended to be indiscriminately inter-changeable’ (p. 160). Thus, his is a redaction-critical (perhaps better understood now more broadly as composition-critical) examination oriented around exploring Luke’s distinctive reasons and unique occasion for writing. This does not lead Shelton to posit with any narrow precision a discourse situation for Luke-Acts; rather, he insists that Luke’s ‘… fundamental concern is to show how the witness concerning Jesus spread’. Thus, Shelton underscores Luke’s concern with the Spirit’s role in ‘inspiring and empowering witness’, while discounting any necessary interest on Luke’s part with the role of the Spirit in conversion (p. 135).

After initial reflections on the general uniqueness of the Lukan portrayal of the Spirit, Shelton undertakes a broad examination of the material in Luke-Acts in which the Holy Spirit is at the fore. A lengthy chapter is devoted to the Lukan birth narratives, three chapters to the onset of Jesus’ ministry, and three chapters are concerned with the role of the Spirit vis-à-vis aspects of Jesus’ ministry. Subsequent chapters treat the significance of the ascension of Jesus for the work of the Spirit and the activity of the Spirit in Acts. Though Shelton is not blind to the role of the Spirit in signs and wonders, prayer, and praise, he repeatedly maintains that ‘throughout his Gospel and Acts, Luke’s predominant interest in the Holy Spirit is in empowerment for witness’ (p. 157). As an important sidenote, Shelton’s investigation also consistently counters Conzelmann’s attempt to outline three salvation-historical epochs in Luke-Acts; on the contrary, Luke ‘… is primarily interested in how inspired witness occurs in any era’ (p. 161).

Shelton’s thesis provides a helpful corrective to those approaches to pneumatology in the NT that fail to read authors on their own terms. And he is undoubtedly correct to emphasize as he has the import of the Spirit’s role in inspiring faithful witness, even if in doing so he seems to have exaggerated this theme somewhat. Perhaps as a consequence of his narrow focus, Shelton has not always addressed sufficiently the relevant exegetical conundrums (e.g., What is the relation between water, spirit and fire baptism in Lk. 3:15–17?) or adequately argued his position so as to exclude the role of the Spirit in conversion in such celebrated stories as the mission in Samaria (Acts 8:4–25) and Peter’s encounter with Cornelius and his household (Acts 10). What is more, given the breadth of this study, we might have anticipated that it would reflect more pointedly on how ‘inspired witness’ functions within the narrative and theological aims of the third evangelist. For example, what is the role of the Spirit in vouching for the characters in Luke-Acts who align themselves with God and serve as his spokespersons? Or how might inspired speech be used in Luke-Acts to certify a correct interpretation of ‘the events that have been fulfilled among us’ (Lk. 1:1–4)? Such questions suggest that still more can be made of the Lukan pneumatology, though persons interested in the lie of the land and its implications for the church would do well to have Shelton as their initial guide.