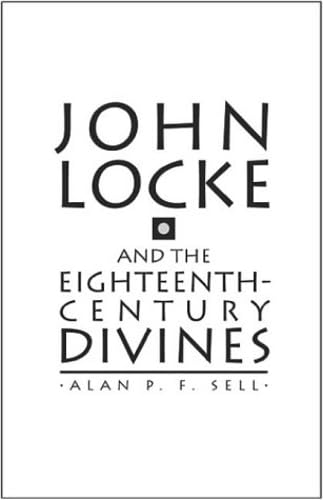 Locke’s big idea was that no-one is born with innate ideas about the world—let alone those which might supply knowledge of God. This epistemology was critiqued by those coming in his wake on the grounds that there are (as Locke admitted) some principles which are innate—e.g. the idea of pleasure and pain and that Locke’s was the high road to scepticism. ‘Locke appeared to rest morality on nothing more than custom and the praise and blame apportioned in the light of it’ (p. 19). By way of reaction, Tyrrell wanted to know how anyone could come to know God through the information we gather through the senses; could the spiritual really come forth from the material? In fact Norris thought that through mental images things in the world did not cause but stimulated ideas in the mind. Locke had a lot to answer for in getting people to think that even ordinary people lived ‘inside their heads’. What has come to be known as ‘foundationalism’ means that in getting to know God we have faith in the resurrection of Jesus built on top of the knowledge ideas of existence, duration, knowledge, power, pleasure and happiness, enlarged to God-sized infinity. This is not Thomist (reason’s knowledge superseded by faith’s grasp of revelation) but rather revelation is new data for Reason to assess: ‘natural Reason enlarged by a new set of Discoveries communicated by god immediately, which Reason vouchsafes the truth of.’ We use reason to decide what could count as revelation; whereas according to Jonathan Edwards, reason is only to defend and explain revelation, not to judge it. Locke’s point seems to have been that it is spiritual suicide to partition off a bit of our knowledge which is revealed and spiritual from the common sense which governs the rest of our life.

Locke was of course, pre-Romantic; knowledge as personal encounter was not considered. Thus faith was, for Locke, an intellectual assent to propositions our reason could not arrive at. Locke with his alarming tendency to paraphrase Scripture, saw Scriptural support for natural theology providing a certain amount of what can be known about God from Romans 1:17 (‘for God’s righteous character has been revealed’). However, ‘Locke’s insistence on the place of revelation … which places him at a distance from all who contended that Christianity was simply a republication of the religion of nature’ (p. 207); especially in ethics—the gospel, not Natural, Law was looked to.

Sell has a tendency to overplay Locke’s Calvinist inheritance; there is perhaps a lapsed Calvinism as there was in Grotius (and there would be markedly in Hume). The fact that we are born like blank sheets meant for Locke that we are not represented by Adam in the sense that what he did fixes our destiny (there was a dislike of believing in such a thing as ‘human substance’ anyway); Locke softened the consequences of the noetic fall—Romans 1:28 read as ‘given over to an unsearching and unjudicious (not ‘reprobate’) mind’; education is heavily relied on as a panacea, to the extent that Sell concludes that Locke was ignorant of the role of the Holy Spirit. The problem lies not in our reason or will but in our appetites (our reason should overwhelm our appetites when it is given the chance to consider whether a certain course of action will be reckoned punishable or meritorious at the Last Judgement). One can draw the Trinity from the Bible (Locke not wholly Arian) but it is not explicitly there (not wholly orthodox).

Perhaps Locke is best known for his belief in toleration of belief and worship unless there was harm such as treason lurking behind these: ‘in view of the limitations of human knowledge and the consequent impossibility of attaining absolute certainty, the toleration of differing views is right and necessary’ (quoted, p. 154). It is however the buzz-words like toleration and a minimal account of Christian belief (‘Jesus is the Messiah’) which encouraged the likes of Toland and Tindal who went further down the slippery slope of ‘rational, non-mysterious religion’ in the generation following Locke’s death. For evangelicals in an age of pluralism these are issues worth pondering and debating.

To be a little critical, there is not as much interaction with the morass of Locke scholarship as one might have hoped. This can be excused of course:—it is a book about the reception of Locke (e.g. Stillingfleet in his own time, Edwards afterwards), not about Locke himself. Yet one senses a lack of depth; there are too many characters adduced as indebted to Locke for any one of them to be treated in any detailed way. Nor is there very much on how Locke is relevant for the questions and theologies of today: perhaps that is to come in Sell’s next book, although some attempt is made here. One would do better to look at Woltertstorff’s John Locke and the Ethics of Belief, or even at the early part of Stephen Williams’ Reason and Reconciliation: a window on modernity.