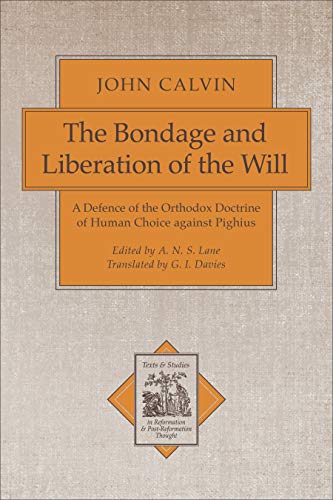 Calvin: The Bondage and Liberation of the Will: A Defence of the Orthodox Doctrine of Human Choice Against Pighius Texts and Studies in Reformation and Post-Reformation Thought 2

This is a clear and lively translation (with good, full notes) of a full-blooded and occasionally long-winded Calvinist response to Albert Pighius’ Ten Books on Human Free Choice and Divine Grace (1542). As the editor informs us Pighius, far from being consistently doctrinaire as a Catholic, held to ‘a novel theory of original sin according to which the only effects of the fall of Adam were the introduction of death and the imputation of the guilt of Adam’s sin to all humanity. There was not talk of the corruption of human nature as a result of the fall. The lust that human beings experience derives from nature as created and was experienced by Adam before the fall’ (p. xvii).

Roman Catholic writers like Pighius often tried to escape the charge of ‘Pelagianism’ by showing how much ‘grace alone’ meant to them; this however did not exclude an insistence on free will such as found in the earlier (and, Pighius implied, better) Augustine. Calvin counters by showing that even the earlier Augustine wanted to preserve free will as having originally existed in Adam before the fall, only so that humans would not be able to blame God or the devil for their sinning. As for the various Greek fathers, their views are often idiosyncratic. Anyway, Calvin like a good ecumenist, insists that a Church Council, especially Orange (p. 529) is of more weight than the opinions of individual fathers. As Orange held: ‘it is by the work of the Holy Spirit in us that we are caused to want cleansing’.

With Luther, Calvin contends that the sole function of the law is to point to our need for grace. Yet, modifying Luther (to whose debate with Erasmus surprisingly little account is made), Calvin acknowledges that good works are valuable and please God, but only because God has deigned to be pleased with them, not because of any actual worth inhering in them.

Calvin does make reference to his reforming predecessor at the beginning of Book Two. He loves to employ the same beloved image from the prophets: Isaiah 10—‘Why does the axe boast?’ So, God is in control not only of the natural world ‘but also governs the hearts of men, bends their wills this way and that in accordance with his choice, and is the director of their actions, so that they in the end do nothing which he has not decreed, whatever they might try to do’ (p. 38). This teaching has the purpose of making the believer rest free from anxiety in the omnipotence of God. God is a wonderful craftsman who uses bad tools well (p. 40).

The humanist training gave Calvin the confidence to discount the authenticity of the Ps-Clementine Recognitions: they are the ‘imaginings of some stupid monk’. Most fathers, he argues (tendentiously!) refer to the pre-fall capacity when they wrote that humans were created with free will, in the sense of a will that could have chosen not to sin. If someone is, like Paul of Romans 7, only half-free, he could hardly have been free before his conversion. Calvin regretfully admits that the early church, at least in part, did indeed over-exalt free will; yet this was because God had not yet brought the Church to exercise its collective mind on the matter. A spur to focus on the issue came through the writings of Augustine, who Calvin is sure is on his side. Our powerlessness against sin is part of the punishment for freely and deliberately sinning in Adam.However, although our sinning is necessary, it is also voluntary because we enjoy it and use that volitional part of us to do it: it is not, as Pighius thinks, only a problem of the flesh; naturally, argues Calvin, we want to sin; Pighius is closer to the Platonic idea that everyone desires ‘the good’. The ‘label’ Manichean which Pighius uses against him is exactly what Augustine himself was accused of by the Pelagians. Pighius is thus an enemy of grace hiding behind the praise of nature (as Augustine had said in his Contra duas epistolas Pelagianas 2.1.1.)

The editor helpfully directs us to Calvin’s shrewd use of Aristotle, such as the notion of humanity’s ‘weakness of will’ (akrasia). Evil is, to speak technically, an ‘accident’, like ‘happiness’ or sadness—our humanity is not removed when we cease to be good. This can be seen also in Calvin’s employment of the Thomist habitus-concept which the editor explains: ‘What is changed in conversion is not the faculty or substance of willing, nor merely the actions of the will. It is, rather, something in between, the quality of “habit” (Latin, habitus) of the will’. Sometimes we might think that Calvin in speaking of the Fall was thinking in terms of choices earlier in each person’s life, by analogy with a sick person (who) may have broughtillness on himself by lifestyle, or, following Aristotle: ‘Just as when someone has thrown a stone, he can no longer take it back, but it was in his power either to hold on to it or to throw it (Nic. Ethics 3.5). This is not Calvin’s strongest analogy: surely (one might protest) something of Adam threw/made us throw. Calvin does not really come close to resolving the antimony; rather, he reinforces its tension.

Yet it seems clear that Calvin was on strong ground when interpreting Paul’s ‘flesh’ concept as more ‘a deliberate desire which is opposed to the Spirit’ than as a synonym for ‘the body’ (p. 180). He sees the “freedom of God’ as tied to the notion of prevenient grace which make it possible for obedience—for this happens by God’s effecting conversion, followed by continuing of it. (Calvinists were always more realistic about the paucity of the saved—not that many showed interest in God because they did not receive a turn-around experience.) ‘But God does not want to be extolled as generous (i.e., in giving the possibility of salvation to all) in such a way that it ceases to be free. Moreover its freedom resides in the fact that he bestows it on those whom he will’. He argues that Pighius attempt to hold both divine grace and human freedom in tension is self-contradictory. Simply, the whole of Scripture ‘(w)hen it urges us to devotion, to the fear of God, and to holiness of life, it teaches us that we can attain all those things only if it has been granted to us by God’ (p. 200).

The editor, translator, commissioning editor (R. Muller) and publisher are to be congratulated for making available at reasonable cost this important part of the Church’s collective mind.