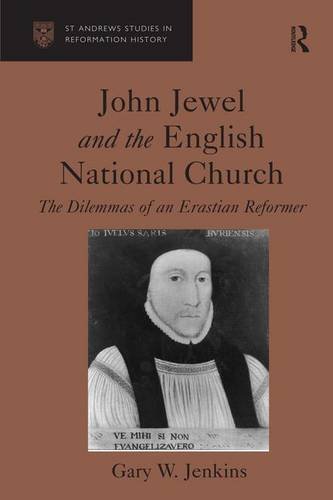 JOHN JEWEL AND THE ENGLISH NATIONAL CHURCH: THE DILEMMAS OF AN ERASTIAN REFORMER’, ST ANDREWS STUDIES IN REFORMATION HISTORY

The origins of the Church of England have been a much fought-over battleground recently. The scholarly debate over the English Reformation has often produced more heat than light, but several features, helpfully delineated in Jenkins’ volume, are beginning to emerge and take shape. The English Reformation is at last being studied in a wider European context with a realization that English reformers, such as John Jewel (1522–71), the renowned Elizabethan Bishop of Salisbury, could claim to his friends in Zurich that in terms of doctrine the Church of England believed the same Reformed doctrines. Any mythical notion, therefore, of the English Church being a via media between Rome and Geneva is simply an absurdly anachronistic reading of nineteenth-century High Church ideas back into the complex sixteenth-century reality. The very concept of a definable ‘Anglicanism’ is seen as a chimera, as the leaders of the English Church saw themselves as simply another branch of the Reformed continental churches, albeit in a unique context. The Marian Exiles who returned to England and became some of the leading bishops in Elizabeth’s Church were resolutely Reformed in theology and if there is any via media, it is probably a fraught passage between Zurich and Geneva. Jenkins is at pains to bring out the close connections and fraternal bonds between the frustrated scholar Jewel, who only reluctantly accepted the bishop’s mitre, and Zurich reformers, especially the Italian Peter Martyr. Much of Jewel’s enduring reputation is that of the officially sanctioned apologist for the Church of England, bravely fighting off both enemies without (papists) and enemies within (the more radical puritans, the emergent presbyterians).

Jenkins’ basic thesis is that in Jewel’s mainly controversial and polemical works we have the public figure of the faithful and loyal bishop, but in his private correspondence, mainly with his Swiss reformer friends, we see a frustrated academic with distinct puritan leanings, bemoaning the lack of reforming progress in his native England. Jenkins terms Jewel as ‘an iconoclast in a prelate’s vestments’ and puts this observable dissonance down to the underlying tension in many of the English reformers—a pronounced Erastian worldview giving the godly prince, in this instance Elizabeth, sovereignty in both civil and ecclesiastical realms, yet solidly maintaining the traditional Protestant sola scriptura as the final arbiter in doctrinal authority. This would inevitably lead to the bloodshed of the Civil War in the next century, as the English church had no recourse after the monarch’s undisputed sovereignty.

Although immensely well-respected by his contemporaries, and often claimed by opposing sides in later theological disputes, Jenkins is rather belittling of Jewel’s scholarship, often accusing him of being ‘disingenuous’ with his selective use of sources in which his negative methodology often led him to focus more on pulling down the Catholic edifice, rather than building up the Protestant one. With at times scant evidence Jewel is trounced for his ‘faulty’ logic, ‘flawed’ theology and a ‘banal’ approach to the various theological topics in his writings. It should be remembered that Jewel was not trying to be original or witty; he was trying to defend the English national church from her foes and dismiss the arguments ranged against her. He wanted to show that it was the papists who were the theological innovators, not the Protestants, and that the Fathers did not support the false medieval accretions that the Roman Catholic Church had gathered over the centuries. Jewel was not writing a positive Protestant systematic theology; his was a different task. He did not wish to reinvent the wheel; those who wanted a systematic and comprehensive theology could easily have read one of the many English editions of Calvin’s Institutes, Bullinger’s Decades, or even Martyr’s Commonplaces. Jenkins is right to focus on Jewel as orator and rhetorician, but that is surely not to deny that he also had aspects of the humanist and theologian about him. This book is a provocative and insightful study of a much neglected and pivotal character in the English church, and the tensions and paradoxes exposed lays the ground for further fruitful research.