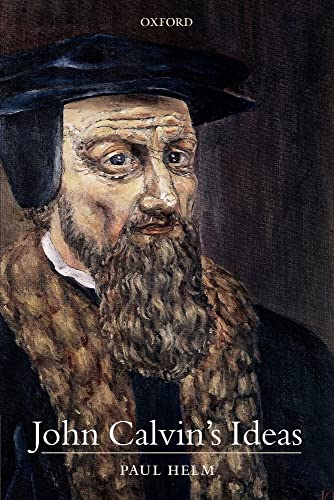 This is John Calvin in the hands of a competent philosopher. Helm’s study seeks to reveal Calvin as a theologian who nevertheless displayed considerable familiarity with a wide range of philosophical conceptualities which he was willing to utilize, disparage, or tailor depending on his particular concerns. The result is a wonderful treat for Calvin scholars, philosophers and theologians. For any who are interested in Calvin for reasons other than his use of philosophical ideas it will be hard Helm’s study intersects with other issues in Calvin studies (such as his exegesis) and sheds invaluable light on them.

Helm is clear that Calvin was neither a philosopher nor a philosophical theologian and he does not try to turn him into one. However, his Calvin clearly resides in the radically reshaped world of the medieval tradition which has emerged from the work of (among others) Richard Muller. As an heir to certain strands in late medieval Augustinianism, this Calvin is willing to use the distinctions of the schools when he finds it beneficial to do so and he exhibits a use of scholastic method in intellectual inquiry that makes it difficult to place him in radical discontinuity with Protestant scholasticism. A recurring feature of Helm’s study is to show how Calvin’s ideas had precedence in the medieval tradition, particularly in Thomas, such that some of his theological ideas are not easily disentangled from philosophical associations.

We are led through Calvin’s thought by progressing from metaphysical questions (the Trinity, Christology, providence), to anthropological ones (the soul, free will), and then to epistemology (accommodation, natural theology and the sensus divinitatis, revelation). A return to metaphysics in a chapter on the angels acts as a bridge to questions of morality and ethics as seen in Calvin’s view of the relationship between divine power and goodness and in his appeal to natural law. A fascinating final chapter deals with matters of causation, time and change as they present themselves in Calvin’s doctrine of the atonement. The discussion is demanding in plenty of places but the rewards of a good wrestle with the text are immense. Throughout, Helm works with very fine distinctions, often between two different concepts (usually found in Calvin or the tradition), which when analysed with his philosophical precision become extremely helpful tools for understanding how Calvin’s ideas are functioning. For example, in the final chapter Helm’s discussion of Calvin’s distinction between justification (what Christ achieved) and personal justification (what I appropriate by faith), related to Calvin’s happy use of an Aristotelian fourfold causal schema in explaining justification, is a marvellous example of how the theological hot water we can get into when relating faith and works can be tremendously cooled by some conceptual precision in the use of terms like ‘cause’ and ‘condition’ (404–406).

Helm states that his book contains no treatment of predestination because this has been wrongly held to be Calvin’s central dogma and axiomatic first principle; by ignoring it here Helm feels he can underline the plurality of Calvin’s ideas. This is arguably a substantial loss for us and for Calvin: we do not get the chance to see Calvin’s doctrine of predestination explored with the same care and sympathy as his other ideas and I doubt the central dogma charge is removed from Calvin’s door simply by leaving it out. The doctrine needs to be explained from the inside out, as it were, and shown to draw on a wide range of separate metaphysical and anthropological presuppositions which surface throughout all of Calvin’s work such that ‘predestination’ cannot control the whole. At points Helm does touch on the doctrine in exactly this way and it would have been good to see more in this truly fine study.

David Gibson is the Minister of Trinity Church, Aberdeen, Scotland. He is author of Reading the Decree (T&T Clark, 2009) and co-editor of From Heaven
He Came and Sought Her (Crossway, 2013).