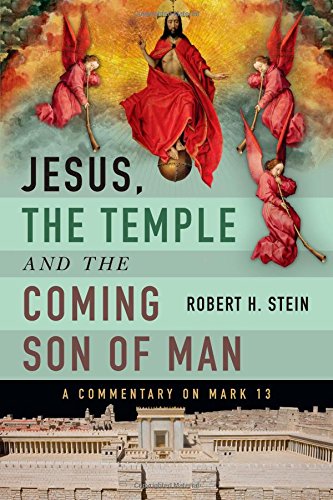 Jesus, the Temple and the Coming Son of Man: A Commentary on Mark 13

Robert Stein is a giant among evangelical scholars of the Gospels. Stein taught for over thirty-five years at Bethel University, Bethel Seminary, and the Southern Baptist Theological Seminary, and has authored major commentaries on Mark and Luke and various books and articles on the Synoptic Gospels, the parables, the life of Christ, and hermeneutics. In his latest book, Stein combines his exegetical skill, clear communication, and mature theological reflection in a first-rate commentary on Mark 13, one of the NT’s most difficult and debated chapters.

Jesus, the Temple and the Coming Son of Man begins with two chapters devoted to introductory matters, which are followed by five chapters of commentary; it concludes with Stein’s interpretive translation of Mark 13, a thorough bibliography, and useful indices.

In chapter one (“Determining our Goal”), Stein deftly summarizes the first, second, and third “quests” for the historical Jesus, noting the key players, their presuppositions, methods, and aims. He acknowledges that Mark 13 has attracted more attention by source critics than any other similarly sized biblical passage, and he summarizes some of the main views and their drawbacks. Stein’s own work “is based on a traditional, author-oriented hermeneutic and seeks to understand the meaning that the author of Mark 13 sought to convey to his first-century readers” (p. 38). Stein explains that Mark’s audience was probably Greek speaking Gentile Christians who were familiar with Christian traditions and the OT.

Chapter two focuses chiefly on the genre and structure of Mark 13. Stein acknowledges various proposals for the genre of Jesus’s Olivet Discourse (apocalypse, prophecy, testament, or farewell discourse) and concludes that the chapter is best understood as a historical narrative along with the rest of Mark. He then presents and interacts with six commonly proposed outlines of this chapter. Stein acknowledges that most scholars agree that the chapter addresses the temple’s destruction and the Son of Man’s coming, and the “basic issue involves which passages deal with the former and which deal with the latter” (p. 43). He outlines Mark 13 in five sections and devotes a chapter to each.

Chapter three addresses Jesus’s prediction of the destruction of the temple and Jerusalem in 13:1–4. Stein asserts that the disciples’ two-fold question in v. 4 is “the key for interpreting what follows” (p. 61) and concerns the temple’s destruction, predicted in v. 2.

In chapter four, Stein comments on Mark 13:5–23, which he understands as Jesus’s answer to the question in v. 4 concerning the temple’s coming destruction. Stein discusses eight significant proposals for interpreting the “abomination of desolation” in v. 14 (pp. 85–93) and concludes (with Joel Marcus and Ben Witherington III) that it most likely refers to “the actions of the Zealots and their leaders, John of Gischala and Eleazor in A.D. 67–68, who were involved in numerous sacrilegious actions within the temple” (p. 92). While I found Stein’s argument persuasive, it is unfortunate that he does not discuss the possibility of multiple fulfillments of Jesus’s prediction in v. 14, first around A.D. 70 and finally at the end of history (cf. James Edwards, The Gospel according to Mark, Pillar New Testament Commentary [Grand Rapids: Eerdmans, 2002], 395–400; Walter W. Wessel and Mark L. Strauss, “Mark,” in Matthew & Mark, Revised Expositor’s Bible Commentary 9 [Grand Rapids: Zondervan, 2010], 925–27).

In chapter five, Stein argues that v. 24 introduces a new section of the Olivet Discourse that points beyond the temple’s destruction to Jesus’s second coming. He interprets vv. 24–25 as “poetic expressions of God’s actions in history” (p. 112), in light of similar imagery in the OT prophets. Stein’s exegesis is strong, but readers might want more reflection on what the cosmic language like “the stars will fall from the sky” positively signifies. Stein criticizes N. T. Wright’s influential view that “the Son of Man coming in clouds” (v. 26) refers figuratively to Yahweh becoming king, rescuing his covenant people from exile, and inaugurating a new world order when Jerusalem is sacked by Rome (Jesus and the Victory of God [Minneapolis: Fortress, 1997], 320–68). Stein reasons that while Wright resolves some problems (e.g., “in those days,” v. 4), he does not do justice to other Markan references to the Son of Man coming in glory and judgment.

In chapter six, Stein explains that the parable and two sayings in Mark 13:28–31 resume Jesus’s teaching concerning the temple’s destruction in vv. 1–23. He argues that ταῦτα (v. 29) and ταῦτα πάντα (v. 30) take up the same expressions in the disciples’ question in v. 4 and have the same referent. Thus, “this generation will not pass away” refers to the destruction of the temple and Jerusalem in the lifetime of Jesus’s contemporaries. In an otherwise thorough treatment, Stein only devotes a little over one page each to the fig tree parable and Jesus’s controversial saying concerning “this generation.”

Chapter seven considers the parable of the watchman and the closing exhortation to be alert in Mark 13:32–37. Stein explains that the opening phrase “but about that day” indicates a shift in subject from the temple’s destruction back to the Son of Man’s coming, as in vv. 24–27. He reasons that Jesus’s difficult saying in v. 32 that not even the Son knows the hour “involves a very high Christology indeed. Jesus is not only distinct from humans and angels, he is superior to them and is uniquely God’s Son” (p. 131). The repeated appeal to “keep awake” indicates that Jesus’s earlier warnings against apocalyptic preoccupation and frenzy do not weaken hope but rather encourage believers to anticipate and pray for the Son of Man’s coming.

Stein concludes the commentary with an idiomatic translation of Mark 13, annotated with his explanatory comments. For example, he renders v. 4 as follows: “Tell us, when will these things take place, and what will be the sign preceding all these things [that will warn us that the destruction of the temple is about to take place]?” (p. 136).

Chapters 3–7 follow the same outline and interpretive approach presented in Stein’s Mark, BECNT (Grand Rapids: Baker Academic, 2008), 582–626. Jesus, the Temple and the Coming Son of Man includes additional bibliography, such as recent commentaries by Beavis, Black, Focant, Marcus, Wessel and Strauss, and key monographs by Adams, Chanikuzhy, Gray, and Pitre. The two introductory chapters and interpretive translation are completely new, and the commentary employs transliterated Greek and footnotes and appears to be moderately rewritten and expanded. Given Stein’s longstanding interest in redaction criticism (going back to his 1968 Princeton dissertation), it is somewhat surprising not to see more discussion of the Synoptic parallels in Matthew 24 and Luke 21. Interested readers may consult Stein’s article on Luke 21 in SBJT 16.3 (2012): 18–27.

Readers may quibble with some of Stein’s conclusions or wish for more explanation in some places, but we may all be grateful for the author’s lifetime of faithful scholarship on the Gospels. Pastors, students, scholars, and informed general readers can all benefit from this important book, which is the most thorough and helpful commentary available on Mark 13.