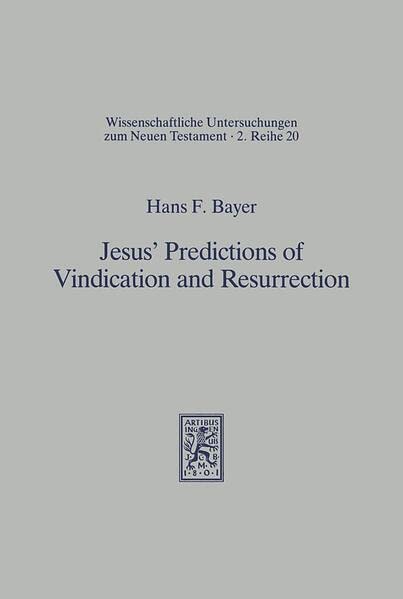 Jesus’ Predictions of Vindication and Resurrection

Did the historical Jesus actually believe and teach that he would be crucified, resurrected and exalted to his Father’s right hand? In an academic environment which barely admits of the possibility that Jesus believed himself to be the Messiah—a concept vague enough not to require any supernatural interpretation of his nature or prophetic explanation of his knowledge—the biblical critic who would answer this question affirmatively must provide a persuasive case indeed. To this ambitious task Hans F. Bayer, currently a lecturer in the Freie Theologische Akademie in Giessen, West Germany, dedicates himself in this revision of his 1984 Aberdeen thesis under Professors R. S. Barbour and I. H. Marshall. The results appear in the form of yet another landmark volume in the prestigious WUNT series edited by Tübingen Professors M. Hengel and O. Hofius, a series which is distinguishing itself as perhaps the most prominent German outlet for dissertations and theses of relatively conservative and even evangelical bent.

The book falls into three parts of unequal length. More than half of the work considers implicit predictions of Jesus’ vindication. These include Jesus’ promise not to eat of the fruit of the vine anew until he should eat it in God’s kingdom (Mk. 14:25 pars.), his references to the cup he must drink (Mk. 10:38 par.; 14:36 pars.), the baptism with which he must be baptised (Mk. 10:38 par.; Lk. 12:50) and the hour which was to come upon him (Mk. 14:41 par.; Lk. 22:53), his citation of the cornerstone passage (Ps. 118:22) at the end of the parable of the wicked husbandmen (Mk. 12:10 pars.), and his enigmatic pronouncement concerning the sign of Jonah (Mt. 12:38–40 pars.). A much shorter section then considers the explicit resurrection predictions. These include the three relatively detailed statements in Mt. 8:31 pars.; 9:31 pars.; and 10:33–34 pars., as well as the briefer references in Mt. 9:9 and 14:27–28. The third concluding part very briefly examines the correlation, background and thematic integration of these various sayings into the wider message of Jesus.

The studies of individual passages in each case subdivide in two: a detailed discussion of their provenance and a briefer survey of their meaning. Bayer analyzes the linguistic pedigree of each text in meticulous detail, invariably arguing for a Palestinian Jewish-Christian, pre-Markan origin of the triple tradition material and for a similar pre-Matthaean and/or pre-Lukan source influencing the more significant variations in those two gospels. This kind of labour seldom leads to exciting reading, irrespective of author, but in today’s academic climate it is absolutely essential. Bayer recognizes that such pre-synoptic provenances do not automatically lead to a Sitz im Leben Jesu, but he shows that in each case the arguments against attributing an important core of each saying to Jesus fail to convince.

If the substance of each of these predictions is authentic, then Bayer concludes that Jesus did anticipate his own ‘somatic resurrection to immortality’. He also realized that he must first undergo death accompanied by divine abandonment and judgment. Subsequently God would vindicate him; both rejection and exaltation were equally ordained by divine necessity. The diversity of first-century Jewish views concerning resurrection and the post mortem destiny of God’s people ensured that none of Jesus’ predictions was explicit enough for all in his audiences to know exactly what was going to happen. Hence the distinction between implicit and explicit references is somewhat anachronistic, and none of the predictions contains enough detail to pass successfully for vaticinia ex eventu.

Helpful subpoints, many from the frequent excursuses, also abound. The metaphor of the cup points only to the fact and not to the mode of judgment. But comparison with the metaphor of baptism suggests that the latter focuses more on outward persecution and the former (the cup) more on inward abandonment by God. The cornerstone passage serves to identify the evil tenants as the rulers of Jerusalem rather than functioning as an appended proof-text for the resurrection. Jonah most likely reported his adventure with the big fish to the Ninevites; this and not the preaching of repentance constituted his ‘sign’. Mention of ‘three days’ before the resurrection may simply reflect a standard idiom for a short period of time. The intricacy of the debate on the background and meaning of the ‘Son of man’ phrase renders its presence useless as a criterion for determining the authenticity of a passage, although probably a combination of Bultmann and Lindars is needed—both apocalyptic and generic elements seem present and authentic.

The over-all structure of Bayer’s discussion is crystal clear and the cumulative force of his arguments compelling. Along the way, a few of the links in his chain seem weaker than others, especially when he is arguing for Matthaean and Lukan distinctives as pre-synoptic, but this is probably inevitable in the fairly subjective discipline of dictional analysis. The style is at times a bit stodgy, and grammatical infelicities and redundancies occasionally betray the fact that the author’s native tongue is German and not English. These very minor complaints are more than adequately compensated for by Bayer’s copious coverage of all the significant German works in consistently ample footnotes, a task which most of us in English-speaking academia wish we could accomplish as effortlessly.

As I worked through Bayer’s study, two scholars of diametrically opposite perspectives kept coming to mind. Both currently hail from Oxford. The one is James Barr, who has criticized evangelicals for what he calls ‘maximal conservatism’. This is the approach which seeks to buttress evangelical views by quoting the most conservative non-evangelicals who support them wherever possible, while rejecting those scholars’ views where they dissent from evangelicalism, even if those views are logically entailed by the arguments employed earlier. The other scholar is Roger Beckwith, who has repeatedly lamented evangelical appropriation of critical methodology at the expense of a full-orbed defence of the authenticity of all of Jesus’ sayings (cf. e.g. his recent lopsided review of Colin Kruse’s New Testament Models for Ministry in this journal). I suspect that both Barr and Beckwith would view Bayer as a classic example of what they find wrong with evangelicalism.

I see things quite differently. Granted there are several occasions when Bayer seems not to argue for the positions he defends but merely cites a German authority who happens to agree with him, and granted there are even more occasions when he might have stated the significance of his conclusions for Christology and for Jesus’ self-understanding in less muted terms, nevertheless the vast majority of his study presents an exemplary paradigm for what evangelicals writing NT theses must do today if they wish to defend the authenticity of a disputed portion of the sayings of Jesus. Only this type of painstaking sifting of the evidence for and against each small portion of the text can do full justice to the complexities of the debates, and it is my judgment that Bayer has proved more than equal to the task for the corpus of material he has chosen.