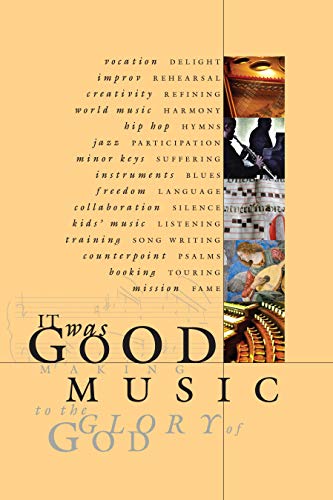 It Was Good: Making Music to the Glory of God

Ned Bustard has released a follow-up anthology to his earlier book, It Was Good: The Making of Art to The Glory of God (Baltimore: Square Halo, 2007). Bustard notes in the preface that the task of glorifying God through music is diverse, and warns the reader to expect some disagreement between the contributors’ different perspectives.

The book’s diversity can seem like a mixed bag to a casual observer. I was glad to see the inclusion of Charlie Peacock (I love/loved the Civil Wars, now defunct). And there are other familiar voices such as the Irish hymn writer Keith Getty. But with contributions from so many thoughtful musicians discussing their role in the making of music of all types, I couldn’t help longing for my ears to be able to be as stimulated as my mind was while reading. It’s the same problem I have with recipe books. Taste buds are irrelevant and long to be engaged. My ears would have loved to enjoy what my eyes were reading about.

At any rate this book bravely attempts to explore various nooks and crannies in the art of music-making from a Christian perspective. For example, the volume’s thirty essays consider the necessity of delight in children’s music (Katy Bowser), Jazz (William Edgar), hip hop (Shai Linne), the value of rehearsing (Tom Jennings), the dynamic of collaboration (Michael Roe), the art of listening (Mark Chambers), the role of modern hymns (Getty), the adventures of touring (Drew Holcomb), and the “music” of silence (Brian Moss). And that’s just for starters. There seems to be no musical stone unturned in Bustard’s world of music.

One useful tip may help all would-be readers of this book: make sure you have your laptop or iPad handy as you read since the diligent musician will be eager to explore the doors these chapters open. Over and over again, I found myself chasing down various leads instigated by the various contributors. Curiosity led me to inquire about the lives and craft of the contributors. I searched for YouTube performances and looked up musicians who the contributors noted as influential. Whole new worlds were revealed and the value of this anthology started to sink in.

This book was also humbling to read. As a professional musician in Los Angeles for the past three decades, singing on dozens of movie scores (from Apocalypse Now to Godzilla) and recording with Bob Dylan, Chris Isaak, Harry Connick, and others, it was amazing to step into the world of musical experience and expertise of such varied and thoughtful men and women—truly a musical consortium. Our God gives gifts to men and women in all shapes and sizes, and in so doing he maximizes his glory.

Probably the most stunning and extraordinary essay was on participation by Michelle Stearns. In her chapter titled “Plays Well With Others,” she introduces the reader to an “ensemble” called The Really Terrible Orchestra. Yes, there really is such an orchestra. Amazingly, this orchestra of “would-be musicians” exists purely for the joy of playing together. To say that they are a novelty group would be an understatement, but apparently they have become an international sensation (just not on my radar!). At this point, I dove for my laptop as Google led me to hear and see firsthand what she was talking about. And I experienced the delight that orchestra brings, as I watched the players express themselves, without the “constraint of perfection” hanging over their heads.

As a worship leader in a local church continuously struggling for balance between perfection and “good enough,” Stearns’s contribution was a helpful reminder that music must on some level foster the aspect of delight, or it will have fallen short of its most charming and God-given potential.

I was also grateful for the interview with Keith Getty as he discussed the privilege of writing music for the church. He affirms what I have found to be true: there is no privilege for a musician quite like writing a song that helps a congregation to sing about the truth of divine things. His modern hymn “In Christ Alone,” co-written with Stuart Townend, arguably already a classic, has earned Getty the right to discuss song writing in general, and his view on the importance of melody needs to be required reading by all worship song writers who have a tendency to elevate rhythm-driven songs at the expense of a free-standing melody. As a song writer and one who leads a congregation in singing, I was challenged to seek to chain together patterns of notes that can stand alone, and fly solo, melodies that are independent of accompaniment.

For musicians, ruts are a normal (even if potentially hazardous) part of the job. The musician’s field of vision can tend to shrink, unless the musician is forced—often kicking and screaming—outside of his comfort zone. This book had that effect on me, and I trust will do the same for my fellow musicians seeking to make music to God’s glory.