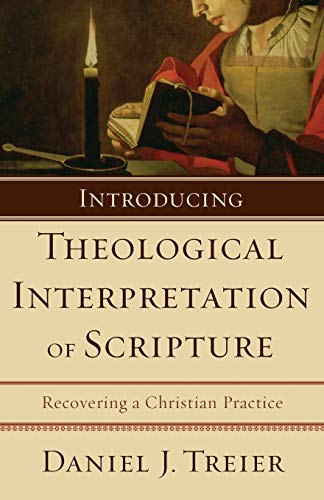 Dr Treier, associate professor of theology at Wheaton College, has written a fine historical and theological introduction to the well known and vital issue of interpreting Scripture theologically. His introductory chapter, ‘From Karl Barth to “Postmodern” Theory’ (pp. 11–36), sketches how this theological interpretation declined from the eighteenth century onwards because of the rise of ‘critical biblical scholarship’. Barth was the forerunner of a quest to recover this theological approach that gained momentum in the 1990s. His Letter to the Romans and Church Dogmatics, which were saturated with scriptural exegesis, provided a model in which theological commitments and exegetical insights were tightly interwoven. Treier charts how Evangelical Protestants and Roman Catholics, who found themselves caught ‘between faith and criticism’ and had lost ground in a larger battle with ‘modernism’, began to engage in rather different ways with critical biblical scholarship and to interpret Scripture theologically. The rise of postmodern approaches and the focus on the role that communities play in interpretation also provided the catalyst in this movement towards recovering theological exegesis.

The rest of the book traces the theological interpretation of Scripture from two main perspectives: (1) ‘Catalysts and Common Themes’ (chaps. 1–3), and (2) ‘Continuing Challenges’ (chaps.4–6).

In the first chapter, ‘Recovering the Past: Imitating Precritical Interpretation’ (pp. 37–55), Treier singles out several features of pre-critical reading that have rightly been taken on board in the current recovery. This spans more than 1,000 years, involves numerous interpreters from various locations and with significant differences of interpretive theory, and contains a considerable number of weaknesses. Yet positive features of pre-critical interpretation have been regained: the Scriptures were read as a corporate, religious activity by those who were convinced of the present reality of God. The biblical texts, though diverse, were understood as a unified whole. They have their own ‘historical’ meaning yet were ‘meant for us’ since they catch us up with the saving events. Moreover, by means of typology and allegory the classic interpreters found Christ throughout the Bible (pp. 51–55).

The second chapter (pp. 57–77) deals with the ‘Rule of Faith’, a ‘basic summary of the biblical story centered on identifying God as triune—Father, Son, and Holy Spirit … [which] took tangible shape in the ecumenical creeds and directed the church’s interpretation of Scripture for centuries’ (p. 57). This Rule is able to preserve the truth, encourage a wider set of doctrinal interests and commitments, provide explicit boundaries, and help restrain human tendencies to twist the Scriptures in self-interested ways. Treier draws heavily on the writings of Francis Watson, who as a biblical scholar appropriates Christian doctrines in the midst of exegesis. For Watson all Scripture requires interpretation with the reality of Jesus Christ as the centre of its narrative world. Life in the Christian community shapes our reading of the biblical texts, while the contemporary context outside the church causes us to reflect theologically on the meaning of Scripture. While some division of labour between biblical studies and systematic theology may be necessary, it should be functional not normative. Unfortunately, it has often had the effect of driving theologians away from Scripture.

Chapter three, entitled ‘Reading with Others: Listening to the Community of the Spirit’ (pp. 79–100), picks up one of Watson’s key elements, namely, interpreting Scripture within the context of God’s people (not just as individuals), and with Christian maturity as its goal. The works of Lindbeck, Hauerwas, and Fowl are assessed within the context of Christians’ ongoing struggles to live and worship faithfully before the triune God in an ever-deepening relationship with him and others. The Holy Spirit’s work in shaping our Christian communities can then be a factor in how we understand the scriptural texts.

Part 2 of the book takes up the ‘Continuing Challenges’ (chaps. 4–6) to the theological interpretation of Scripture. Fundamental to this enterprise is ‘Engaging Biblical Theology’ (chap. 4, pp. 103–25). Recognizing that it has had a complicated history, Treier traces its modern development as a discipline and asks whether it can provide a bridge or serve as an interdisciplinary program between biblical exegesis and systematic theology. He discusses a range of issues including the scope of biblical theology, how one should organize it, and its relationship to other theological disciplines. My own view is that biblical theology has a greater internal coherence than this chapter suggests and can be integrated with systematic theology more effectively (though note pp. 190–99).

Chapter five, ‘Engaging General Hermeneutics’ (pp. 127–56), asks the question, ‘How should we apply general theories of interpretation for any text to the special case of understanding the Scripture?’ As Treier interacts with the contributions of Heidegger, Gadamer, Ricoeur, Hirsch, Thiselton, Fowl, Vanhoozer, and others, he recognizes that general and special hermeneutics share much overlapping territory, although biblical interpretation constitutes a somewhat distinct province. Since the Christian reading of Scripture concerns living in a way that pleases God according to the image of Christ, then all understanding has a theological component to it.

The sixth chapter, ‘Engaging Social Locations’ (pp. 157–86), addresses the issue of theological interpretation by Christians in a context of ‘globalization’, especially in a postcolonial world and in light of the rapid growth of Pentecostal Christianity in the global South. We are reminded that the Christian faith is more than ‘Western’; as Andrew Walls affirms, it is ‘unique in its portability’ (cited on p. 183). Treier comments, ‘Redemption in Christ leads us to anticipate a glorious future that continues to involve culture’ (p. 184).

Treier’s concern for an informed recovery of the theological interpretation of Scripture is timely (see his conclusions, pp. 187–205). A discussion of the ‘domains of discourse’ between systematic theology and biblical studies would have further clarified a number of issues. Also, what takes precedence when the rule of faith or the assertions of systematic theologians are at variance with or go beyond what seem to be the plain statements of the text of Scripture? Treier’s survey of the landscape is vast, and he writes charitably of others’ views.