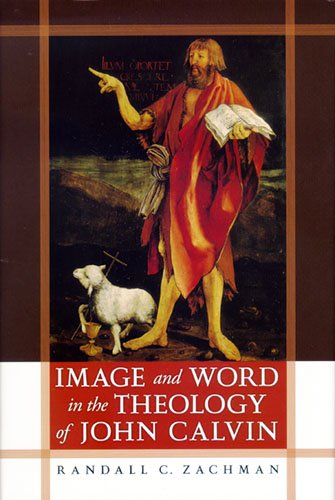 Image and Word in the Theology of John Calvin

Edward Farley contends in Faith and Beauty: A Theological Aesthetic (Aldershot: Ashgate, 2001) that the concept of beauty has “virtually no presence among Reformation theologies [of God]” (p. 8). He specifically identifies contemporary Protestant theology as “anti-aesthetic” due to its iconoclastic roots in the theology of the Reformers (p. 68). Are the Reformers, specifically John Calvin, all to blame for Protestantism’s general disinterest in beauty? Or is there perhaps a peculiar kind of beauty unique to Protestant theology that deserves further attention?

To be sure, the narrative told by Farley regarding Protestantism’s disdain for visual representations of the invisible God is all too familiar. In fact, Calvin’s primary argument for eliminating graven images in worship and focusing on the hearing of the Word stems from this supposition. Randall Zachman argues (contra the received view and as part of a growing consensus among Calvin scholars), “Calvin insisted throughout his theological career that the invisible God does become somewhat visible, in what he called ‘living icons or images of God’, while nonetheless remaining invisible” (p. 2). Such notions are central to Zachman’s thesis whereby he endeavors to demonstrate that “the interdependence of the Word and the work of God, or proclamation and manifestation” is an essential motif of Calvin’s theology (p. 7).

In part one, “Living Images of God the Creator,” Zachman identifies God’s self-manifestation in the works of creation as those that display God’s eternal wisdom, power, and goodness both in the universe and in us. These splendid representations of the glory of God in creation, however, need God’s Word to clarify our clouded minds so that we can see God’s power in his works. These images are not replaced by God’s Word, according to Calvin, but are clarified by the Word in order to direct our attention to those living images of God “so that we rightly contemplate the God who is represented therein” (p. 41).

In doing so, this display of God’s power is not simply for our contemplation but for our enjoyment such that “our enjoyment of the good things of creation should sweetly allure us to the enjoyment of the source of all goodness in God” (p. 55). As such, God’s care for his creation reflects his goodness and our enjoyment thereof as he sustains our lives in the face of death. Additionally, God’s providence serves to direct the care of the universe and the events of human history, guiding the pious believer through the tension “between the self-manifestation of God and the often-troubling hiddenness of God in God’s works,” providing hope that God will continue to preserve a remnant of his people (p. 73).

In part two, “Living Images of God the Redeemer,” Zachman highlights those signs and symbols that mark the manifestation of Christ both in the Law and the Gospel, which in turn serve to demarcate the children of God. These signs are necessary because those living images of God in creation, particularly in human beings, are defaced due to the sin of Adam. The Law, through various visual signs and symbols (e.g., the Passover, Covenant, Sabbath), foretells the coming Christ. Moreover, God provides various symbols of his presence (e.g., the Tabernacle, Ark of the Covenant, Temple, etc.) to remind the Israelites that he is with them. The prophets, however, not only foretell Christ but also indict Israel for her attempts to confine God’s presence to these images. They often do so by using vivid language and other representations to convey the Word of God that would otherwise remain hidden to his people.

Jesus Christ, then, is the fulfillment of the Law and the Prophets. He is the living image of God who is “the source and meaning of all other living images of God” (p. 257). The Gospel of Christ serves as a visual portrait of Christ whereby God “appends … many forms of visual confirmation, in terms of miracles, visions, and other people as exemplars of grace, as well as the sacraments” (p. 289). Consequently, pious believers are affirmed and strengthened in their faith “by hearing the promises in the Gospel and by seeing them portrayed and represented before our eyes in the sacraments, even though the Holy Spirit is necessary for both to bear fruit in our minds and hearts” (p. 343).

Zachman’s landmark work, with its copious references to Calvin’s writings and attention to the historical development of his thought, provides Protestants the opportunity to alter the received view of Calvin’s theology as being “anti-aesthetic.” In doing so, he opens the doorway for a thoroughly Protestant and evangelical contribution to the burgeoning discipline of theological aesthetics that connects to both Augustine and Jonathan Edwards. As such, beauty, along with her siblings the true and the good, reemerges as a central concept for understanding the nature of God. Moreover, Zachman restores the proper emphasis on the “goodness” of creation, even after the Fall, that entails our contemplation and praise of the Almighty. For the sake of clarity, though, perhaps Zachman could have used the term imago Dei to distinguish the image of God in humanity with the “image” of God in creation; otherwise humanity’s special status seems blurred. Nevertheless, Zachman makes a seminal contribution to Calvin studies that deserves a wide readership and further examination, especially among evangelicals.