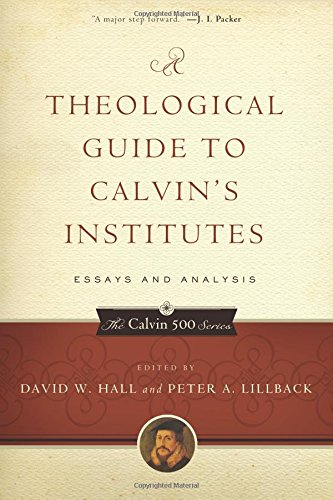 A Theological Guide to Calvin’s Institutes: Essays and Analysis

This volume is a companion to and a commentary on John Calvin’s magnum opus, The Institutes of the Christian Religion, which is to form a part of the commemorative corpus for the Calvin Quincentenary in 2009. The work is comprised of nineteen essays written by nineteen scholars who were selected for their sympathetic reading of Calvin’s work and their teaching of this material for a considerable amount of time. Additionally, this volume contains a foreword by J. I. Packer and a bibliography compiled by Richard C. Gamble and Zachary John Kail.

This book will be a helpful companion to readers of the Institutes for a number of reasons. First, the reader will profit from the expertise of multiple scholars instead of just one. The editors write, “What this volume offers is a chorale with many voices; we believe that the chorale is superior to a solo” (p. xvi). This feature of the work not only provides the reader with added variety; it also adds depth and breadth to the commentary. While a single commentator may specialize in one or two areas of Calvin’s theology, the approach taken in this work ensures that each section of the Institutes receives a thorough treatment by a specialist. For example, Calvin’s doctrine of civil government (4.20) receives five pages of analysis in T. H. L. Parker’s Calvin: An Introduction to His Thought (Louisville: Westminster John Knox, 1995; see pp. 157–61). François Wendel devotes even less space to the subject in Calvin: Origins and Developments of His Religious Thought (trans. Philip Mairet; Grand Rapids: Baker, 1997). However, in A Theological Guide to Calvin’s Institutes, David Hall devotes thirty-one pages to Calvin’s doctrine of the state.

Secondly, the essayists frequently appeal to the two other major sources of Calvin’s thought: his commentaries and sermons. In addition to providing support and illustrations to the authors’ conclusions, the commentaries and sermons often serve the reader by clarifying and/or amplifying Calvin’s teaching in the Institutes. Moreover, by appealing to these other sources, the authors are less susceptible to the dogmatic accommodations that Richard A. Muller warned about in his work The Unaccommodated Calvin.

Thirdly, the reader will benefit from the numerous attempts to place Calvin and his thought within their sixteenth-century context. The first chapter of the work is dedicated exclusively to the historical context of the Institutes, and many of the following essays attempt to do the same with the subject matter covered. This reminds the reader that Calvin’s Institutes is a sixteenth-century work and must be read as such.

Fourthly, the reader will also benefit from the contributors’ treatment of apparent contradictions in Calvin and the Institutes. Joel Beeke addresses various statements Calvin makes about assurance and doubt in the Institutes. Robert Reymond discusses a number of Calvin’s statements on the Bible that may or may not suggest that he held to what later became known as the doctrine of inerrancy. Robert Peterson evaluates the various statements in Calvin that are relevant to the question of Calvin’s view of the extent of the atonement.

Finally, Richard Gamble and Zachary John Kail have compiled an “Essential Calvin Bibliography” for readers who are interested in further study. This bibliography includes listings of the primary Calvin texts, as well as secondary works that are arranged under the following headings: Calvin’s Biography; Calvin’s Cultural Context—Social and Intellectual History; Calvin’s Theology; Analysis and Critique; Piety, Worship, and Ecclesiology; Calvin’s Exegesis and Hermeneutics; Calvin and Social, Ethical, and Political Issues. Furthermore, essays two, six, and sixteen include bibliographies of their own relating to the subject matter covered.

If there is a weakness to this work, it is the lack of uniformity in the essays. For example, essays two, six, and sixteen include bibliographies, while the rest do not. Additionally, the sizes of the essays vary. Though most of the essays are around twenty pages in length, the first and the seventh are seventeen pages or less, while the fifth, eighth, twelfth, and eighteenth are over thirty pages. This lack of uniformity, however, is a small fault and should probably be expected from a work that is comprised of nineteen essays written by nineteen different scholars.

In conclusion, A Theological Guide to Calvin’s Institutes is a welcome companion to the Institutes. Readers will undoubtedly profit from the analysis of this chorale of scholars who are sympathetic to the theology of the Genevan Reformer. It is this chorale approach to the Institutes that will be one of this work’s most enduring contributions. While there are numerous guides to the Institutes, this work represents the first collective offering of its kind. Additionally, this work on the whole represents the kind of Calvin scholarship that Richard Muller recommends in The Unaccommodated Calvin, although some essays follow Muller’s suggestions more closely than others.