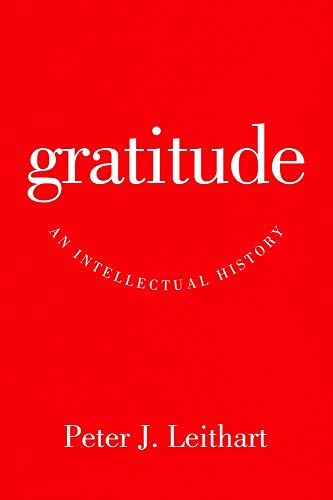 The concept of “the gift” has for many years been discussed and debated in cultural anthropology, philosophy, and theology. Yet, as Peter Leithart notes in his introduction to Gratitude: An Intellectual History, relatively little thought has been given to responses to gifts—specifically, gratitude and ingratitude. Leithart’s book is an elegantly written, intellectually stimulating, and practically helpful attempt to begin filling that hole.

Choosing to define the concept of gratitude very broadly (“Gratitude is the label for a favorable response to a gift or favor, while ingratitude labels an unfavorable response to a gift or favor”), Leithart focuses his history on Western intellectual life. After an introduction providing an overview of the argument, chapters 1–2 focus on the place of gratitude in Greece and Rome. Chapter 3 then offers an account of Jewish and Christian thought on gratitude and ingratitude, followed by a look at medieval Christianity in chapter 4.

The next major section investigates the views of gratitude among the Reformers and other sixteenth- and seventeenth-century thinkers (ch. 5), early modern political and economic theorists (ch. 6), and philosophers (ch. 7). The final section examines the concepts of gift and gratitude as explored in cultural anthropology (ch. 8), the philosophy of Heidegger and Gadamer (ch. 9), and the works of Derrida and Marion (ch. 10). Leithart’s concluding chapter offers a brief summary of his historical survey; an analysis of our current cultural moment; various contemporary attempts to revive and incorporate gratitude into social, economic, and political theory; and a prescriptive call for the Christian church to reappropriate the “infinite circle” of biblical Christian gratitude.

Leithart’s use of the image of a circle and a line to illustrate various approaches to gift and gratitude is very helpful. Ancient Greece and Rome (with notable exceptions such as the political system of Athens) considered gift-giving and gratitude to be circular: the proper response to a gift received was a return gift or favor. Into this context, Christianity introduced a radically God-centered approach that vastly enlarged the circle of gift and response. Jesus and Paul taught that God was the ultimate giver of every gift and therefore, thanks was due to God himself. Placing God at the center of all gift-giving had several major consequences. Jesus’s disciples were to give to others without anticipating a return from those to whom they gave, since they knew God himself would reward them. This freed them to give to those from whom they could not expect a return. Moreover, Christians were not to be beholden to anyone who gave to them; instead of owing favors and allegiance to benefactors, the Christian’s duty was to make good use of gifts received. Leithart nicely summarizes this view of gift and gratitude: “Christian givers impose no debts; Christian recipients acknowledge no debts, except to love” (p. 7). This new teaching undermined Roman society and political life in profound ways and branded Christians as ingrates in the minds of their Roman contemporaries.

One of Leithart’s central arguments is that Western approaches to gift and gratitude subsequent to the NT have drawn on only part of the biblical teaching, thus fracturing the infinite circle of Christian thanks. For example, medieval Christianity valued some aspects of “linear” giving but also retained many aspects of Roman reciprocity. The reformers attempted to restore the biblical idea of grace and gift to a Catholic Church that had largely lost it, but struggled themselves to incorporate the biblical teaching on rewards. Political thinkers in post-Reformation Europe, such as John Locke, sought to build a political theory on the grounds of consent, rather than on relationships based on gifts and gratitude. While Locke’s approach had Christian roots, he adopted only parts of the Christian circle of gratitude and in effect shut God out of his political theory. Similarly, both Enlightenment philosophy and later postmodern philosophers such as Derrida drew upon the “ungrateful” Christian instinct not to be beholden to previous traditions and customs, but took their philosophy in profoundly non-Christian directions. In each instance, the appropriation of only part of the Christian teaching on gratitude resulted in flawed, inadequate approaches.

Leithart ends his book by posing a crucial question. Is there a way to retain the many benefits of modernity’s approach to gift and gratitude, the many blessings of liberal order, while simultaneously resisting its materialist approach and instrumentalizing of human beings? Leithart’s proposal is to return to the “infinite circle” of the biblical teaching, which pushes gratitude into every field of human endeavor and experience, allows humans to sacrifice for others with the knowledge that God will repay them, and balances personalism and freedom. The church must “cultivate habits of ingratitude” (p. 229), giving thanks only to God, refusing to be beholden to others in ways that would compromise the gospel, and returning the Eucharist to its central place in the life of the church and the Christian.

The broad sweep of Leithart’s book has the advantage of allowing him to take a panoramic historical view of gift and gratitude. The drawback is that it doesn’t allow him to linger and probe more deeply in some places where that would be helpful. I would have liked to see some additional interaction with the NT teaching, particularly Paul’s teaching on the sin of ingratitude in Romans 1. Similarly, Leithart’s excellent and thought-provoking prescriptive conclusion, laying out a positive program for the church in restoring Godward gratitude to its central place, could usefully have been expanded. Of course, Leithart himself notes that one goal of this book is to stimulate others to explore this rich and profitable topic. I am (it seems fitting to say) grateful to God for Peter Leithart and his excellent book.

Stephen Witmer is the pastor of Pepperell Christian Fellowship in Pepperell, Massachusetts, is an editorial board member of Themelios, and teaches New Testament at Gordon-Conwell Theological Seminary.