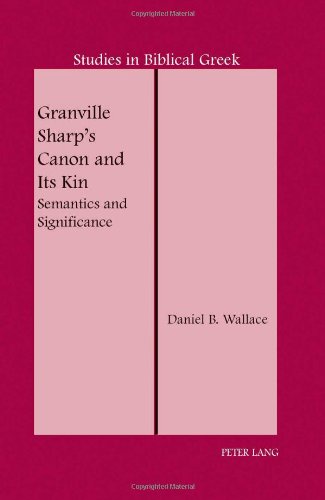 Granville Sharp’s Canon and Its Kin: Semantics and Significance

Rarely is a book on Greek syntax enthralling, let alone immensely significant. Daniel Wallace’s new book on the Greek article is both. The book makes a vigorous argument for the validity of Granville Sharp’s rule, and explores the way in which other TSKS constructions (i.e., article-substantive-κάι-substantive) function that do not fall under the auspices of Sharp’s rule. After his introduction, Wallace deals with these interests in three parts: “Historical Investigation,” “Linguistic-Phenomenological Analysis,” and “Exegetical Implications and Interactions.”

The introduction raises the problem that the book addresses, namely, the nature of constructions “involving a single article that unites two or more substantives joined by the conjunction κάι.… The unity may be, broadly speaking, one of referential identity, overlap, or distinction” (p. 4). The need for the study is fourfold: first, such constructions have a complex semantic range; second, grammarians, exegetes, and theologians are given to making unfounded and erroneous claims about such constructions; third, it is important to clarify the definition of Granville Sharp’s rule, test its validity, and explain its theological implications; and fourth, there are many significant passages that are affected by the meaning of such constructions (pp. 5–7). Wallace also explains the methodology and scope of research.

Part One offers an Historical Investigation, including, in chapter 1, a short biography of Granville Sharp (pp. 31–44)—whom Wallace claims “ought be credited as the force behind Wilberforce, as the ‘father of abolition’ in England” (p. 41)—and the formulation of his rule (pp. 47–54). Chapter 2 canvasses the two centuries of controversy and misunderstanding that followed Sharp’s contribution, culminating in the abuse and neglect of his canon (pp. 55–78). Chapter 3 notes that Sharp’s rule has begun to be noticed again over the last forty years, though only a few scholars have properly understood it (pp. 79–83).

Part Two offers a Linguistic-Phenomenological Analysis, in which all the various types of TSKS constructions are explored—one type for each chapter. In many ways, Part Two forms the heart of the book, and is the most demanding upon the reader. Chapter 5 is the key—and first—chapter of Part Two (pp. 101–33), as it is here that Wallace examines the TSKS construction that Sharp’s rule addresses. This chapter concludes that Sharp was basically correct (pp. 131–33), though Wallace offers a nuanced restatement of the rule in order to buttress it against exceptions:

In native Greek constructions (i.e., not translation Greek), when a single article modifies twosubstantives connected by καί (thus, article-substantive-καί-substantive), when both substantives are (1) singular (both grammatically and semantically), (2) personal, (3) and common nouns (not proper names or ordinals), they have the same referent. This rule, as stated, covers all the so-called exceptions. (p. 132)

Part Three explores the Exegetical Implications and Interactions of the various types of TSKS constructions in the NT. Wallace unfolds these in the opposite order he examines them in Part Two, such that Part Three climaxes with the significance of Sharp’s rule for christologically significant texts (ch. 12; pp. 233–72). The main issue here has to do with whether christologically significant passages fit the requirements for Sharp’s rule (p. 233); since Wallace has already shown the rule to be valid in chapter 5, the passages that qualify affirm the deity of Christ. A significant question addressed here is whether θεός is a proper noun, since proper nouns are excluded from the parameters of the rule (pp. 251–55). After a lengthy discussion, the two passages that qualify are Titus 2:13 and 2 Pet 1:1.

There is much to commend this book. To begin with, who would have supposed that a monograph concerned with a minute issue within Greek syntax could be so enthralling, not to mention theologically significant? The volume is both—and well written to boot. The author writes clearly and with precision, in a way that is generally free of obscure terminology and contorted expression.

The basic argument of the book is compelling, and while there may be an exegetical point here or there over which one may quibble, at no point are the main conclusions compromised. Wallace contends that Granville Sharp was basically correct—when properly understood—and he succeeds in vindicating Sharp in light of his detractors. Wallace helpfully deals with the TSKS constructions that Sharp’s rule does not address, and he provides a nuanced account of what may and may not be said with respect to each of these. Each strand of argumentation is persuasive, though not all exhibit the same flare and significance as the discussions revolving around Sharp’s rule.

Wallace engages in detailed points of exegesis on several occasions in the course of his argumentation, and much of this is helpful. In the course of such exegesis, he mercilessly critiques interlocutors who have either misunderstood Sharp’s rule and/or TSKS constructions or who employ faulty methodology or logic. For example, in his interaction with Gordon Fee regarding Titus 2:13 (pp. 256–64), Wallace deconstructs each element of Fee’s opinion of the verse. On one level, this is presented in a simply matter-of-fact manner, but I doubt Dr Fee will read it that way!

The book successfully contends that certain controversial christological texts explicitly confirm the deity of Christ, and this is due to properly handling their TSKS constructions. To suggest that a subtle element of Greek syntax could lead to such a bold doctrinal conclusion is nothing short of breathtaking, and the case presented to this end is nothing short of magnificent.

With so much to commend, I can offer only insignificant criticisms. In spite of Wallace’s claim to the contrary, the small biography of Granville Sharp (pp. 31–44) is not really needed (not at such length, at least) and does not significantly contribute to the thesis of the book. Nevertheless, it is so interesting that the reader will quickly forgive this indulgence. No doubt Granville Sharp deserves wider recognition than he receives, including for his role in abolition. Furthermore, while Wallace’s thoroughness is commendable, this sometimes goes unrestrained. With footnotes up to nearly a page and a half in length (e.g., pp. 27–28n2), it is unlikely that even the most committed reader will engage with all notes. It is also puzzling that Granville Sharp’s rule is not actually defined until page 50.

And to conclude with the most trifling of criticisms: I have often wondered about the strength of the acronym TSKS. To my knowledge, no explanation of what the ‘T’ stands for in TSKS can be found in Wallace’s famed grammar (Greek Grammar Beyond the Basics). Most students assume it means ‘the,’ which makes sense to a point, but I had not been satisfied by this, since Wallace goes to great lengths to demonstrate that the Greek article does not simply mean ‘the.’ I had wondered if it stood for τό, being the neuter form of the article, but then it was not clear why the neuter would be used. In any case, Wallace answers the question in his new book: ‘T’ stands for ‘the’ after all (p. 7n21). I would humbly suggest, however, that ‘ASKS’ would be a better acronym, with ‘A’ standing for ‘article.’

It is rare to be invited to review a book that is both a landmark and robust to the point of seeming virtually irrefutable. It is a landmark book because it has in my opinion put to rest the debate about Sharp’s rule, and it is enormously important both to Greek syntax and theological exegesis of the NT. Truly, the humble Greek article reaches the heights of the deity of Christ! The book is robust in that it is difficult to imagine its key conclusions being overturned any time soon, if ever. If such claims appear grandiose, the following is more so: this book will stand the test of time as one of the best contributions to Greek syntax of the twenty-first century. Dr Wallace is to be congratulated, and all serious students of the Greek NT should read his book and will do so to great profit.