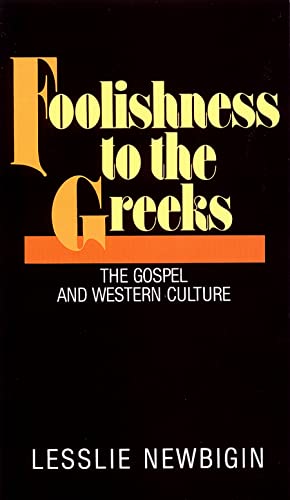 Foolishness to the Greeks

It is heartwarming and deeply encouraging to find that after a lifetime of Christian work as missionary in India, as missiologist in Birmingham, and now as a pastor in Birmingham, Lesslie Newbigin is still thinking fresh thoughts, breaking new ground, making us reexamine our ideas.

I approached the book incautiously. It appeared unpretentious: a slight-looking paperback. In fact I have found it the most profound and possibly even the most important book to come from Lesslie’s never-idle pen. As the sub-title indicates, he is dealing with the relationship between the gospel and western culture.

We have for many years now recognized the problem posed for the gospel by its cultural bias, and so have attempted to contextualize it for its African or Asian setting. But we must now wrestle with the problem of unwrapping our own good news from its western cultural setting. Somehow we must give time to identifying the presuppositions—scientific, economic, political—which inform our society and which find too ready acceptance within our churches, and so distort and even silence the gospel.

Just as the good news has challenged other cultures, so now it must be allowed to challenge ours. Our theory of knowledge, which assumes that a so-called scientific explanation, a mechanistic cause-and-effect explanation with no recourse to the concept of purpose, is sufficient explanation, must be tested. Our political systems which determine what can be done by society to remedy its own ills, must be tested. Are there no genuinely Christian alternatives to the familiar secular panaceas?

Having just come from a day conference of professional theologians, I have found myself responding with unusual warmth to Newbigin’s appeal for a declericalized theology. One is impressed by the versatility, the brilliance, as it would probably be called, of the clerics, and at the same time bored and depressed by the sheer irrelevance to ordinary mortals of what they are doing. This call for the declericalization of theology comes as the third of seven priorities for the confrontation between the church and western culture. The remaining six shall remain anonymous, but they are as relevant and as controversial as number three.

This is not at all an easy book. It is an important book. It is certain to challenge and reward the careful reader. And finally it must be said that it is very much to be hoped that Bishop Newbigin will be willing to be persuaded to exempt himself from his own process of declericalizing theology: the loss of writing such as this would impoverish us all.