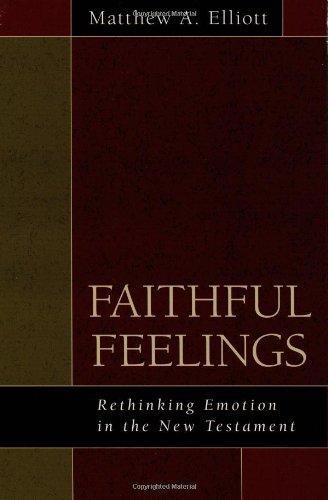 The book is an attempt to apply modern studies dealing with emotion to the New Testament. However, it is not primarily about the vocabulary of emotion: anger, love, joy, hope, jealousy, fear and sorrow. Instead, it is about emotion itself, how it was perceived by the writers of the New Testament, and what role they thought it should play in the life of the believer.

The goal of chapter 1, ‘What is Emotion?’ is to look critically at the major theories that attempt to explain emotion, and to discover which viewpoint gives the best working model since a particular approach to emotion has an extensive influence on New Testament studies.

The theories of emotion can be divided into two major viewpoints: cognitive theory and non-cognitive theory. However, the question is not so much about the difference between these two theories, but instead, what is the nature of emotion itself—and therefore, what does the New Testament have to say about what emotion is?

Chapter 2, ‘Emotion in the Greco-Roman World’, attempts to discover, mainly through the writings of the philosophers, what ideas about emotion were present in the New Testament world. It also looks at what general societal responses and attitudes existed in and toward the expression of emotion. By using the basic cognitive and non-cognitive grid, the various philosophical schools are categorized and presented showing even their seemingly uncomplimentary views at times. This chapter concludes by suggesting that although no formally well-articulated theory of emotion may have existed during this period, that does not discount that life nevertheless is impacted by personal ideas of emotion.

Greater attention is given to the Old Testament influences using a broad thematic approach of considering the emotions of the righteous, the wicked, and God by looking at various texts. This leads to a conclusion which suggests that links between emotion and knowledge in the Old Testament cannot be denied. However, it insists that proper emotions result from a knowledge of God, and not simply a knowledge of how to reason.

After dealing with the most common emotion words like love, joy and hope, the author draws helpful conclusions on each while avoiding to create a catalogue of their precise meanings. Instead, he aims to place these words in the place of emotion in the world view of the early church.

In chapter 5, ‘Emotion in the New Testament: Jealousy, Fear, Sorrow and Anger’, Elliott identifies a number of general negative emotion words in the New Testament and traces their typical interpretation. This, he suggests is a flawed non-cognitive approach that is theologically biased. The constant appeal is one toward a cognitive approach to the emotion words in which the emphasis lies on the link between cognition and emotion. At the same time this does not discount the reality of the importance of emotion as a true indicator of the state of the heart.

Chapter 6, ‘Emotion in the New Testament: A Summary Statement’ is the final analysis and a brief summary of thought is presented. This stresses the main ideas and motive behind this work. The appeal is one that centres on the need to recognize the reality of emotion that is communicated through Scripture and the expression of that emotion that is according to the disclosure and subsequent wonder of the truth within Scripture.

This is an excellent study of a neglected subject.