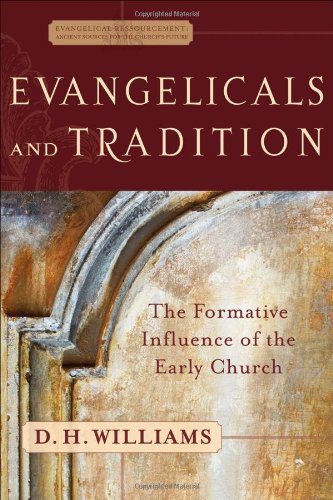 EVANGELICALS AND TRADITION: THE FORMATIVE INFLUENCE OF THE EARLY CHURCH

This study argues that it is the durable character of ‘tradition’ which preserves and defines Christian belief, and that the core of Christian teaching and identity was forged during the patristic era. The wealth of theological, exegetical and spiritual resources generated came to hold a unique canonical status in subsequent ages. Whilst this ‘great tradition’ no longer holds such a status within contemporary evangelicalism, the sixteenth century Reformers were among those who acknowledged its formative influence and saw within it the roots of evangelical faith. The challenge is to rediscover the value of these same patristic resources and the contribution they can make in appropriating the Christian faith for today.

Williams, himself an evangelical, is aware of potential misunderstanding and so he offers us a clear and highly accessible introduction to his thesis Tradition has always been with us because it is the verbal form in which the preaching of the gospel was originally presented and transmitted. It continues to be the vehicle by which the ‘content’ of the Christian faith is communicated and so tradition is inextricably linked to Scripture itself. The link brings together the apostolic and the patristic ages in a way that acknowledges their distinctiveness but challenges out tendency to artificially isolate them. The fathers of the Church were the first to define and live-out gospel faithfulness, so Williams can speak of both the apostolic and the patristic period as being ‘canonical’ in the sense that they give us the fixed norm for determining the parameters of Christian life and thought.

Williams seeks to demonstrate that functional canonicity is not a category of his own making, and finds support in the magisterial Reformers. For example, Luther saw the early Church as modelling a permanent pattern of faithfulness for all future believers. But the Reformers were not indiscriminate in their use of patristic thought, and Williams believes that we should be likeminded in our own approach. Common cause is made with the Reformers to show that the thesis of the book is not a novelty, and this itself should earn Williams a more attentive hearing among his intended readers.

Consideration is given to the relationship between Scripture and tradition. The early fathers rarely appeal to tradition independently of Scripture because it was not conceived of as a source that functioned apart from Scripture. But whereas the fathers were concerned with the divine character and action of God through the text of Scripture, the Reformers came to defend the Bible as the sufficiency of divine revelation by granting supreme authority to the text. Here Williams considers the strengths of the patristic approach, and particular attention is given to the practice of allegorically reading the Scriptures. This approach was not merely a free flight of fancy, as many have caricatured it, but a sincere desire to dig more deeply into the truths of God’s word. Williams does not imply that we should read scripture allegorically, but he is concerned that we often go so far in the opposite direction so as to be hostile to all patristic exegesis.

A clear strength of the book is the reminder that the attempt to articulate our faith should never be separated from the practice of it. We have within the Church’s canonical tradition the resources necessary to meaningfully engage in the theological task without sole recourse to the academy. On this point alone Williams’ thesis should earn a hearing! The book opens to us potential avenues for further study as we are given glimpses of creeds and catecheses, biblical commentaries and ancient hymnody and what re-appropriation of these resources might look like. But this volume being the introduction to a series, we need to wait—expectantly!—for other volumes to see where these avenues will lead.