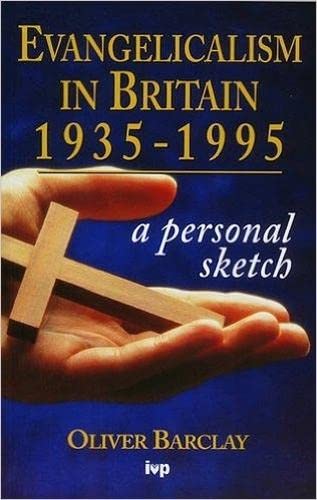 Evangelicalism in Britain 1935–1995 A Personal Sketch

Dr Oliver Barclay, Cambridge zoologist, General Secretary of IVF-UCCF from 1964 to 1980, and now, Evangelical elder statesman, has left us in his debt with this ‘personal sketch’ of Evangelicalism in Britain over the last sixty years. It is important to realize that the book does not claim to be a formal history like Whatever Happened to the Jesus Lane Lot?, his history of CICCU. It is therefore not a criticism of this book to say that it is impressionistic and does not give the kind of comprehensive and analytical treatment which a formal history would require.

The initial chapter asks, ‘Who is an Evangelical?’ To David Bebbington’s four characteristics (conversionism, activism, biblicism and crucicentrism) Oliver Barclay wisely adds Christ-centredness, quoting John Wesley: ‘I offered them Christ.’ He briefly distinguishes conservative or classical Evangelicalism (CE), embodied in IVF-UCCF, from liberal Evangelicalism (LE), embodied in SCM. The focus thereafter is on CE tradition which is traced through six stages in the six succeeding chapters: Pre-war Doldrums, the Crucible of War, New beginnings, (1945–55), Consolidation (1955–70), More Adventure, Less Unity (1970–80), and Adjusting to a Changing Society (1980–95).

Dr Barclay identifies the weaknesses of pre-war Evangelicalism: defensiveness, legalism, anti-intellectualism. He traces the crucial influence of Martyn Lloyd-Jones and (behind the scenes) the first General Secretary of IVF, Douglas Johnson, in beginning to change this ghetto mentality. The new beginnings in the decade after the war are marked by the emergence of new voices (John Stott, William Still, Herbert Carson, Leith Samuel, Norman Anderson, Donald Mackay), the Billy Graham campaigns, and theological gains led by R.V.G. Tasker, F.F. Bruce, J.I. Packer, Donald Wiseman. The fifteen years from 1955–70 (confusingly headed 1995–1997 at the top of each page!) saw opposition ably answered by J.I. Packer, and the beginning of division between the free church Evangelicals led by Lloyd-Jones and Anglican Evangelicals with a new loyalty to the Church of England from the Keele Congress of 1967. A strong Reformed school, a new social concern, and the first appearance of a charismatic wing also marked this period. The latter two were to grow in influence in the decade of the 1970s, which also saw the emergence of hermeneutics as an issue in the theological scene. In the final fifteen year period, 1980–95, Dr Barclay identifies five major changes: an increasing number of Evangelicals, an alarming deficit of biblical knowledge among younger CEs, a growth in Pentecostal and charismatic churches, a lack of long-term commitment in the 1990s generation, and the infiltration of church life by postmodernism.

The value of this book is that it is a personal sketch by someone who was not only at the heart of the Evangelical movement of this period, but also whose sympathies are with Conservative Evangelicalism as a whole and not exclusively with any of its component traditions. From his viewpoint in IVF-UCCF, he was at the heart of the Evangelical renaissance, and yet that does not mean he saw everything! Despite the attempt to review the whole church scene and the inclusion of regular sections on Scotland, Wales and Ireland, the view point is from the universities and from the south of England. That leads to some omissions—the work of the Salvation Army, the significant evangelistic influence of J.W. Meiklejohn and the SU camps in Scotland, the preaching of Campbell Morgan and W.E. Sangster, and the influence of Spring Harvest to name a few. The work of the city missions and working class Evangelicalism in general are only mentioned. The evaluation of Evangelical theological education in the final fifteen year period is also rather generalised and impressionistic. Certainly, if the Evangelical colleges have simply adopted the rationalistic reductionism of much university teaching of theology, and have allowed theology to become divorced from ministry and spiritual life (‘Lectures are very rarely heart-warming’), that would be very worrying.

But we must not demand that a ‘personal sketch’ be an academic and analytical history. Dr Barclay has provided us with a valuable account which future historians of Evangelicalism will treasure and which every theological student should read.