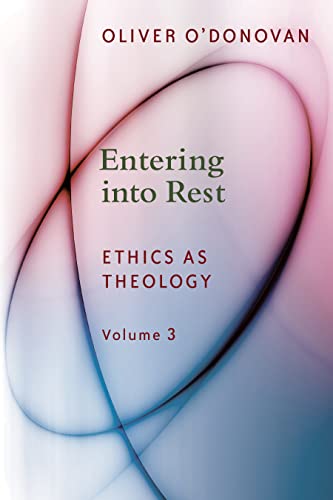 Entering into Rest is the third and final volume of Oliver O’Donovan’s seminal Ethics as Theology trilogy. It is in my estimation the best of the three. I say “best” with a proviso, however, because I think the editorial decision to make Ethics as Theology a trilogy in some way disrupts the integrity of the work as a whole. Entering into Rest is better read as the culmination of the preceding two volumes, and perhaps also of a scholarly career. As such, it represents a sagacious, original contribution to Christian theological ethics. Before remarking on the substance and efficacy of Entering into Rest, a brief reminder of what the first two volumes set out to accomplish.

In Self, World, and Time (volume one), O’Donovan addresses “the study of Ethics itself as an ordered reflection on moral thinking and on its place within the life of faith” (p. vii). I describe it as a mapping book. It sets the trajectory. In Finding and Seeking (volume two), O’Donovan shifts from the study of thinking to thinking itself, exploring “its progress from the original consciousness of agency, to the world as the structure of value, and to the time that determines the moment of decision” (p. vii). With this final volume, the exploration turns “from the progress of moral thinking to its object, the forward horizon with which moral thinking engages.” Moral experience is “two-directional”: consciousness of responsibility, on the one hand, and goals to be pursued on the other. Ethics describes a way of thinking, a thinking toward action.

This is not an especially fashionable line of inquiry in Christian ethics today. The discipline has had other preoccupations. It has certainly disfavored the Kantian legacy. This overreaction has in turn fostered neglect of some otherwise longstanding moral concepts. But knocking the dust off moral reason doesn’t make one a rationalist. In fact, O’Donovan repudiates the whole tendency toward “methodological monism.” Christian ethics isn’t reducible to a virtue ethics, command ethics, or love ethic. As he puts it, “the last thing that could benefit theological ethics at this point would be another reduction of the moral message of the Christian gospel to a single word” (p. viii). A holistic ethics will therefore draw from the whole of the Christian theological tradition, especially the holy scriptures. Readers will be pleasantly surprised to discover that references in the Scripture index outnumber sources in the index proper, and even here sources are drawn from across the tradition!

The trilogy began by reasserting the relevance of the theological virtues, and here with Entering into Rest we arrive finally at “the greatest of these,” love. “The sequence in which faith is followed by love, and love by hope, reaches its conclusion in action,” states O’Donovan (p. 1). Theological virtues represent the shape of the Christian life itself—baptism, church membership, and endurance.” In Finding and Seeking these Trinitarian coordinates mapped onto “responsibility, attention to the world, and deliberation.” The trilogy has always been about the shape of the Christian moral life. But what did Paul mean, asks O’Donovan, by giving love special priority?

Love is the end of action. “Resting” is what agents do when satisfying ends. This rest comes through active accomplishment and is eschatologically conceived. Paul’s Corinthian correspondence is taken as emblematic in this respect, where questions he faces draw him to two “converging lines”: the life of the church, and the expectation of the end. Love describes the point of their intersection. In 1 Corinthians 13 love is also characterized in various ways as deferential. “Negative or positive,” claims O’Donovan, “these features of love move around a well-described circle: restraint of competitive self-assertion, acceptance of others’ activities and initiatives, flexibility in waiting upon them, and readiness to give them time and space” (p. 2). Later he describes this as resting in others’ labors. Notice, then, when love is relocated to the summit of the triad, “it is a statement about the finality of community.” A Christian theological ethics must have love as its end, acknowledging the Kingdom “drawing-near” and suffusing the church with joy. As O’Donovan puts it, the logic of Paul’s triad is a logic of salvation and eschatology (p. 4).

Practical reason therefore has an “eschatological extension” and “ecclesiological orientation.” Following Augustine, O’Donovan suggests community constitutes the essential content of moral reason. Community is a moral purpose of agency. Love is to rule God’s people, and its sovereignty is “bound up with the bestowal of the Holy Spirit, the decisive pledge within history of our last end” (p. 9). The love O’Donovan has in mind goes by a special name: devotion, “the love that rests in its object and is wholly fulfilled in it” (p. 14).

All this emphasis on the authority and order of love, and yet Entering is disproportionately occupied with the Church and its “communications.” Membership in the faith community makes a claim upon us. Here “our works are to be part of the whole,” works that aren’t ours or some else’s, “but God’s, working within his redeemed creation” (p. 19). A people neither independent nor dependent, but interdependent. We are given to one another for communicative love, a sharing in and of the good. The church is a community for the common good. To this end, O’Donovan appends several theses about the scope of practical reason and set scope for chapters to come.

The chapters that follow are exquisitely argued, full of moral clarity and pastoral wisdom. Each expands in its own way upon the love’s discreet sovereignty; how we are together, who we are for, and in what we share. The church as a community rests in the love of God, a gift of the Holy Spirit. As O’Donovan notes, “Ethics after Pentecost … concerns what transpires between love and love, between reflection and reflection” (p. 228). The first reflection takes in all that the world displays to us in its meaning; the second takes that meaning in again as “a theatre in which God has finally worked his purpose, and will disclose it fully, a scene on which our gaze may rest with praise and thanksgiving” p. 229). Devotion is the mode of our participation, where the clarity of our knowledge and impulse of our energy are one, and is thus a necessary love for sanctification.

I have come lately to describe O’Donovan’s trilogy as sort of phenomenology of discipleship. It points to that which is finished and unfinished. It reasserts the theological truth about human belief, commitment, and agency. It tells of God’s love. It evokes. It extols. As has become characteristic of O’Donovan’s corpus, it poses decisive questions and reframes terms of theological discourse. Entering into Rest brings to conclusion perhaps the most magisterial work in Christian theological ethics of the last half century. Whether it may also hint at the resting of a scholarly career is yet to be seen. I pray not yet!