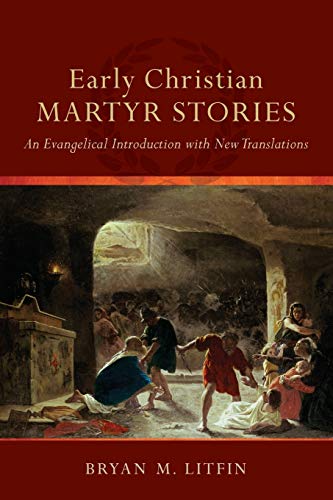 Bryan Litfin, a professor of Theology at Moody Bible Institute, has created a helpful introduction to the phenomenon of martyrdom that would be suitable as an undergraduate text. The bulk of Early Christian Martyr Stories is Litfin’s fresh translation of several key primary sources that provide evidence for the martyrdom phenomenon. He prefaces each of these translations with a brief introduction explaining the context of the source. He also provides helpful historical notes on the sources.

Litfin provides his reader with a chronological survey of the martyrdom phenomenon in a brief 175 pages. He begins with what he calls the Jewish martyrs from 2 Maccabees, who died in the 160s BC, and he ends with a sermon that Augustine of Hippo preached in the fifth century AD that shows martyrdom’s legacy. Along the way, Litfin introduces his reader to some of the most famous martyrs from the early church: Ignatius, Polycarp, Justin, the martyrs of Lyons, the Scillitan martyrs, Perpetua, and some of the martyrs of Diocletian’s Great Persecution.

Litfin also includes other documents that illuminate the martyrdom phenomenon. He provides excerpts from Tertullian’s To the Martyrs and Apology; it is in the Apology that Tertullian coins the idea that the blood of the martyrs is the seed of the church. Litfin also includes an excerpt from Origen’s Encouragement to Martyrdom. These texts show some of the meanings that early Christians imputed to martyrdom. He even includes sources on the triumph of Constantine that signaled the end of persecution.

Litfin unapologetically writes from an evangelical perspective, and this perspective causes him to gently critique his sources at times. He reminds his reader that ransom theories of the atonement were common in the early church, but he rejects them. He also critiques Tertullian and Origen’s tendency to see a martyr’s blood as atoning for sin, though he confesses great admiration for their writings as a whole.

The translations in Early Christian Martyr Stories make the texts accessible for the average reader. Litfin has rendered the Latin and Greek into easy-to-read English, but some readers might find Litfin’s style too colloquial. For example, in his translation of Polycarp’s martyrdom, Quintus “took one look at the beasts and chickened out” (p. 57). Litfin’s introductions err on the side of informality as well. He describes Christianity and Paganism as gunfighters in a western movie saying, “This town ain’t big enough for the both of us” (p. 7), which might be colorful imagery, but it is not very helpful. Litfin himself admits that persecution was sporadic and localized, which means that in most cases a town was plenty big enough for both Paganism and Christianity. He also peppers his introductions with exclamation points and rhetorical questions of a devotional nature.

Even though this is an introductory text, I was surprised at some of the issues that Litfin dodges. I expected to see more discussion of what martyrdom actually is and where it came from. Litfin does not acknowledge that his choice to begin the book with 2 Maccabees is somewhat controversial. By beginning the book with the Maccabean martyrs, Litfin implies that martyrdom is a continuation of old covenant piety, but scholars have argued about the roots of martyrdom for decades. Some scholars have denied the Jewish roots of the martyrdom phenomenon, suggesting that it is a manifestation of Roman ideals concerning noble death. Others have suggested that martyrdom is a uniquely Christian experience. Some third and fourth century bishops compared the Maccabean stories to Christian martyrdom, but similarity does not entail dependence.

Litfin follows his controversial first chapter with an interesting choice for his second chapter. In order to get from Maccabees to the more traditional stories of Ignatius and Polycarp, he includes excerpts from the Acts of Peter and the Acts of Paul. Litfin, however, admits that these somewhat heterodox sources were composed in the second century. If anything the letters of Ignatius and the Martyrdom of Polycarp influenced the creation of these texts, rather than the other way round.

I also found it surprising that Litfin chose not to engage the difficult subject of voluntary martyrdom. Litfin leaves out the most notable examples of Christians killing themselves in the name of Christ, and even when the included sources hint at voluntary martyrdom, he passes over it without comment. It seems that Litfin does not want to give his reader an opportunity to criticize the martyrs. Indeed, he continually describes them as “spirit-filled” and “grace-filled.”

On the whole, this book would make a good introduction to the topic of martyrdom for an undergraduate course on church history. However, students who want to dig deeper into the primary sources concerning martyrdom will still need to track down a copy of Herbert Musurillo’s Acts of the Christian Martyrs (Oxford: Clarendon Press, 1972). Musurillo offers twenty-eight of the earliest primary sources on martyrdom and includes discussions on context and transmission.