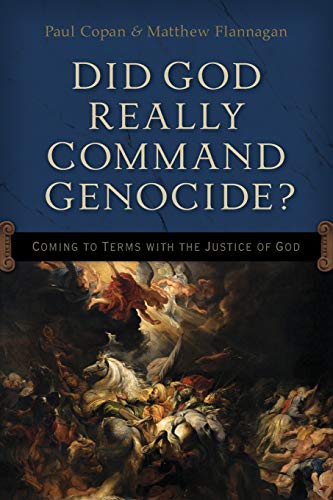 Did God Really Command Genocide? Coming to Terms with the Justice of God

With the full, undeniable emergence of radical, militant Islam in the past decade, responses to the jihad of the movement have proliferated, especially within evangelical scholarship. The reason for this interest in the evangelical community is the apparent similarities between so-called “Holy War” (or “Yahweh War”) in the Bible and its expression in the Quran and ancillary Islamic literature and traditions, notably the Hadith. This matter of the similarities and differences between these two traditions is essential to the program of the present book. In addition to a full chapter devoted specifically to the matter (pp. 276–87), Paul Copan and Matthew Flannagan carefully build a case for the uniqueness of Old Testament “Holy War” and thus prepare the way for outlining the contrasts between the biblical and Quranic presentations of the issues.

The technical nominal term for the concept in the Old Testament is חֵרֶם, “ban, what is banned” (HALOT 1:354). The associated verb is חרם, always in the causative Hiphil הַחֲרֵם (or passive הֶחֳרַם), “put under the ban, dedicate something (to Yahweh).” The corresponding Arabic lexeme jihad comes closest conceptually to the Hebrew; however, not only semiotically but semantically there is a wide range of difference between the two. For example, whereas jihad speaks of both inner spiritual struggle toward the ideals of Quranic life and practice, as well as offensive warfare against all unbelievers (i.e., non-Muslims), חֵרֶם refers only to the militant, pro-active commands of Yahweh to single out his irredeemable, implacable enemies for annihilation. Moreover, חֵרֶם was limited to only one historical era, that of the conquest of Canaan under Joshua as instructed by Yahweh through Moses. Jihad, it is argued, is not time-bound but must remain as a hallmark of Muslim identity until the whole world is either converted to the faith or destroyed because of failure to comply and become part of the Umma, or universal caliphate.

For the modern Christian, not only is the practice of violent jihad abhorrent on its face, but it runs counter to every code of ethics and morality expected of civilized society. That said, what about OT חֵרֶם? How can that be justified in accord with these same standards? This is the conundrum addressed in this book and the central theme to which the authors have offered response (pp. 10, 37–38, 204–206, 237–240, 267–269). Paul Copan, Professor of Philosophy and Ethics at Palm Beach Atlantic University in Florida, has engaged this issue in a number of publications, including Is God a Moral Monster? Making Sense of the Old Testament God (Grand Rapids: Baker Books, 2011) and Holy War in the Bible: Christian Morality and an Old Testament Problem (Downers Grove, IL: InterVarsity Press, 2013). Matthew Flannagan is an independent scholar in Auckland, NZ. Much of his research on the subject at hand can be found in a number of essays and periodical publications. Their collaboration here has resulted in a breathtaking and comprehensive analysis of the profound moral and theological implications of viewing God as not merely passive in the face of annihilistic atrocities, such as the indiscriminate slaughter of innocent women and children, but as the ultimate inspiration for devising, commanding, and successfully implementing what appears unconscionable and morally reprehensible from a human perspective.

The twenty-three chapters of the book are divided into four categories: (1) Genocidal Texts and the Problem of Scriptural Authority; (2) Occasional Commands, Hyperbolic Texts, and Genocidal Massacres; (3) Is It Always Wrong to Kill Innocent People?; and (4) Religion and Violence. After mounting a solid defense of the Bible’s dependability (though one overly dependent on discourse analysis), the authors disappointingly undercut their own arguments for biblical inerrancy in a number of ways.

First, they propose that it is possible that “what God says by way of appropriating the biblical text as his Word is not the same as what the human author of the text says” (p. 51). This seems to drive a wedge between the utterances of God and those of the human instruments whom he inspired, and it strongly suggests that the biblical writings originated with the prophets and were either approved or disapproved by God. It follows that humans may have instigated policies such as genocide over the objections of God or in contradiction to how he really felt.

Second, to soften the impact of God apparently commanding genocide, the authors propose that what is meant is not slaughter but expulsion from the land (pp. 76–81). But a careful and sensitive reading of the conquest narratives cannot legitimize this way of “rescuing” God from the plain reading of the text.

Third, just as troubling is the “hyperbolic interpretation of Joshua” (pp. 84–90). By this is meant primarily that “all” does not mean “all” when it comes to the removal of the Canaanites. The argument that annihilation could not be meant literally because Canaanites still remained alive is vacuous, since the fact the command was given to kill “all” need not mean that Joshua and the Israelites complied fully with the command, but in fact disobeyed the command as was their policy more often than not. Referring to the book of Joshua as “hagiographic and highly hyperbolic” (p. 107) raises the dilemma of how such propaganda is believable, much less authoritative.

The work is rounded off by an excellent elaboration of the “Euthyphro dilemma” that wrestles with the question of whether God commands a matter because it is good or it is good because he has commanded it (pp. 171–84). The view embraced here is the latter, a correct conclusion in our view. Other important questions are handled with great care and convincing solutions. These include: (1) Can one claim that God commanded the death of innocents?; (2) What if someone today claimed that God commanded the slaughter of the innocent?; (3) Does religion cause violence?; and (4) Are Yahweh wars in the Old Testament the same as Islamic jihad? The answer to (4), and with many comparisons and differences, is No! (pp. 276–85). As for question (1), the authors argue (unsuccessfully in our opinion) that innocents were not slaughtered because they left the land and only the wicked men of war were thus subject to destruction (pp. 220–24). Question (2) is well-addressed by the point that the closing of the biblical canon precludes the kind of divine revelation that could be certifiably authentic enough to warrant a modern justification for slaughter of the innocent (pp. 237–40). The response to (3) is that no case can be made historically to show that this is the case and that, in fact, religion has been an ameliorating factor that has prevented these very atrocities (pp. 274–75).

For a compelling and informative treatment of biblical ethics in view of the conquest and other “questionable” undertakings, go no further than this. Even with its drawbacks, Copan and Flannagan’s contribution is easily the most important work on the subject currently available.