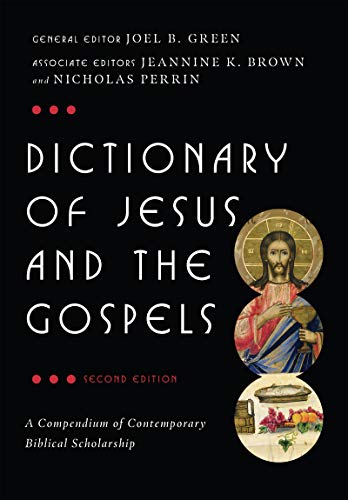 Dictionary of Jesus and the Gospels

In several respects this dictionary is an improvement upon Hasting’s Dictionary of Christ and the Gospels. Instead of exhausting readers with a list of articles on every possible word or theme which might occur in the gospels or in gospel studies, this work allows smaller issues to be subsumed into larger frameworks. For instance, you will not find an article on ‘anger’ (as you would in Hasting’s dictionary), but you find it discussed under a more comprehensive heading such as ‘The Ethics of Jesus’. In total there are 174 articles.

This dictionary is also an improvement because it lists (1) new subject headings which reflect more contemporary interests (e.g. ‘Anti-Semitism’, ‘Chreia/Aphorism’, ‘Divine Man/Theios Aner’, ‘Q’, ‘Rhetorical Criticism’, ‘Sociological Approaches to the Gospels’) and (2) bibliographies for each article so that students who have read a good introduction will not become frustrated by not knowing where to go next.

An international selection of evangelical scholars is responsible for the articles which help to make the dictionary successful. Rainer Riesner (‘Archaeology and Geography’) discusses the contribution which archaeological discoveries have made upon gospel studies. He details what is known about some of the places which are mentioned in the gospels and he highlights the significance of what geographical details might indicate about where a particular gospel was written. There is a good discussion by Robert Guelich about the destruction of Jerusalem, although it would have been helpful if he had given some better indication as to what are some of the debated issues involved in this subject. An article on ‘Hellenism’ by Ruth Edwards also provides some good general background information, but unfortunately gives little comment on the contribution made by Martin Hengel’s important work on the early influence of Hellenism in Palestine. I found Robert Banks’ article on ‘Narrative Exegesis’ enticing, but I was somewhat dissatisfied that he did not have a clear example of what a ‘narrative exegesis’ does to a narrative. Nor does he explain why narrative exegetes would argue that this method be used in preference to any other method of exegesis.

Three excellent articles which readers should become familiar with are ‘Dead Sea Scrolls’ by Michael Wise, ‘Quest for the Historical Jesus’ by Colin Brown and ‘Gospel-Historical Reliability’ by C.L. Blomberg. What is disappointing about the dictionary in general is that there is not a single map or illustration. Occasionally a chart or two pops up but that is all. Hopefully the demand for the dictionary will result in subsequent editions supplying this need.