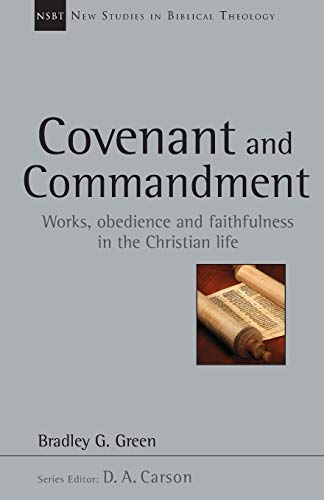 Covenant and Commandment: Works, Obedience and Faithfulness in the Christian Life

Bradley Green is Associate Professor of Christian Thought and Tradition at Union University (Jackson, Tennessee). In this book, he advances the following thesis: “in the new covenant, works are a God-elicited and necessary part of the life of the converted person” (p. 17, emphasis original). Christian obedience “is not a perfect obedience or perfect law-keeping, but it is real obedience, an obedience that (1) flows from the cross, (2) is a partial fulfillment of the promised blessings of the new covenant (e.g., from Jer 31:31–34; Ezek 36:26–27), and (3) is sovereignly and graciously elicited by the God of holy Scripture (e.g., Phil 2:12–13)” (p. 19, emphasis original).

Green argues for his thesis across seven chapters. Chapter 1 surveys NT passages that present the centrality of works, obedience, and faithfulness in the life of the Christian. Chapter 2 provides the biblical backdrop that makes sense of the data in the first chapter. Chapter 2 focuses on key OT texts, particularly Ezekiel 36:26–28 and Jeremiah 31:31–34, which speak of a future day when Spirit-induced, God-wrought obedience from the heart will characterize God’s new covenant people, and NT texts which affirm that the new covenant as presented by Jeremiah and Ezekiel is a first century reality producing this promised heart-obedience.

Chapter 3 addresses key biblical-theological issues connected with continuity and discontinuity across the canon, and argues that works, obedience and faithfulness are essential components of the believer’s life in both Testaments. Chapter 4 examines the relationship between the atonement and works, obedience, and faithfulness, and presents Christ’s cross-work as the ground of human transformation. On a similar note, ch. 5 addresses union with Christ, and argues that while faith alone unites believers to Christ, good works are the inevitable result of Christ being formed in them.

Chapter 6, the longest in the book, addresses the interlocking issues of future justification and judgment according to works. Green states his position clearly: while initial justification is by faith alone, there is a future aspect of justification in which good works will be evaluated as proof of the believer’s faith. These good works do not play a causative role in justification, but they do play a declarative role (for a good summary of Green’s position as it relates to Jas 2, see the summative paragraph on p. 113). Chapter 7, the final chapter, directly addresses certain themes broached throughout the study: (1) the nature of the covenant in Eden, and humanity’s relationship to Adam and his transgression; (2) the relationship between Christ’s obedience and Christian obedience; and (3) inaugurated eschatology.

Green writes clearly, and bases his argument solidly on Scripture. Each chapter surveys several biblical texts connected with the particular chapter’s main idea, and interacts with historical and contemporary figures who advance similar theses. Green also charitably interacts with N. T. Wright on future justification, challenging his statements which appear to ground future justification in works (rather than viewing works as declarative of a justified status).

Green focuses on his main thesis, and doesn’t get sidetracked by related discussions (such as Paul and the law, and the nature and reality of imputation). Green acknowledges his position on these (he favors the old perspective), but focuses on the debate at hand. In doing so, he helpfully addresses such relevant issues as the nature of sanctification and Christian living, the law-gospel paradigm, and Protestant-Roman Catholic debates on the nature of justification. The book’s thesis even addresses (though not directly) the old lordship-salvation debate.

I agree with Green’s main thesis, and enjoyed his careful attention to scripture and theology. Allow me to note only two weaknesses. First, Green doesn’t make his hermeneutical position clear until ch. 7, and even then he is not explicit (I believe Green follows New Covenant Theology as opposed to Covenant Theology or Dispensationalism). While Green’s thesis is compatible with all three systems, it’s nice to know which position an author holds.

Second, Green is light on polemics, despite the disputed nature of his thesis and the many areas of Christian thought it addresses. Green argues for justification by faith alone specifically, and the necessity of works for salvation generally, but does not show how this answers the Roman Catholic charge that justification by faith alone produces antinomianism. Green argues that works, obedience, and faithfulness are a necessary component of the Christian life, but does not directly challenge writers who argue the opposite.

In fact, Green is the most polemical when challenging covenant theologians and their concept of the covenant of works (full disclosure: I am a covenant theologian). He suggests that such a scheme runs the risk of placing works in a realm of merit where they play little or no meaningful part in the life of the Christian (see pp. 152, 156–57). I would suggest this is a non sequitur, as covenant theologians have shown no aversion to affirming the necessity of works, obedience, and faithfulness in the life of the Christian. These are minor weaknesses, however, and do not detract from the strength of Green’s thesis and methodology. I heartily recommend the book as a comprehensive presentation of the key biblical texts and ideas affirming the necessity of good works for believers.