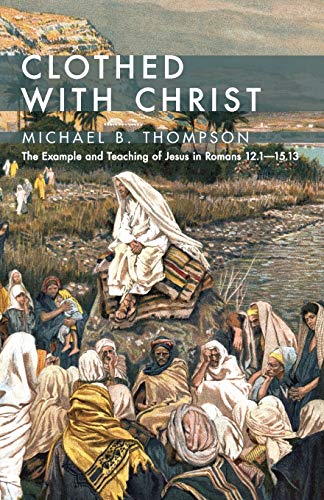 Paul’s use of the Jesus tradition in his epistles has been a matter of some debate in NT research for many years. Although Michael Thompson’s recent monograph does not claim to ‘solve’ the question, he certainly makes a significant contribution to the debate, and the modest goals he sets for himself are successfully achieved. Thompson seeks to advance research in three areas by: establishing some basic criteria for evaluating proposed ‘allusions’ to Jesus’ teachings in Paul; proposing some realistic expectations for Paul, given that he knew the Jesus tradition; and examining the ethical instructions of Paul in Romans 12:1–15:13 with a view to identifying possible allusions to the Jesus tradition. Although the bulk of the book is taken up with a detailed exegetical consideration of the latter section of Romans, the scope of the book is much wider, with the Roman material providing a test case for identifying the Jesus tradition in Paul. Thompson begins by identifying the two main positions in the debate, that of the maximalist and the minimalist, who respectively see either an enormous number of references to Jesus in Paul’s writings or absolutely none. In response, Thompson artfully steers a middle course between these two exaggerated positions to provide the reader with a well-balanced, well-argued thesis that Paul not only knew of the Jesus tradition but subtly used it when it suited his purpose in his letters.

Part II of the book is given to a detailed exegesis of Romans 12:1–15:13. The choice of Romans as a test case is particularly apt as the apostle had not visited the city at the time of writing, thus making it more likely that he ‘is appealing to teaching he knows is familiar to the Romans’ (p. 137). Thompson’s handling of the secondary literature is impressive, as is his ability to evaluate it and make independent judgments, where necessary. Yet there is a humility in his approach, as he never presses his case too hard. He handles the evidence judiciously and displays a commonsense approach in his understanding of the text, and a patient consideration of possible objections. One might quibble with some of the author’s judgments; however, on the whole it should be conceded that he has established his case that despite the paucity of allusion to the Jesus tradition in Romans 12:1–15:13 (he finds only one probable allusion, three virtually certain echoes and several probable echoes), it is clear that the dominical teachings significantly influenced Paul. Conformity to the person of Christ was Paul’s goal for himself and his readers, and both the example and the teachings of Jesus played their part in Paul’s ethical instruction. ‘Paul is painting a portrait of Christian behaviour for the Romans, and the face on the canvas is that of Jesus’ (p. 140).