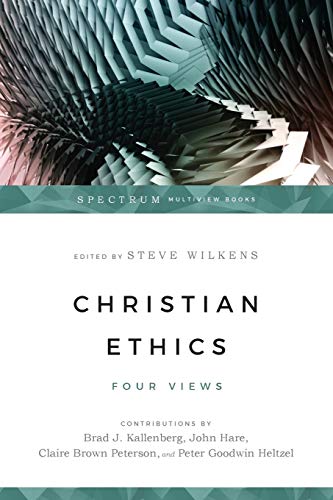 The application of Christian ethics is a primary concern in contemporary debates, however theoretical discussions are often significantly absent. When dialogue about ethical schema occur, they are often difficult for those without significant training to understand. This recent volume from IVP Academic provides lucid and accessible presentations of four common approaches to ethics, which are, in this case, framed as being consistent with Christianity.

The volume opens with an introduction that outlines the scope of the book and briefly describes the four views presented. Brad Kallenberg, professor of theology and ethics at the University of Dayton (OH), opens the argument by presenting his version of virtue ethics. He outlines his understanding of the positive qualities of an ethics of virtue, drawing largely from Aquinas and heartily illustrated with passages from Scripture. The emphasis on character formation is healthy, as is his insistence on developing a “thick” perspective of virtue, which helps prevent the abuse of so-called virtue to justify vicious actions. Kallenberg also wrestles with the inherent subjectivity of virtue ethics, which leads to apparently opposite behaviors by different people in similar situations. Kallenberg’s presentation is robust and articulate.

Following the various critiques offered by the other authors, Claire Brown Peterson, associate professor of philosophy at Asbury University, offers her interpretation of natural law. Notably, Peterson also builds on Aquinas, using his paradigm for the overlapping domains of laws to show how natural law is broadly applicable and largely demonstrable across civilizations over human history. Like Aquinas, Peterson gives significant credit to the human ability to rightly derive moral norms from natural inputs, and sees illustrations of this in Scripture.

of prophetic ethics which is a flexible morality that the advocate argues “discerns and partners with the Holy Spirit’s movement in our world, transforming lives and communities, witnessing to Christ and the kingdom, and holding out hope for the restoration of God’s good creation.” (p. 165) Peter Goodwin Heltzel is professor of systematic theology at New York Theological Seminary, whose methodology reflects a desire to connect with the popular movements of the day to eradicate what are, often, real and obvious failures in society. Taking a page from various theologies of liberation, Heltzel’s ethics are prophetic in that they are intended to speak on behalf of marginalized communities to inculcate social justice. Kallenberg’s rebuttal is especially helpful here as it applauds the motivation to fight injustice that may come from prophetic ethics, but notes there is no foundation for those who adhere to prophetic ethics to argue from. This is clearly illustrated by the failure to define social justice apart from being against the powerful for the weak, which can itself turn into a form of oppression.

As with other multi-view books, this volume includes a presentation of the position with interactions by the scholars with opposing positions. On the one hand, this helps ensure the presentation is fairly even-handed. On the other hand, the approach tends to leave the reader wondering which view is, in fact, preferable or even acceptable for a Christian to hold. Such books are useful primarily as heuristic tools for those seeking to understand the breadth of a discipline. The presentations in this volume are helpful toward that end and the critical dialogues demonstrate the points of contention, along with the many points of agreement.

Each of the four positions in this volume is representative of common streams of ethics. However, the methodologies for them are not distinctly Christian, but are simply recognized philosophical frameworks that happen to be shaped by a degree of connection to the Christian tradition. Absent from the list of offerings are ethics that begin with Scripture as the norma normans and then reason outward. Some may think Hare’s essay on divine command ethics meets that intent, but there is little reference to exegesis, hermeneutics, or extensive application. Additionally, the volume ignores various Christian approaches to ethics within the evangelical tradition, such as the triperspectivalism found in John Frame’s work (especially Doctrine of the Christian Life [Phillipsburg, NJ: P&R, 2008]) or the similar schema in David W. Jones (An Introduction to Biblical Ethics [Nashville: B&H Academic, 2013]).

A proper Christian ethics should begin with orthodox doctrines and ask how those should be lived out by the believer in various contexts so that the conduct, character, and goals of the believer best align with the God’s self-revelation in Scripture, which is the task of Christian ethics. The Bible is not merely a sourcebook for ethical reasoning, but an interconnected historical account of God’s work in this world. Beginning with Scripture is essential for Christian ethics, as the faithful seek to be holy as God himself is holy. This volume lacks that perspective, but is a helpful introduction to common approaches to ethics that are often associated with the Christian tradition. As such, Christian Ethics, makes a contribution to the discussion and may be useful in the classroom in some cases.