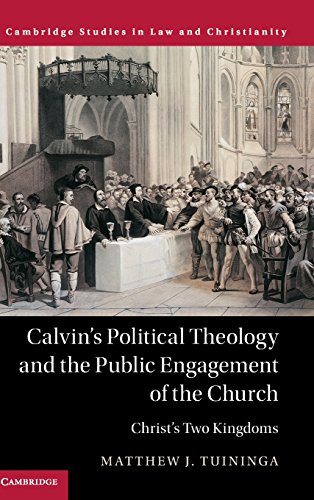 Calvin’s Political Theology and the Public Engagement of the Church

The combined religious and political shifts in the United States over recent years have led to a fair amount of soul-searching among Christians who find that their models of political engagement appear no longer to provide a coherent framework. This eclipse of any sense of consensus around biblical morality leaves many followers of Jesus wondering how to serve as an ambassador of Jesus Christ in a post-Christian society. Whereas during the era of Christendom the State might have seemed to be a partner in preparing the way for the Gospel, imagining such a relationship today comes at best with far weaker expectations and is at worst an exercise in nostalgia. This apparently new environment in the West has led some Christians to argue that the tradition’s resources for understanding the relation between Church and State are no longer helpful. The question is now asked with greater urgency: what is the shape of Christian political engagement?

Matthew Tuininga’s Calvin’s Political Theology and the Public Engagement of the Church is a meticulously researched and carefully argued answer to this query. In the thought of John Calvin, Tuininga identifies a number of resources in the Genevan Reformer’s thought that are not only of significant historical interest for Calvin scholars but that also can continue to guide men and women trying to live faithfully in the time between Christ’s first and second Advent. Calvin’s understanding of the relation between Church and State, his careful deployment of covenant theology, his restrained use of natural law, and above all his unique two kingdoms doctrine together provide an example that, with some development, can demonstrate a path forward for Christians today. Perhaps most significantly, Tuininga argues that Calvin’s political theology, far from being held prisoner within the restraints of his own age, provides particular resources of living within a contemporary liberal democracy: “[Calvin] offers us the theological resources to reject the ideal of Christendom, in which all citizens are expected to worship and live as Christians, on the one hand, and to affirm the value of political liberalism and principled Christian participation in pluralistic democratic societies, on the other” (p. 1).

Tuininga, assistant professor of moral theology at Calvin Theology Seminary, begins by placing Calvin’s thought within the context of the tradition and his contemporaries with respect to the relation of the earthly, political kingdom and Christ’s divine kingdom. In remarkable contrast with nearly every other major Reformer—Luther, Zwingli, Karlstadt, Bullinger, and Bucer—Calvin argued for the relative autonomy of the church from the authority of the magistrate. Calvin’s convictions here distinguished him from figures such as Zwingli, who argued that, according to the Old Testament example of Israel, under Christian magistrates the offices of elder and deacon were no longer needed. Calvin, on the other hand, consistently argued for the independence of ecclesial authority from the magistrate. Calvin’s judgments here, while certainly bearing the marks of the world of Christendom, are distinct within his own Reformation contemporaries.

The book’s argument then turns to a description of Calvin’s understanding of the two kingdoms. Tuininga argues that the doctrine that unlocks Calvin’s particular articulation of the two kingdoms is his eschatology. Specifically, Christians are to live out the tension between the two kingdoms as those who live in the establishment, but not the consummation, of Christ’s kingdom. Calvin marks out a description of the space between these two kingdoms by way of a cluster of doctrines, including a full-throated defense of restoration of the created order and an appeal to natural law. Tuininga convincingly argues that for Calvin obedience in the two kingdoms is not a flight from or spiritualization of the created order but rather a life of hope that strains toward the promised new creation, even while simultaneously expecting that faithfulness within the constraints of the present age will lead inevitably to suffering and tempered expectations.

In his discussion of the two kingdoms, Tuininga identifies the ways in which Calvin distinguishes between the ends of the political order and the spiritual kingdom. Here Calvin’s thought is helpfully contextualized within its aforementioned eschatological tenor, its Reformation concerns (particularly the doctrine of Christian liberty), and proper expectations about what might be accomplished by the authorities of each kingdom. This discussion segues into a chapter on the nature of the Church’s government and how Christian ministry participates in Christ’s spiritual kingdom. The ministry of Word, Sacrament, and discipline is the essential means by which Christ’s Kingdom is administered in the world. Christ’s reign, Calvin states, is also exercised through the political order but primarily in the restraint of evil. Interestingly, Calvin both advocated for the involvement of Christians in political service and also rejected the idea that the Mosaic law was normative for Christian politics.

The ways that Calvin utilizes Scripture to make these various arguments is described in a chapter on Calvin’s covenant theology. Tuininga’s work here is remarkable in its attention to Calvin’s commentaries and the reasoning Calvin deployed to guide Christians in their attempts to be obedient to the full counsel of the Bible. Calvin’s covenant theology provides the framework for how Christians can both give an account of the abiding witness of the Old Testament—particularly the political instruction to the nation of Israel—and yet also apply it in light of the New Testament. Calvin’s important distinctions between the substance of the one covenant and its accidents, between the timeless principles of natural law and the spiritual promises fulfilled only in Christ’s Kingdom, and between law and gospel are all explored and detailed. This chapter in particular is of significance for Christians searching for a framework with which to guide their reading of the political claims of Scripture.

Tuininga brings his book to a close with two chapters and a conclusion that move Calvin’s thought toward its application in our own pluralistic Western culture. A number of surprising aspects of Calvin’s thought are convincingly demonstrated: that natural law (and not merely direct exegesis of Scripture) is central to Christian participation in the public square; that civil government is to care for religion indirectly rather than directly; and that punishment for religious heresy or idolatry should only take place in contexts where orthodox faith is embraced by the consensus of the population. Tuininga then argues that Calvin’s thought offers an abundance of resources for Christians in pluralistic societies: how they might put natural law to use in a pluralistic political order, how the doctrine of the two kingdoms might be utilized to both energize and chasten our political hopes, and how Christians might understand their responsibility to alternately submit to and resist the political order.

Calvin’s Political Theology and the Public Engagement of the Church is a standard-setting piece of scholarship, persuasively argued by the highest standards of Calvin scholarship and defended at every turn with appeals to Calvin’s extensive exegesis, the historical context of his work, and the larger fabric of his thought. Tuininga’s own suggestions for how Calvin’s thought might be applied in contemporary contexts are equally impressive and deserve to be considered by those outside of and within the Reformed camp, perhaps particularly by those already holding to some form of Two Kingdoms theology. Within the field of Calvin studies and Reformation political theology it is a work that scholars will reckon with for years to come, and for pastors in the Reformed tradition it helpfully dispels various popular arguments made about a central figure in the tradition. As a work of superior scholarship with particular relevance to our own troubled times, it deserves the highest recommendation.