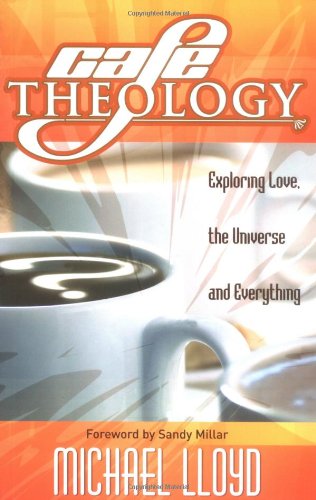 CAFÉ THEOLOGY: EXPLORING LOVE, THE UNIVERSE AND EVERYTHING

While the title might not immediately suggest it, this book is an exploration of the main trajectory and themes of Christian theology. In ten chapters, Lloyd takes the reader on a theological adventure starting with ‘Creation’ and ending with ‘The Church’. Along the way, he takes us through the Fall, Providence, Incarnation, Atonement, Resurrection and Ascension, Spirit, Trinity and the Final Victory of God. In each chapter, Lloyd provides an in-depth look at the doctrine and its implications for Christian living.

In the introduction, Lloyd presents an apologetic for the book’s title, which also offers insight into the main overriding theme of the whole work. He argues that being a Christian does not mean that we have to give up the things we enjoy, like listening to music or going to cafés with friends, rather it means that we can embrace all of life for God made us to enjoy creation in all its physicality. In writing this book, then, he is offering ‘a theology that embraces and revels in the variety and physicality and relationality and creativity of God’s creation’. In other words, he is not attempting to write another systematic theology, but his goal is to show how Christian theology transforms, shapes and enlarges life. This is made clear not only in the chapters themselves, but also in the resources he gives at the end of each chapter. He doesn’t point to further reading alone, but also to ways that we can live out our theology, whether that means ‘green’ living (because Creation is good and has a destiny) or living in ways that prioritize community and relationships (because God is Trinity).

The book is clear and accessible, interesting, engaging and highly readable. It is not intended to be an academic tome, but it is aimed at every Christian believer, as well as those who are investigating the Christian faith. Though it should be pointed out that Lloyd makes it clear that he is writing, unashamedly, from an ecumenical position, and that he wants every Christian tradition to find itself represented in the book. This desire for ecumenism influences his theological position at some points, as well as the books he recommends for further reading. These represent a variety of traditions. The book, however, is predominantly evangelical in outlook, and greater weight is given to evangelical authors in the recommended reading.

There are a few criticisms. First, it would have been helpful to have had more engagement with Scripture. There were times when you got the feeling that certain truths had to be right because of reason or experience, rather than being true because they were found in Scripture. To be fair, some chapters do contain more Scriptural references than others, but where they were lacking it was hard to determine what priority Scripture held in making the argument. I also had tensions with the chapter on Providence, and I thought that in Lloyd’s great care to preserve human freedom something important was lost regarding God’s power and sovereignty. Lloyd seems to present a God who is in some degree captive to our decisions, and I was left wondering if he had at least leanings toward open theology.

However, I thought the chapters on the Incarnation and the Resurrection and Ascension were some of the best I’ve read on these doctrines. They are particularly insightful, challenging and encouraging. The book would be worth it for these chapters alone.

For me, the most valuable contribution this book makes, is that it shatters the myth that theology is boring and irrelevant. Lloyd’s point that theology has to do with all of life, and indeed transforms all of life, is a message that needs to be heard, in both the church and the theological academy.