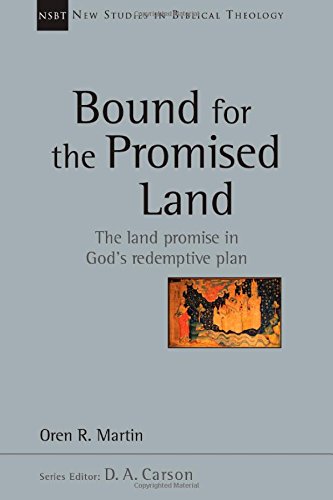 Bound for the Promised Land: The Land Promise in God’s Redemptive Plan

Issues related to the physical land of Israel crop up as regularly in theological discussion as they do in current affairs. The stakes in both arenas are high; the resulting rhetoric is understandably fraught. It is against the backdrop of this complex debate that Oren R. Martin presents Bound for the Promised Land. Yet, rather than shape his study around current questions, Martin—who is Assistant Professor of Christian Theology at Boyce College and the Southern Baptist Theological Seminary—pursues instead an inductive and biblical-theological exploration of the land motif as it develops through Scripture. Martin’s offering thus holds promise for readers who want to gain a clearer understanding of what the Bible does and does not claim regarding the promised land as well as how territorial promises intersect with other Old and New Testament themes.

The book’s opening chapter sets out the parameters of the study and establishes both the general approach taken as well as the assumptions held by the author. This introduction is followed by a second chapter which presents a bird’s eye view of “land” as a core component of God’s unfolding kingdom. The point of departure is the evident similarity between Eden and the New Jerusalem, between creation and new creation—i.e., the profound intertextual play between the opening chapters of Genesis and the conclusion of Revelation. Within this broad canonical frame, the chief contours of the intervening history are sketched in preparation for the chapters to follow.

The bulk of Martin’s work expands on the sketch presented in chapter 2 by taking a more detailed look at several major blocks of Scripture in order to assess them for their particular contribution to the broader topic. Seven chapters examine in turn Genesis, Exodus and Deuteronomy, Joshua through Kings, the Major Prophets, Matthew and John, the Epistles, and finally Revelation. Based on his findings, Martin concludes that the land promised to Abraham both addresses the loss of Eden and serves as a type of the new creation that is made possible through, and inaugurated in, the person and work of Jesus (p. 161). Throughout his investigation Martin uncovers key data which are marshalled to form a number of conclusions. A final chapter posits some theological reflections stemming from the study. These reflections are particularly geared to the topic of land as understood by dispensationalism on the one hand and covenant theology on the other.

Bound for the Promised Land models a sound biblical-theological method, one that rightly acknowledges the complexity of a whole-Bible approach. Throughout, readers are also helpfully steered through a number of complex debates (e.g., the mechanics of typology) without being inundated with technical language. Two insights were of particular note (for this reviewer at least). The first relates to Martin’s helpful discussion of the Abrahamic covenant (pp. 63–75). The (un)conditionality of the promises to Abraham is a well-known crux. Nevertheless, having surveyed the unconditional and conditional elements evident in Genesis, Martin offers a helpful synthesis. He suggests that obedience does not condition God’s fundamental intention to bless Abraham but is nevertheless the means of fulfilment and thus has implications for the historical experience of covenant blessing (p. 71). A second point of note is the discussion of Matthew’s Gospel (pp. 119–28). Here, Martin aptly demonstrates the rich intertextual connections which serve Matthew’s aim of presenting Jesus as the “typological fulfilment of Israel” (p. 123) in whom the blessings linked to the land find their ultimate expression.

However, I also have some reservations about Martin’s book. The first relates to data omitted from the study. While a work of this size cannot hope to cover everything, some lacunae are glaring. For example, cultic texts are virtually ignored. Hence, discussion of Exodus—unpersuasively termed the “epicentre of the Pentateuch” (p. 78)—focusses entirely on Israel’s deliverance from Egypt (chs. 1–12). Yet this anthropocentric reading misses the importance of the tabernacle cult as a means of restoring creation and facilitating the return of Yahweh’s glory to a terrestrial abode (cf. Exod 40:34–35). Similarly, ignoring Leviticus means no interaction with the unique statement that the land belongs to Yahweh and not Israel (25:23), the allusion-laden imagining of Canaan as a new Eden (26:3–12), the problem posed by land pollution (18:25), and other such references to land. Also neglected are the Writings which do not receive any sustained treatment; the blocks of OT texts addressed only sample the Law and the Prophets.

A further issue arises in chapter 2. Here, Martin sets out to survey the land theme through salvation-history. In order to do so, he opts to integrate “land” within a broader discussion of “kingdom,” stating that “the land promise must be situated in a kingdom-oriented biblical-theological framework.” However, the kingdom motif has been well-trodden elsewhere (e.g., G. Goldsworthy, Gospel and Kingdom: A Christian Interpretation of the Old Testament [Exeter: Paternoster, 1981]). Furthermore, a dominant focus on “kingdom” obscures other important themes—for instance, land as sacred space. Thus is lost the opportunity to attempt a more nuanced and multifaceted overview.

In addition, the theological reflections which conclude the book are imbalanced. While the assumptions and presuppositions of dispensational theology are explicitly discussed and critiqued (pp. 162–63), the same is not done for covenantal assumptions. Furthermore, the dispensational-covenantal nexus is a particularly North American discussion. The reflections offered, therefore, remain somewhat parochial. Moreover, no integration with other theologies of land is attempted (e.g., ecological readings, liberation theology; compare N. Habel, The Land is Mine: Six Biblical Land Ideologies [Minneapolis: Fortress, 1995].)

In sum, Bound for the Promised Land presents a valuable charting of the twists and turns the theme of land takes in the Bible and accordingly will repay a careful reading. Its notable lacunae, kingdom-dominated framework, and North American orientation, however, detract from the work as a whole.