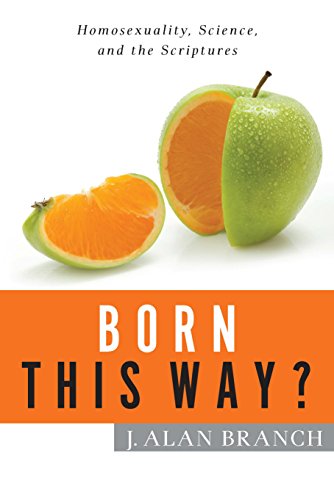 Born this Way? Homosexuality, Science, and the Scriptures

J. Alan Branch, Professor of Christian Ethics at Midwestern Seminary, has written a succinct analysis of some of the major psychological and scientific support for the argument that homosexuality is an innate characteristic. In Born this Way? Homosexuality, Science, and the Scriptures, Branch argues that “while there are genetic and biological factors that correlate with a higher incidence of same-sex attraction and homosexual behavior, as of yet there is no proof of genetic or biological causation for homosexuality” (p. 2). He begins his argument by surveying some key developments in psychological theory that paved the way for the America Psychiatric Association to revise its view on homosexuality in 1973.

In chapter 1, Branch discusses Freud’s view of psychosexual development in broad outline. He finds the data available in Freud to be somewhat mixed with respect to the origin of homosexuality. Ultimately, Branch concludes that “taken as a whole, Freud’s thought substantiates certain aspects of born-this-way arguments” (p. 13). But, his larger effect on the discussion was the way in which contributed to the sexual revolution. In chapter 2, Branch discusses the “father of the American Sexual Revolution,” Alfred Kinsey (p. 16). Although the data available in Kinsey’s studies from the 1940s and 1950s are still used in advocating for born-this-way arguments, Branch considers Kinsey’s findings suspect because the samples were not representative and he failed to distinguish between different types of data. He also notes that Kinsey’s writings discuss “what can only be called child molestation as a mere scientific observation, dignifying a horrendous crime” (p. 23). The main objections to Kinsey’s data is that his methodology is informed by his own libertine sexual ethic in a way that skews both his collection sample and his interpretations of the data. Furthermore, more recent research undermines his conclusions, especially his claim that 10% of people are gay. In chapter 3, Branch connects the social scientific research of figures like Kinsey to the removal of homosexuality as a disorder in the DSM-III (a diagnostic manual for psychology). In particular, he credits the work of Evelyn Hooker in showing that homosexual and heterosexual men score equally well on tests of mental health. However, Branch also argues that political action and intimidation played a significant role in the revision of the manual due to protests at the 1970 APA meeting. The effect of the change led to a focus solely on biological or genetic causes for homosexuality, in many cases ignoring social factors. “Psychiatry now assumes homosexuality is innate” (p. 39).

In chapter 4, Branch argues from the plasticity of the brain against born-this-way arguments. Because experiences, choices, and activities actually affect the structure of the brain, Branch argues that we remain morally accountable for our actions regardless of our temptations. In chapter 5, Branch builds on this case to respond to born-this-way arguments that hold that prenatal hormones are the cause of homosexuality. A seminal theory to that effect (the Ames-Ellis hypothesis) holds that the level of testosterone exposure prenatally has a profound effect on later sexual attraction. Branch concedes that “CAH, CAIS, and 5-Alpha Reductase Deficiency do demonstrate prenatal hormones can possibly play a modest role in the sexual identity of homosexual adults,” but such conditions are “the exception and not the rule” (pp. 63–64). Branch holds that in contrast to experiments on rodents often used to analyze hormonal effects on sexual behaviors, “humans are volitional: we make choices based on many factors which are often difficult to interconnect” (p. 65). Further, the evidence available from studies on disorders of sexual development do not prove that “homosexual males are born with female brains” or vice-versa (p. 65). These arguments are further developed in chapter 6. Studies simply do not provide evidence that would allow someone to conclude on the basis of a brain scan what someone’s sexual orientation was, or that there is clear sexual dimorphism in human brains.

In chapter 7, Branch switches gears to address twin studies, which are used to argue for a genetic basis for homosexuality. He argues that modest evidence available for born-this-way arguments due to higher incidences of homosexuality among co-twins is often exaggerated. Furthermore, the twin studies demonstrate more clearly that “homosexuality is not a trait similar to hair color, skin color, or eye color” since its concordance rates is no similarly 100% as it is for such traits (p. 92). In chapter 8, he develops this analysis in a review of DNA studies, and in chapter 9 he discusses other arguments that attempt to link homosexuality with a measurable cause, such as birth order. Chapter 10 surveys some major studies of sexual orientation change efforts, finding the results ambiguous. These chapters are handled well and survey the relevant data in a way accessible to non-specialists.

Chapter 11 is the most important chapter of the book because it summarizes his findings and offers an evaluation from the Christian ethical perspective. The psychological and scientific data available on homosexuality is unable to identify necessary and sufficient causes for homosexuality although it has discovered correlates. This means, Branch notes, that no one is “predetermined to engage in homosexual behavior” (p. 139). Underlying conclusions to the contrary, Branch holds, is a worldview inconsistent with Romans 1, in particular because it suggests that one’s actions are outside of one’s control. He concludes by saying that that “a life of moral virtue requires more than the vacuous excuse, ‘I was born this way.”” (p. 152).

This book is succinct and well-organized. Branch handles the data fairly and clearly outlines his approach and his presuppositions. He is content to provide difficult answers and let the conclusions be ambiguous when the data is ambiguous, something both sides of this debate rarely are willing to do. He should be commended for his work in this regard, especially because he addresses a hot-button cultural issue in which nuance is not often appreciated. I would recommend the book for the lay reader or the classroom. Even non-Christians would benefit from an engagement with a winsome analysis of the scientific studies from the Christian perspective.

My only criticism is that he does not spend more time in developing the themes of his final chapter. Underlying the entire question whether biological or genetic factors causes homosexuality is the assumption that, if they do, then the homosexual person cannot be culpable for engaging in homosexual behavior. But, that is wrongheaded even on a non-Christian view since a genetically induced desire does not force me to act upon the desire. To say otherwise is, as Branch puts is, morally vacuous. The more penetrating apologetic difficulty to be addressed on this topic is why God should allow us to have desires upon which we would never be in a position to act without wrongdoing, but this is no longer a problem for homosexuals: it is a problem for all sinners. Of course, to address such things would have required Branch to depart from his immediate purpose, which I believe he handled well, so this criticism is less a reflection on what he has produced than it is a desire to see some further discussion and direction for the reader on these matters. Perhaps, he may address such things in a later volume.